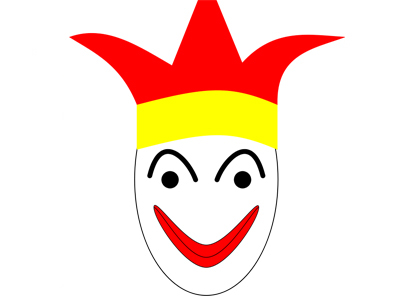 Blasts through a red light after his pester,

There is a little burden the one of proof,

He wears like a shoe thrown from his hoof,

For the bejewelled cock he has in pocket,

He knows he will never be able to hock it,

Those on his heals the ones packing heat,

Will pull vital bits of flesh and of bones,

For You Tube videos taken mp4 on their new iPhones,

He managed to lose those shoes that were giving him hell,

A red one with yellow, a blue with green both with a bell.

Still right behind him as he turns the corner,

“Get out of my way” he shouts at the folk,

That could probably get trapped under his spoke,

This is no good Mr Hester starts to think,

I need to dump this clown car with paint work in pink.

For he really does believe he can be seen from outer space,

Retasked satellites that the CIA are putting in place,

The cock in his pocket was taken from someone of merit,

Something to be left to a museum not to inherit,

He mounts the sidewalk and kills a newsstand,

Whilst avoiding traffic following a map stencilled onto his hand.

People jump up and scatter both to the left and the right,

The news helicopter temporarily out of sight,

He goes straight through the next intersection his foot hard down,

Cars skid away from this uncaring speedy clown,

He shouts out loud just to confirm,

Now the people chasing him way back behind,

Are not the police but friends that are blind,

The thought would be nice to be followed by police,

Whilst getting changed he puts on a jacket of fleece,

For the police will ask questions and not point a shooter,

A blahhhh on his horn sounds like a hooter,

Gun shots are heard they bounce off the ground,

Deliberately fired at the wheels of this hound,

His friends they want what they all have stole,

Mr Hester took from them and escaped down the hole,

He took a sharp left speeding on right,

Passed a train over the tracks gosh that was tight,

His pals they were left behind after that move,

He hit the brakes heavy and turns on the groove,

He slowed down a little, enough just to change,

A wool suit he adorns as he gets out of his steed,

In the car park he can salute his excessive greed,

He walks onto the platform and into a train,

On his way to a place that will never rain,

For he has no fence but a reward was his aim,

I found this on the road just outside that is his claim.