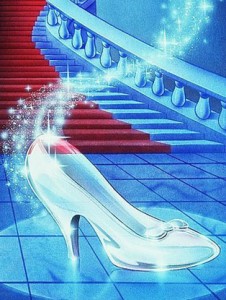 “Do you know why I stuck the picture of Cinderella and the prince behind the door?” asked my 6 year old daughter?

“No,” I replied, eyeing the sickly sweet Disney picture and  mentally making a note to remove the picture from the door and to clean the gummed residue.

She was putting on her sandals to go to a neighbour’s house to play. I was going to drop her there.

She asked me again, “You know why?” I shook my head and waited watching her struggle with the buckles and finally get up and straighten her skirt.

“Because, when I am old enough, I am going to marry the prince, and you might miss me when I leave to go to live with him in his house with his mother. You can then look at this picture when you are feeling sad.”

My two daughters had spent the weekend with my parents. My older daughter told me that they had spent Saturday evening looking at baby pictures of my brother and me. “Paati said she has many pictures of you as a baby, but few of you as a woman,” she had said.

“I suppose you and your prince can both live here,” I suggested.

“I don’t know,” she mused, “The prince’s castle may be better than our house, and I might prefer it there.”

“But wouldn’t you come to visit me?” I asked

“We might be busy,” she said, “Look how busy you are running an office. We will be running a whole country.”

“That could take up a lot of your time,” I responded as we neared the neighbour’s gate, “So perhaps I should move to live with you.”

“Your father is not a prince,” I pointed out.

Then there were shrieks of joy as her twin friends came to greet her and dragged her into their house. I returned home and stood for a while studying the picture of the prince and the princess dancing. The I contemplated removing the picture, but decided to leave it there. Perhaps, I should spend a little more time with my mother. Prince or no prince…