You are here: Home / Childhood and Kids / Diwali: Festival of Light from India

“Chi… chi… chi… he… he… hi… hi… kids, do not be scared. I am your friend Die Hexe. Today I am coming to India, to my best friend Isha’s house. Wow, whole India is fully decorated with billions of twinkling diyas (tiny earthen oil lamp for light). 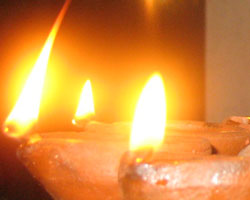 It is so beautiful to see it from sky. I need to glide my broom carefully because kids are firing crackers and rockets in the sky. Overall it is so festive. Let me tell you story of this festival of lights called Diwali or Deepavali (rows of lights) until I land to Isha’s decorated courtyard” …and Die Hexe started the story about Diwali

Diwali, the festival of light, is celebrated in India from mid October to Mid November. It signifies the victory of good over evil. This festival is celebrated by many religions — Hindu, Buddhist, Jain and Sikh — across the country. There are many stories attached with Diwali. I am telling few of them:

People celebrate this festival as killing of demon king Narakasur. He was son of Lord Vishnu and Earth. He turned evil, ill treating innocent people, saints and women. He was blessed to be killed only by his mother. Lord Vishnu incarnated as Lord Krishna and Earth as Satyabhama, Krishna’s wife. They started war against Narkasur and killed Mura, Narkasur’s Army General. That is why Krishna is also called Murari. After that battle intensified. Whole world was scared because of fierce battle. There were heavy storms and thunders coming out from battle field every now and then when Krishna’s and Narakasura’s weapons were striking together. Finally the demon hurt Krishna by his trident. Krishna fainted. It was divine plan as Narakasur was destined to be killed only by his mother. Satyabhama became very angry seeing her husband fainted in battle field and took the charge. She doubled the attack and finally killed Narakasur. While dying, Narakasur requested a boon from his incarnated parents to celebrate his death with colourful lights on the earth. Since then we celebrate Diwali. 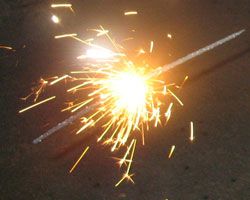 Diwali – Festival of Lights from India

Another reason to celebrate the festival is return of Ram to Ayodhya after killing demon king Ravan in Lanka. Whole Ayodhya was very happy to see Ram after 14 years and celebrated this day as victory of good over evil by decorating the country by lighting diyas. Since then country celebrates this day as Diwali. You may read more about Ram and Ravan in Vijaya Dashmi story.

For Jains and Buddhists also this day is of significant importance. On this day, Jain’s 24th Tirthankara, Lord Mahavira attained Nirvana or Moksha (state of being free from suffering). For Buddhist, King Ashoka accepted Buddhism after winning the Kalinga war. He was very hurt by seeing multitude of violence and decided to serve Lord Buddha and live his lessons for whole life. 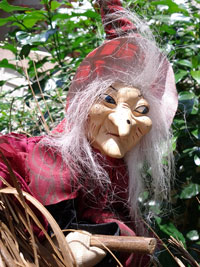 Kids, this day teaches us lesson of brotherhood, love and harmony. We celebrate this day as day of freedom, day of nirvana, day of enlightenment, and day of triumph of good over evil.

“Chi… chi… chi… he… he… hi… hi… Here comes Isha’s house. I could see her firing crackers with her friends. Now it’s time to land. That’s all for tonight kids!!! Keep lighting diyas (symbol of good) to win over darkness (symbol of evil). But be extra careful when you fire crackers. Wish you all a very happy and safe Diwali. bye…” …and Die Hexe, gliding on her broom, started landing in Isha’s courtyard to celebrate Diwali.