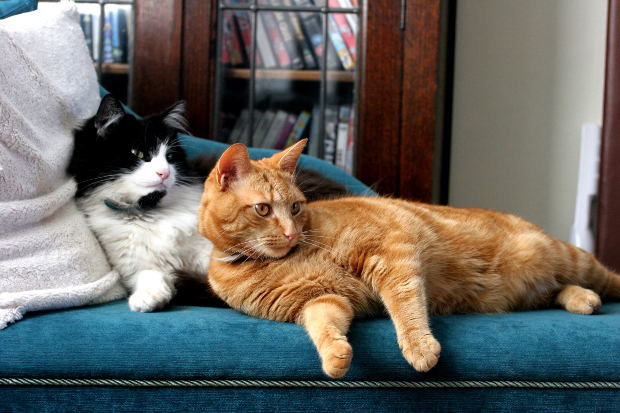 The little cats gathered round the tv. Their owner had left the house earlier. Upon the bean bag situated in front of the tv baby kittens were being born.

“Dear god look!” Amy the little kitten pointed at the tv. “There are bears trapped in the box granpa”. On the tv a prison scene was running.
Little amy pawed at the screen trying to rescue the trapped bears.
“You cant help them little one” granpa cat said.”the bears always have little bears in there and the just sit and watch them they don’t feed em or nothing.”
“Why do you call em bears” momma cat said” “they are called man.”
“Bears is what my papa called em and bears is what they will always be” grandpa said.

“Aawwoo” mother cats pregnant daughter howled in the pain of the first kittens birth.
The cats all gathered round the pained mother to be.
In 10 min all 5 kittens were born.
The last and littlest one who the mother named catey wandered of the been bag little eyes still closed and fell over.
“Awww” all the watching cats said in unison.
The kitten was expertly piked up at the nape of the neck and put back into the world of cuddles and cosiness of its mother.

There owner came back from the shops, she passed through the hallway and stopped puzzled: she thought she could hear voices in the living room chatting. She came in the living room and the voices suddenly silenced. There was no one there but the cats and new born kittens.

“nobody here” she said.

“Aww baby arent you lovely, look at your lovly kittens” she petted the mother and her kittens for a while and then went into the kitchen to make dinner and feed the cats.

The cats remained silent; if there is one thing the great bear had told them it was that the man must never find out he had gave them the ability to talk. The knew that they would be taken away and would be dissected.
They had been caught by surprise when there owner entered.
The great bear had promised to return one day and give them their mission the reason for his gift.

The woman fed the cats ate her meal then left.

The cats resumed there vigil on the kittens.

Clouds formed in the living room.
The shape of a mans body could be made out then clearly there was a man standing there he had white hair and a beard.
“Hello there little ones, i am god” he boomed.
Grandpa exclaimed”its the great bear”.
“Im not a bear grandpa max” god assured.
“You look like a bear” granpa replied.
“It dosent matter. I cave come to give you my mission to change the world as it was and spread my wisdom.”

God chatted to the little cats for an hour some times waving his arms about descriptively.
“And there will be many of you..
The whole population of dogs and cats to be precise.”

Sitting is the diner at the centre of town and looking out onto the street
A man dropped the doughnut out of his mouth and gawped.
In the street thousands of cats and dogs were migrating through town and out to the freeway.

Extending his hand the president met the trotting alisation. photos flashed. the president was a religious man and had no doubt these animals were from the almighty.
“Is Jesus happy with me.” The president asked.
“Whats Jesus the alisation replied”
“Dont you know?”
“I have a message from god.”
“What did he look like?”
“Like an old man.”
“I have to whisper the message in your ear.”
The president kneeled down and lean closely.
The alisation ripped out the presidents throat.

Hundreds of thousands of people died that day. The cats and dogs slaughtered many people chanting “sinners repent! Sinners repent!” As they were instructed.
After words the animals accosted the microphone and said their prepared statement.
“People of the world you have been punished for your sins. We will now go back to our homes were we will return to our normal way. We will no longer be able to talk. Don’t blame us we were doing the work of god.