You are here: Home / Science Fiction / The Sojourn 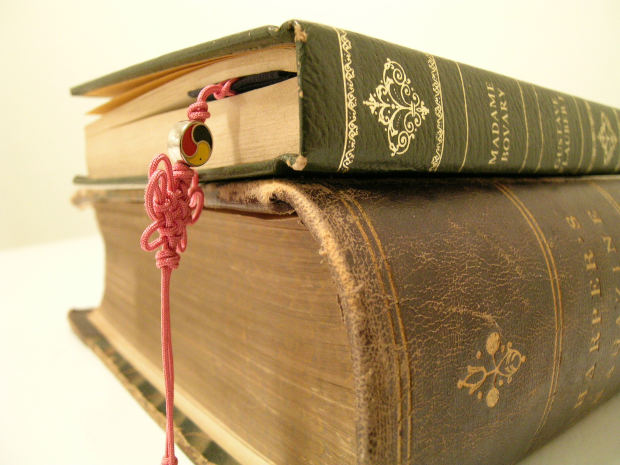 Adam’s grandpa watched as Adam flipped through his book. He moved closer. “What are you so busy with?”

“I’m reading a book on world transformation. I want to change the world!” Adam said, barely lifting his head.

In a lost city of Dokin, Sinai the sage stamped his boots into the dusty tavern floor, drowning wine and expending his voice drunkenly into the deserted winds of the cold harmattan night. His long white beards were doused in wine and his tommy protruded, yet he showed no sign of giving up on the half-empty jug which lay on his table. Ari, the inn keeper sat asleep in a corner, snoring loudly like a starved pig. Halfway through his cup, Sinai smashed it against the wall suddenly and started groaning, carrying his head in his palms. Ari was thrown out of his sleep fearfully, wondering where the disturbance had come from and saw the broken pieces of wood on the floor.

“That’s the fourth cup you have broken today. Are you possessed by a demon I am not aware of?” He said angrily and carried the wine jug away from the table, cursing under his breath.

Sinai ignored him and banged his hands on the table angrily. He felt a hand on his shoulder and tried to shove it off only to be met by a forceful resistance.

“Who are you?” He said wearily and suddenly jerked when he realized he was surrounded by palace guards. He attempted futilely to run and was sent reeling on the floor by a punch that seemed to have come from nowhere.

“Take him!” A man who appeared to be their leader bellowed and two of them carried him and he was bundled to the palace.

The next morning, Sinai was ushered into the palace hall, cleaned up and wearing a new cloth. The king sat glumly on the throne with many days of sleepless night visibly written on his face. Sinai walked along the aisle slowly to meet the king. He bowed before the king who looked at him indifferently.

“I learnt you now drink your life away in the tavern. A man who cannot bear the sting of pain is unfit to be a man no matter how learned he is. There was nothing you could have done to save your son. The crown Prince also died in that battle,” the king said.

Sinai continued to stare blankly at the floor, trying desperately to muffle the pain that was building up in his chest.

“I have been told tales of a book. The book of the seven spirits, which contains spells and secrets of the ancient world. I have also heard, that the possessor of the book will wield enough power to control the world and its seven elements. Help find that book and we can finally get revenge on the enemies which have tormented our land for decades. We can finally defeat the Cloan kingdom”, the king continued, stepping off the throne fragilely.

“Your majesty. The tales you heard are true but the whereabouts of that book is unknown. My grandfather handed down a map and a guide book saying it currently lies in the forests of Albania, buried deep in the tomb of Gutaloa, the last ruler of the ancient kingdom. The way is fraught with disasters and hardly anyone makes it back alive.”

“I will give you five of my bravest soldiers and supplies to last many days. You have a map and a guide. With that we can get the book with which we will finally bring order to this world. Be strong. You have never failed any mission. You will not fail this. You shall secretly leave tomorrow night.” The king said. Sinai nodded in affirmation and excused himself out of the hall.

The following night had the moon shining brightly overhead as six men, clad in black cloaks and armed with swords and skin bags set out on a journey whose success would have marked a revolution in the ancient world. Finath, Thapil, Hilith, Gothas, Tories and Sinai, marched boldly onto the path that would lead them to the forest of Albania. Horses were already awaiting their arrival. Sinai had carefully studied the map they had enough to know that their movement will be purely on instincts and obedience to the guidebook. In his own words, “no man has been insane to thread the paths enough to draw a map.”

“You mean we are to place our lives in the hands of an old guidebook that its integrity is not known”, Finath scoffed. He was the commander, stocky and fierce. His face held scars of sword fights and gives him the look of a fiery demon.

“Yes. Because it is the only known guide to the book of books”, answered Sinai as he hopped onto his horse. He rode in front in the group, Finath and Hilth followed closely behind, Thapil, Gothas and Tories lined at the back.

After eight days, they finally reached what was clearly the forest of Albania. It was bounded by a black river, whose odour was like that of a dead desert vulture. There was no bridge, yet of short width and unknown depth. They dropped from their horses and held tightly onto their nose to deliberate on the next course of action.

“Thapil, put a leg in it so we could find its depth”, Finath commanded, but Thapil shrunk away and shrugged. Sinai watched as they brawled before calling them to order. He checked hurriedly through the guidebook for directions.

“Hear, hear. The book speaks of a river so dark that makes light scared. It holds death beneath and life above. Then it said The depth of a river is not known until you’ve taken the first step”, he said and took a step into the water as they watched, disgusted and waiting to see if he’ll drown in the murky water. The river was shallow and created a rather pleasant sensation to the feet. Reluctantly, they stepped after him gently. As they stepped on the other side, suddenly, strange black birds fluttered out from the trees in a pack and hooted loudly in the sky. Thapil immediately ran back. “I’ll wait for you here. I can’t enter that forest.”

They progressed without Thapil, after failing to convince him otherwise.

To their surprise, they found a path in the forest and followed happily. After some minutes, they found blood trails along the path, and they discovered a dead coyote and Fox lying with their guts turned out.

“Must have been attacked by other wild animals”, Gothas said and received affirmative murmurs.

“Stop! I heard something” Sinai cautioned as he carefully scanned around, hoping to see what made the sound.

“I heard nothing, old man. You probably heard dry leaves rust–” Hilith screamed out terrified. A snake had bitten into his leg and blood splattered away.

“Stay calm. Don’t move” Finath said and quickly dug into the bag for a rope to tie the wound with. After the blood stopped and his wound was covered, he could barely walk and limped, supported by Gothas and Tories.

Dead animals continued to welcome them as they walked into the heart of the forest where they finally got to a cave.

“If what I heard is right, then this is the tomb of Gutaloa.”

Several arrows lay scattered around, and dry blood stains coloured the entrance. Bodies of soldiers lay maimed around and a large stone had been visibly shifted from the face of the tomb.

“There must have been a clash here. Some people got here before us,” Sinai said with an air of certainty.

“You mean they killed each other off?” Gothas asked, pointing to the bodies clad with different uniforms.

“That book can be enchanting”.

Cautiously, Finath and Sinai entered the cave, kicking aside bodies from the entrance. The cave was dimly lit, but was clear enough to reveal a pit. Fear grope their hearts as they took each step closer. On the chest of a dead soldier who had an arrow poking from his belly was a tattered book. Sinai carefully took up the book and eagerly opened the pages hoping to find the ancient runes and spells. He flipped through empty pages till he got to middle to find a single line of words written boldly, “Only when change is wrought in the heart of man, can the world be changed”.

“Now you see, my son. Books can only change the heart of man. It is only when man seeks such change that the world will change”, he said and retired into the night.

Adam sat transfixed, closed the book and drifted off to sleep.