You are here: Home / Social and Moral / QUEEN MONARCH 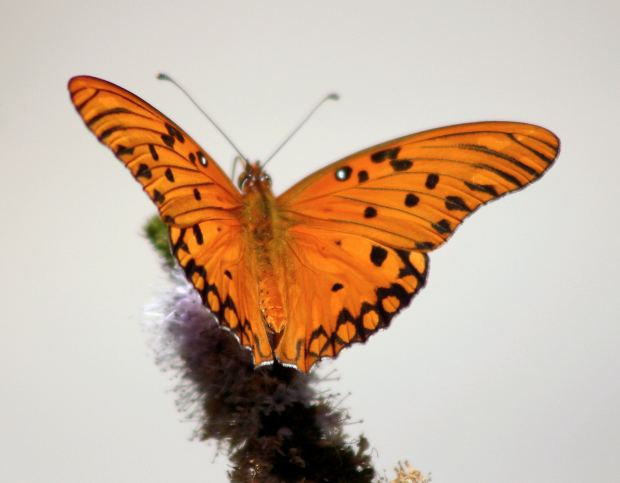 On a snowy evening, as the chilled wind froze the tiny water droplets, every creature had comfortably tucked inside its dwelling. Besides the soft falling flakes that created a beautiful painting in the air with its white fluffs, nature seemed to be in hibernation. Forests of conical shaped trees looked white and a mirror like surface had been formed on the land.

Mountain peaks were glazing white against the blue canvas of the sky and the vista was scenic.

A young butterfly peeped out of her shelter, a hollow trunk of the larch tree where she had been resting since last few days…

Tired of staying inside and missing the beautiful enchanting view and her buzzing friends she decided to move out to explore the new season.

This was her first winter and she had never seen such calmness and quietness around..

The warmth of spring always gave her delight and joy; she loved to dance between the colorful flowers and the small shrubs. Trees often were not her muse and she gazed at them in awe, for their size would always remind her of how tiny and fragile she was! Often she mocked the old Larch for its withering and falling leaves and how boring it looked without the green leaves.

She had been deserted here amidst the snowy mountains since the last two days while the rest of her friends have migrated from the Canary coast..

She remembered the last day when they departed. All were so happy and gay, jumping and dancing over the perches and the fallen leaves. The fall had turned the ground into a golden brown carpet. It was all enthralling and everyone was thrilled for the new voyage they would soon be undertaking. Their leader the King Monarch had announced, “The signs of nature show it is the advent of winter and we need to migrate from this place where we have enjoyed our days in bliss to look for another warmer region. We would be flying southwards and everyone shall be following the pattern as decided”.

The young one was not interested in what the King Monarch was saying.

Immersed in the joy of being able to suck the nectar for the first time, she was overexcited. It had taken several hours of training and persistent effort to be able to feel the real pleasure.

The California Milkweed was screaming at her, “You can never do it. Look at your antennae, they look so thin and blunt and your wings, they haven’t got the gorgeous colors.”

She always hated the Californian milkweed who kept on abusing her every now and then.

Her mother however kept on saying, “Don’t worry darling, you are the prettiest imago that anyone has ever seen. Mark my words, my future Queen Monarch.”

In few hours the group was supposed to leave and the young one whom her mother admiringly called Queen was nowhere to be seen. The mother butterfly got anxious and started looking for her everywhere. She asked her friends, the bees buzzing nearby, the tiny birds who knew her daughter and the affectionate Swamp Milkweed who had fed the little one when she was a caterpillar.

The Swamp Milkweed had been really sweet and supportive during the early days of transformation of the little one from caterpillar to pupa and when her new wings had started emerging. She had taken good care of the young butterfly when her mother would be away. But now she had dried and stood lifeless for she was too delicate to withstand the fall .

No one could tell where the young Queen had vanished.

It was the last order of the King Monarch, the bunch of butterflies set off for their annual migration without getting late. Desperate and sad, her mother wished for the young Queen’s safety.

Meanwhile the young Queen had got lost in the forest. She till now hadn’t learnt the art of navigation and finding her destination. Flying continuously for hours her wings got tired, she was panting and decided to rest. Her weak wings fluttered and shivered as she rested on a nearby perch. Confused and frightened tears started rolling down her beautiful wings. Never had she felt so lonely and afraid of the new surroundings. Weeping continuously and screaming for her mother, she dozed off.

The whole species till then had started their flight in the decided pattern. It was going to be a long flight as they had to cross the Atlantic!.

The silvery image of the ground shocked her and she got startled by looking at the scene.

It didn’t take her long to realize that the season had changed and it had started snowing although she had never experienced this before.

She remembered the stories which her mother had told her during sleep time about the eerie winter, the frozen days, and the fear of getting caught by bigger insects. Slowly she slid inside the hollow trunk of the birch on whose perch she was sleeping.

Never had she imagined the huge tree could give her comfort and save her from the cruel destiny. How many times had she cursed the tree for scaring her to death with its gigantic posture?

There was nothing she could do inside that dark place besides sitting quietly and ponder over the mistakes she had done. She had been rude to all and mean to the ones who were smaller to her.

It is said that we often try to retrospective our decisions and mistakes when we are alone and are in solitary confinement. The everyday engagements and routine of our life makes us move away from the real inner self. It keeps on struggling to talk to us and wants to communicate, but we fail to hear the voice in the noise of our chores.

The tiny butterfly too was repenting in what according to her was a blunder, for she had been left alone in this place on the mercy of God.

Never had she believed in such an entity when her mother had told her about the real creator of this Universe. “How foolish had I been,” she thought.

Scared of the unknown which was now hanging over her mind, the thought of remaining hungry and falling prey to any bigger creature was terrorizing her.

Suddenly she heard a loud voice, “What makes you cry, my little one”?

She got surprised, it wasn’t her mother’s. She looked around and found no none .Presuming it to be an illusion she again became sad.

The voice echoed again,” What makes you cry, my little one”? Do not fear, I am the larch tree in lap of whom you are resting. You are safe here from the chilling wind and the falling snow.”

“Then what makes you sad?”

The young one rose up and said, ‘My mother has left the place along with our group for the annual migration and I am left behind. I am alone and I do not know the way to reach them.”

“There is nothing to worry, dear,” smiled the old Larch.

“Follow the direction to the south, they always move towards the south during this season. I have been standing here since ages and I have seen generations of  butterflies moving and coming here every season from the south.”

“But, I do not know how to find the direction”, cried the little one.

“Remember child, we always don’t get to learn everything from the wealth of knowledge,  our intuition and the inner voice speaks to us then and shows us the right direction.”

“You heard your voice when you cried alone, isn’t it?”

“Then follow the path that your heart says is right, when you are lost and seek a new way. It will always guide you correctly. What we require is the courage to take the step and the persistence to remain focused, to continue the journey”.

She heard it again, “Persistence”. Her mother had told her about this.

In our life when we usually get confused over things which do not seem right , when we are on the junction of paths to decide which of them is the best , it is the inner voice that helps us then . It is our own, just that we need to communicate with self and hear the decision.

Knowledge blinds us with logical reasoning and we believe only in the things that  we have read. But the basic journey of life is not undertaken based on such learning , it needs the practical experience of going through all the phases which endures us and make us more determined and strong.

It is this wisdom of life which is not inherited or explained, nor learnt from books or taught. This is the personal learning which gradually makes a person mature and wiser through his own set of observations, experiences, set backs and journeys.

The Queen Monarch smiled and thanked the Old Larch for the wisdom.

Next morning she started her journey alone trying to find the perfect direction to reach her destination. She mustered courage and infused in her wings the strength for her first long flight and as she took off she could sense the direction in which she was heading.

It is said that butterflies can use the earth’s magnetic field for orientation. The antennae contain cryptochrome, a photoreceptor protein sensitive to the violet-blue part of the spectrum. In presence of violet or blue light, it can function as a chemical compass, which tells the animal if it is aligned with the earth’s magnetic field. The complete magnetic sense is present in a single antenna.

Similar sensory system is also present in humans, which we aren’t aware of and which we try to forget about.

The key to this wisdom lies within us. The voice of the unknown Larch is the inner voice of our conscience. The trunk of the Larch which saves the young butterfly is the Lap of God which saves us from every disaster and trouble.

The young butterfly is the young mind of ours ,which is innocent till it is a child and then as it grows, it suddenly considers  itself to be too intellect and gets lost in the path of life directionless and alone.

The California Milkweed represents the ones who like to criticize people.

The Swamp Milkweed stands for the set of close friends and family who help us during our growing times and be a important part of our life, yet they are left behind when a person has to undertake his own journey.

The Mother who teaches her young one the basic of life is the eternal mother of every being who gives birth to a new generation, who passes on the knowledge of living since generations and teaches the difference between living and survival.

The story of the Queen Monarch is a story of each one of us which explains the complete cycle of our existence since birth and makes us think about the small things that we neglect in life.