You are here: Home / Social and Moral / Ahimsa 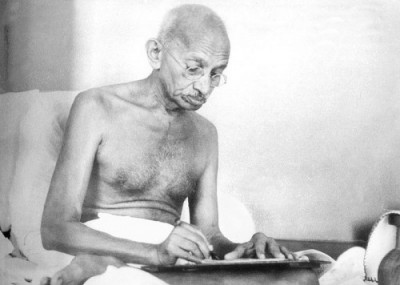 Raghuram was reviewing his geography notes in the afternoon of a bright and sunny Tuesday. The classes were about to start again in a week’s time after the midterm holidays. Coming from a remote village of India, where he studied all his primary education up to 7th standard, the place Navnagar, a Taluk headquarter, appeared distinctly different. He always carried a sense of fear in his heart, felt he is lost in this city, thrown to the water, struggling to swim and survive. He had no option but to slowly realize that this is a different world, one has to ‘change’, adopt and move on.

There was some usual noise going on at the near-by arrack shop. It used to be quite regular there. But it looked like it is getting quite nosier than usual. It had become quite heavy now with some shouting becoming louder. He stepped out to see what’s actually happening. Shocking!!! And couldn’t believe for a minute or so!!! There were two men of his father’s age exchanging nasty blows!! One of them fell on the ground and the other started punching him on his chest. The guy who fell down somehow got up and punched the other on the mouth; the blood started pouring out of his mouth. The act is repeated by the other guy and the same result. Now, both are bleeding.

After both are fully done with mouth, they started exchanging the blows to the chest and slapping each other. Raghuram started shivering with fear; it was turning out to be bad for both. The act of punching, slapping, falling down, kicking etc. continued for almost 40 minutes before both of them got sufficiently damaged and tired and voluntarily ended the fight.

Raghuram is now a much more matured person, working in a multinational company, traveled around the world, has a family with a supporting wife and an adorable Son. However, that brawl he witnessed at a tender age is still green in his mind. He is still unable to find answers for few more questions:

Today is Gandhi Jaynthi, birthday of Mahatma Gandhi, celebrated as non-violence day throughout the world. We have a duty to make a positive impact, if we really want to pay homage to one of the greatest souls.