You are here: Home / Social and Moral / Astrology’s not trustworthy everytime 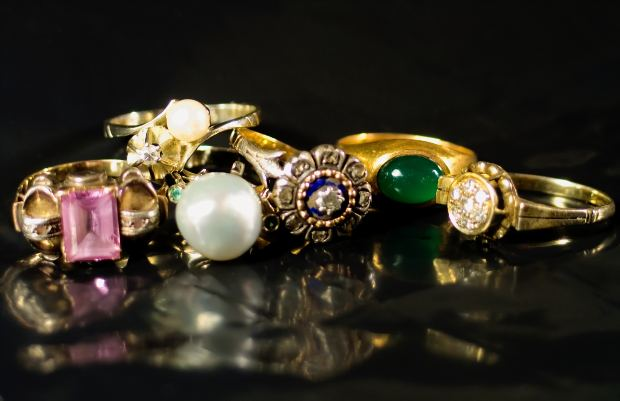 Once Swapnil was having morning tea inside the tea shop. He was about to finish the tea and leave when suddenly Suraj rushed in the shop, caught Swapnil’s hand and forcibly making him seat, ordered for two cups of tea and continued, “Dost you’ve got to help me seriously this time. I have got trapped badly. I have faith in you and so please help.”

Swapnil simply smiled and then they took their tea and Suraj continued, “Swapnil, as you would know that I have lot of faith in this puja, worships and all. Similarly I also have a lot of faith in astrology. So naturally I showed my hand to one astrologer that day and he gave a very bad feedback. He told almost 10 bad and just one good. He told that I need to buy some costly stones from him and wear those or else I would not live more than a year. Now all these stones are very costly which I cant afford and also I dont want to die so early.”

Swapnil after hearing this, thought that, astrology indeed is a good subject and has its existence. It might also become true depending on the finesse of the person which he acquires studying a lot. But the problem actually lies with those who has less knowledge, and use this saying few common statements as business to win over people’s beliefs. And common statements are also so common that it would be possible for cent percent people whoever visits them like

“You are not at all having good times at your job” – which is cent percent acknowledged by any people how much they are happy or make profit as everyone’s common nature is to expect more and more how much they get,

“You would soon have some misunderstandings in your family” – which again is acknowledged as people cant live purely without family issues for long.

As our five fingers are of different shapes, similarly each individual is of different frequencies and hence there could be a mismatch leading to misunderstandings, small or big, but the astrologer wont say big or small, or the person wont confess that he is already having one in his family even though he has one currently but would wait for the future,

“You would earn some money” – which is again true..would not anyone doing business receive money from customer, or would a office worker not receive his monthly salary?

Please note that the astrologer again wont say whether the amount is huge or small. And he’s sure Suraj might have consulted an astrologer of that kind. But seeing his faith, he also knew that it would be of no use explaining Suraj all these. He would continue to stick to what he has heard. But he knew that at the same time if that same astrologer only tells him that all his dangers have moved away, Suraj would believe the same. So what all he needs to do is to make the astrologer say that to Suraj. But how? The astrologer anyway would never confess that what he told is wrong just to maintain the trust of people on him.

So Swapnil cleverly told, “Fine, sure I think I could help you in this matter. Just give me sometime. I guess he’s a good astrologer by the way.”

Immediately Suraj took it from Swapnil and said, “Yes Swapnil, many says that he has a good capability..he’s a finesse in this field. His statements match word by word. That is why I am so worried. By the way I must say you also can try him.”

Swapnil also was waiting for this to know the place of this astrologer, as he though believes in astrology would never ever believe one of this kind. He said, “O please, please could you give me his address?”

Suraj gave him the address and left.

Swapnil immediately travelled there and saw the astrologer was having one client in front of him. He waited for the person to leave and then Swapnil went. He sat no sooner than the astrologer as usual started telling, “Tell me what’s the matter?” rather than “What do you want to know about yourself?”, so that he gets some flavour of what all going on in his life and he could well make statements based on them.

Swapnil also cleverly told, “So-so”, and then driving his right palm in front of him said, “Gurudev, tell no how do you see?”

The astrologers also don’t go less. Since he has not told anything, he would be prepared with his common statements. Moreover his telling “Soso” doesn’t mean he would agree. He’s now in driver’s seat so now his client has to believe what he says and not him what his clients say. Also if everything goes fine, then how come he could sell all his cheap stones at such a high price? He immediately looking at his palm said,”Hmm, indeed, but wont last long. Soon you are going to have bad times at your job. Also few quarrels in your family are yet to come.”

Immediately Swapnil caught his hand and continued, “So you’ve been fooling all people here. You only told me last year that if I buy few rings from you, I wont have bad times either in family or at job anymore from next year surely. Here are the rings which I opened just to test you before showing my palm.”

Saying Swapnil took out few rings from his pocket which he bought from beforhand in a very cheap price from somewhere else, same as there with the astrologer.

The astrologer got scared, as he very often says these statements. He also made out that Swapnil is not like others. He immediately made Swapnil seat pulling him by his hand and started telling, “Baba see, we are poor, don’t have that much money to study and do our living. Have tried with many businesses and now this one to earn. Have found some profit in here. Please dont destroy the faiths of people on me. I confess I know nothing about astrology and am ready to pay back your amount you spent on buying these rings from me, but don’t disclose this to anyone else.”

Swapnil said, “No need to pay me back. But when I bring another friend of mine, you just tell him that he need not buy any ring as good times have come in his life and would stay for ever. He would also live long.”

The astrologer agreed to this. Swapnil then went to Suraj and told him to come with him to the astrologer, as Swapnil would buy him those rings for the time being and Suraj could pay him back in instalments.

Suraj agreed and went to the astrologer with Swapnil. Then as expected they returned happily without any ring.