You are here: Home / Social and Moral / Looking down 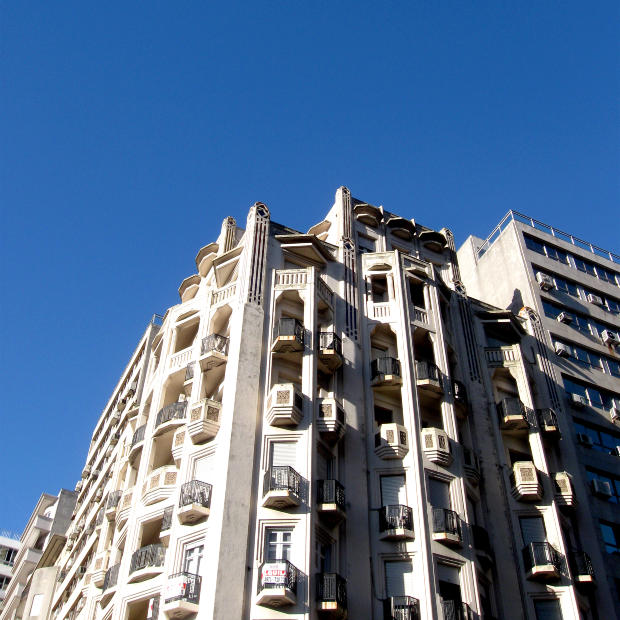 Story of A Building – Looking down
Photo credit: Alvimann from morguefile.com

The building looked down on the city with it’s many glass windowpane eyes that surrounded it’s body. It looked down on the mall workers and the mall’s customers making their way to work or to pleasure while meanwhile some homeless shuffled around in the courtyard nearby asking in sorrowful voices for a bit of change to get drunk or shoot up with. He knew not all homeless were junkies or alcoholics but it was hard to draw a distinction between the ones that were and were not so for him they were all the same. The building did not care for the homeless because they often tried to sleep in him and he did not like the way that they smelled.

What the building did like however where the pretty women that frequented his inside, sometimes they would fix themselves up in his restrooms and he would stare at them for hours as they made themselves pretty. He did not find this strange to do so because they did not really notice him and he enjoyed doing so because being a building can be so dull in the city with nothing to look at. One thing a building could do in the city however was converse with the other building about the frivolous gossip that all buildings have about the strange things people do when they think no one is watching.

Just the other day a parking garage from down the block had a great piece of gossip, the other day apparently around midnight a security officer had found a husband and wife f***ing on the seventh floor. The man was caught bear-assed with his pants around his ankles, the parking garage had assured the building and it had been a marvelous spectacle. Earlier the parking garage had explained the pair had been fighting about their child’s behavior, they were young and so they still cared about these kinds of things enough to fight about them.

“Listen Honey,” the man suggested, “I will not have her going around telling everybody that she loves all the boys in her class that’s just not appropriate for a girl her age.”

“Well Why can’t you do anything about it?” She asked frustrated, “Why does it always have to be me doing to policing in this family?”

“Honey I just meant she should hear it from a strong confident woman who knows that’s no way for a lady to act at any age and that love is something a real woman can only give up once.”

“Oh Harold,” she breathed as she exhaled her frustration in a cool breath of passion, “I know but I just want us both to be involved, you know, she needs to hear it from you as well…” he told her that he knew this and that they would work the matter out together. At this she crumpled into hot excitement for her husbands understanding of her. That is after all she had explained why she had married him.

When the security guard had found them both locked in sweaty, moaning forgiveness he was unable to say much because he caught glance at the man’s wife who was very attractive indeed and he felt a little jealous of the man as the gathered himself to firmly command the two, “You can’t do that here.” The couple at the emergence of his voice and his flashlight upon their nakedness where by no surprise to anyone, embarrassed. As they left in their Pathfinder the man’s belt was left undone as he drove through the entrance of the parking garage, his wife’s hair was a mess but she still looked very attractive still.

The Building had thought this story very scandalous indeed but at the same time he thought it to be a bit inspiring. All day the Building made sure that everyone was safe on any one of his floors, he made sure his elevators got them to where they needed to be at least most of the time, and he was always sure to contain the noise between his walls to ensure peoples privacy from one another. He did this and the people kept him tidy, the building very much enjoyed being tidy because he was built to look professional and he had become used to looking the part.

It did not bother him that he could never go anywhere outside of the city and he did not care whether or not things were dull. For being tidy and accommodating the needs of people was all that he knew and in that he found accomplishment. The feeling of unnoticed accomplishment the man who drove off with his belt unbuckled must have felt as he drove off just having fucked his beautiful wife for the first time months. Neither the accomplishments of the man nor the building would be known by anyone other than the man, his wife, all the gossipy buildings and the poor lonely security guard. Everyone was perfectly happening and nothing changed in the world for the better of all involved, except of course for the security guard who never got laid and had been the brunt of a  joke in a funny tale told by buildings.