You are here: Home / Suspense and Thriller / A lonely mind. 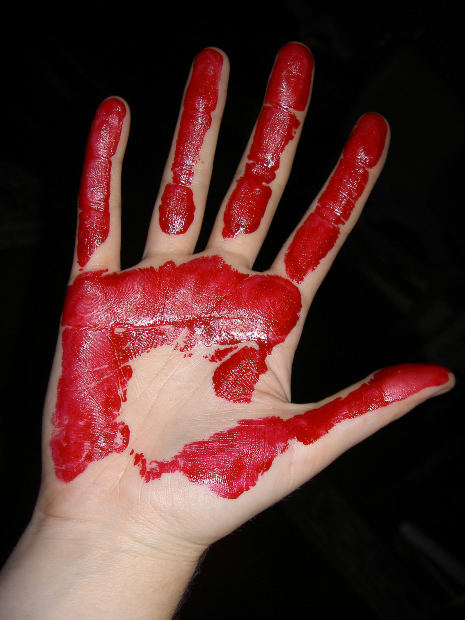 It’s a warm summer morning with the birds chirping cheerfully ,bright orange color spread across the horizon,the sun rising proudly, and the aged were laughing happily. Amidst all this, there was a young boy sitting quietly in a corner of the garden. A passerby asked him the reason, to which he quietly said,” I stabbed my school teacher in the heart ,3 times”, with an emotionless face. The lady went away speedily without even a look back at the blood stained boy.

Life would have not been easier for him without Rakesh. They met once in a summer camp. Luckily he found out they were in the some school and also lived in the same area. Kanav would’ve been the same ,most bullied boy of the school, if it was not for Rakesh. With him , Kanav developed self-confidence which he never thought he could have. The feeling of being important to someone , the joy of being needed ,a supportive hand always,no matter the circumstances. He just needed this friend all along.

It was mid march. The joy of exams being over and the vacations was blooming on the faces of children. The mere thought of spending the evenings playing football in the alley put a blooming smile on Kanav’s face. He looked at Rakesh and to his amusement he found Rakesh too looking at him with utter excitement as if he had telepathic abilities stored up only for this particular thought. Well he always looked at him with the same expression.And he looked only at him.

Suddenly mr.Raghav (Kanav’s math teacher) entered the exam room and looked at Kanav with all the rage and anger a person probably could possess. He failed for his re-test for the 5th consecutive time . He talked to Kanav’s parents about it and got their agreement for Kanav’s extra summer classes. Kanav couldn’t even imagine going to school every day , not even during working months, now he had to do that in summer too. This thought made him cry. The feeling of being separated from his soulmate made him cry even harder. Rakesh came to his rescue, consoled and calmed him ,saying that he would not let attend him classes in summer. They both went home together after the paper . The next day ,the neighbor found Mr.Raghav drenched in a pool of blood in the backyard of his house.
His heart had been stabbed three times.

The police investigating the case found a note near the body of Mr.Raghav.’his student Anatak killed him ‘, was scribbled on the paper in black ink. The police inquired about Anatak. But the teacher had no student by that name , not in any batch.

The whole school mourned for quite a few days. Rakesh and Kanav were equally too very sad. They couldn’t believe for some days, Kanav even cried for some as Mr.Raghav always gave special attention to him ,and so did Rakesh. But after some days kanav got along, also quite happy to not to attend summer classes. So he packed his books in a bag for donating those to the poor, carefully keeping a bottle of black ink aside.

It was mid may and kanav’s father was planting sunflowers in his garden(though he did that quite rarely) . He noticed a large group of flies in a particular area. At first he ignored it but on further digging , a foul smell started emanating from there.To his utter surprise,he found kanavs school uniform buried deep inside ,drenched with black stains , old blood stains.

Kanav was greatly excited so was Rakesh as it was the first day of college. Kanav couldn’t have been more happier as both the best friends got to attend the same college.

Finally they entered their college. After the first few introductory lectures , the classes were over. As the freshies put a foot outside their class, a notorious group of seniors pounced upon them like hungry wolves,ragging was it all about.

All in particular they picked Kanav as their today’s bait.They asked him for his introduction and he quietly obliged. Rakesh stood there helplessly. To his horror, one of the spoiled senior ordered him to take his shirt off and roam the college campus. Kanav refused. He pushed them and made his way through the angry seniors, to the exit. This made the whole group quite angry. They made a routine of teasing him everyday and each minute. He was so so terrified that he didn’t even had the guts to complain. He was tormented for quite a few months until the coming Sunday.

As usual kanav prepared his mind for the new horrific events that the seniors lay for him today and step a foot inside the college campus. A huge mob of people, he saw gathered near the auditorium. He and Rakesh inquired about the mob. A common friend told them that seven second year students were found dead on the terrace of the college building, all stabbed to death in their heart, thrice!!!. Kanav froze in fear as he saw their faces. They were the same seniors tormenting him. All of Them , probably DEAD!!!

The investigation team found a note in a corner of the terrace with something scribbled in black. To their surprise,there was written,”Their friend Anatak killed them.”

They found out that none of their friends name was Anatak. The evidences they found included a stain of blood in the print of what seemed like the bottom of a shoe, all above the stairs. And interrogating their fellow students, they found out that these particular seven seniors were constantly tormenting Kanav. So they interrogated Kanav for quite a some time,they too had pity on him , felt pretty bad , the way he was treated , but he kept mentioning the name of Rakesh quite a few times that Rakesh trusted him .But the officers only looked shocked every time he mentioned Rakesh’s name. As they checked the whole college nobody by that name was kanavs friend. !!!

Suddenly one of the officers looked at Kanav’s shoes and finds something familiar about them. After taking quite a few glimpses he noticed it was the same size as the stain of the blood they found. He asked for his shoe. Kanav quietly obliged . They found the bottom of his shoe stained with blood.!! Carrying on further tests they found out that the blood stains on the stairs matches those on Kanav’s shoes completely. They raided his house ,in his room was found a bottle of black ink and blood stained clothes hidden in his closet. They started interrogating him violently.

But he was constantly denying all the charges. He was crying so hard that the interrogating officer too believed him quite a few times. But due to the horrific turn of events in the past few hours ,his (officer’s)belief in reality ceased to exist. On further probing and a severe punch on his forehead, kanav’s facial expressions changed drastically. All the cries and wet eyes suddenly turned into eyes full of rage ,anger ,frustration. He caught the officer by his collar and pushed him towards the wall and shouted ,” I killed them all. I am the synonym of death , I am the Anatak.” And fainted.

Rakesh silently stood outside kanav’s cell silently watching his torture. He never blinked nor changed his expressions. But after the sudden punch on kanav forehead ,Rakesh disappeared he was nowhere to be found.

Kanav was taken to a psychiatrist as soon as the officers saw this terrifying incident. The psychiatrist hypnotized him after waking him up.
The fist question he asked kanav,”who are you?”
Pat came the reply,”I m kanav.”
As the psychiatrist was getting ready for his second question,he noticed something strange about Kanav’s face ,the innocence on his face turned into shear hatred and anger.Kanav again shouted,”I am Anatak,the synonym of death.”
The psychiatrist was utterly shocked to have being noticed something as horrifying as this.He asked,”Did you kill your seniors?”

Again a soft voice spoke,”No not at all,”followed by the change in expressions and a hard voice ,” yes! Yes! Yes! I’ve killed them all, along with the professor and also left a mark signifying my presence with each .”

The psychiatrist was surprised.

After 3 hours he came out of his office.

He was questioned by the investigating officers.He quietly called them in his cabin and told them the mental state of Kanav. He was suffering from Schizophrenia and a bipolar disorder.

( Origins)
It seems as a child kanav always was a sad innocent fellow. His parents always used to fight ,even beat each other sometimes. One day he overheard his mother saying ,’i told you not to adopt him.’ Kanav couldn’t believe his ears.He cried all night and day.Next day at school he again was bullied as usual . Due to his loneliness and feeling of being unwanted led to minor schizophrenia and he started being depressed always. After further such incidences ,he started hallucinating ,at first it was just a boy but afterwards he turned into a friend named Rakesh. Kanav found his world in him. His friendship took deeper roots inside his mind.

After inquiring a few of his fellow classmates from school,the psychiatrist found out that kanav always sat alone talking to himself ,he never talked to anyone else.So,the psychiatrist concluded that this depression triggered Kanav to creating an imaginary friend ,he called Rakesh.

Then the investigating officer asked him about the murders and about Anatak. The psychiatrist calmly replied that Kanav had developed a bipolar disorder resulting in the creation of a split personality ,who called himself Anatak,which is literally the synonym of death.

He further explained that ,though kanav found a friend in Rakesh. But he couldn’t stop the bullying of his friends.So in some corner of his mind ,he always was living in fear.This constant fear let to the development of a bipolar disorder.It is extremely rare that a same individual is affected by both these mental disorders.So inside kanav their co-exists three different personalities.Suddenly they heard someone talk inside Kanav’s room.They rushed only to find out kanav hugging himself tightly ,like an air hug,as if he was hugging someone.

After six months of rigorous treatment,hypnosis sessions and medications, Kanav was fully out of his trauma.For once or twice he even tried to kill his caretaker and run away.But finally he was ready to step a feet in the outside world.His parents came to receive him.He cried as soon as he got a glimpse of his father, who carefully once burned kanavs blood stained shirt to save their family from further problems.He finally was ready for his freedom.The journey to home ,the view, everything seemed so peaceful.Everything seemed normal.Everybody went to sleep after a having a great meal to kanav’s freedom. Kanav slept peacefully( or at least he thought so).

He woke up next morning feeling very tired and wet. He found his shirt stained with blood. And in his hand there lay a note .Scribbled in black it was written,”His patient Anatak killed the doctor.”
–END–