You are here: Home / Suspense and Thriller / Red Clouds 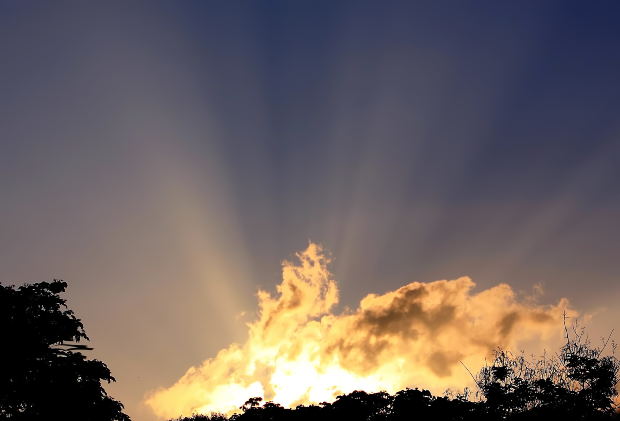 It was one of those boring summer vacation evenings. I was standing on the rooftop of my home, waiting for my buddies to call so that we could hangout. Every five minutes I flipped open my cellphone to see if i have got any new message.When i had to go school everyday, i kept wishing for the next holiday to come soon and now when i have holidays, i miss going to school.Well, that’s human nature.

A few hours passed, the sky was a dark blue color now, unlike the orange color it looked during dusk. I was just going to check out my inbox when i saw something in the sky. It was very far away and hidden behind the clouds, i could only make out its shape.It looked like a big tadpole. I couldn’t take my eyes off it for i feared that if i looked away, it would disappear forever. But i had to do something! So i started calling my friends one after another, unfortunately not even one of them picked up. Then i remembered that one of the girls in my class lived just a few blocks away.

I ran to my garage, took my cycle and pedalled as fast as i could until i reached her house. On banging on her door a few times, she came out.

“can you see it?” i asked her as i pointed towards the place where i had seen that thing.

“see what?” she squinted her eyes trying to see what i was talking about.”I dont see anything.” well, that wasn’t her fault, that tadpole thing had disappeared.

“err… never mind, so do you wanna hang out?” I said, trying to change the subject before she came to the conclusion that something was wrong with my head.

“Okay, i guess” she replied but with a suspicious look on her face. We roamed together for about an hour and then decided to go home.

“What in the world is that?” she shouted.I looked at the sky expecting to see that tadpole thing again. But this was nothing like that shadow i saw in sky. This thing looked like streams of lighting moving around something invisible, surrounded by red clouds swirling around it. A bolt of lightning emerged out of it and hit the surface of earth, somewhere far away.

” My home is nearer lets go there.” I said, as another bolt of lightning struck the ground, not too far way. We started running fast. We had run almost half a kilometer but we could not spot a single living thing, no people and not even any dogs.

“That was a close one!” I said after a bolt of lightning hit the tree a few feet away from us and set it on fire. The striking spots of the lightning just kept getting closer and closer to us. It was as if it was targeting us. I looked back, trying to see the red clouds, but it was not there. It was now almost directly above us.

” How far exactly is your house?” she asked irritatedly.

“There it is!” I pointed towards my house. We sprinted to it as fast as our legs would allow us. The gate was swinging so fast that we had to get in very carefully or it would have knocked us out. We were crossing the yard when…

When i woke up, i found myself in a hospital room. Either that or a torture room because the equipments i saw there could really do some serious cutting and tearing. You could feel the pain just by looking at them, if not then definitely by looking at the blood on them.

” How are you feeling?” a voice to my left startled me. It was a doctor.

” where am i?” i asked him, not in a tone that would be considered polite.

“Why? In a hospital of course. You were found unconscious in your yard.”

“What about the streams of lightning?And how is my friend? She was with me in the yard!”

“Oh, you must be talking about the cyclone! It was a really terrible one but its over now. As for your lady friend, she is resting in another room.” He answered my questions and then told me to just relax and sleep for a few more hours. I rested for a few minutes and then decided to go find my friend.Well, i didn’t find her but while searching for her i found some sort of a really big telescope machine. I decided it was a nice way to kill time, so i used it. The stars really looked beautiful. I also found on really good looking planet, it looked exactly like-

“Wait a second! Isnt that… But if that’s earth, then where am i?” Now i had a pretty good idea about whose blood was on those equipments and whose blood was going to be on it next.