You are here: Home / Suspense and Thriller / I will pay you all within a day 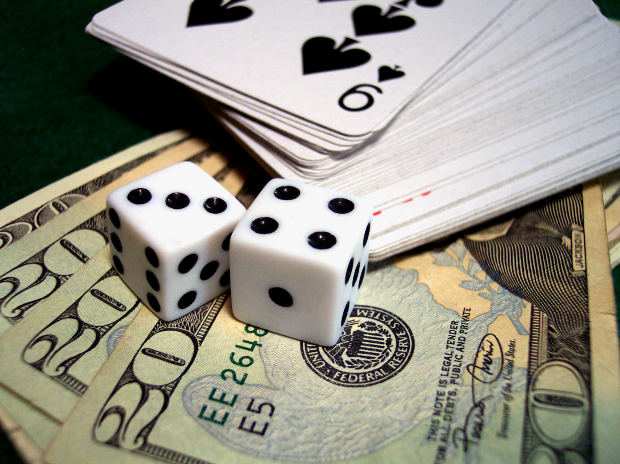 Suspense Story – I will pay you all within a day
Photo credit: cohdra from morguefile.com

I had been working in the Merchant since the last twenty years and am yet fit enough to punch down seven strong men. The story that I will tell you is something that I personally experienced in my Navy career. Perhaps you might not believe it but yes, it is true till its last word. Certainly, it becomes too tough for us, the marine people, to cope with the same food that is provided to us everyday. You might love having chicken or fish or ask for more when it is served but when it is too much for us to eat, we fall into the traps of sea sickness and that vomits, high fever and head ache becomes our closest mates.

That day, we finished our meal and came down to the basement mini pub, where the exhausted captains take breaks in between their heavy toils. That day, four of the men were covered over a bench, with beer mugs, cards spread all over it and money on the line. Yes, they were gambling at a point to alleviate the pressure out of the work. The third and the youngest in the group had a pretty bad fate for he was slowly slipping out of money, yet didn’t stop betting on the cards. The others did warn him about the in-depts, probably that would come soon but he further urged to play with the hope to win a big cash prize. With the same wish, the last time, when he just had a thousand bucks left on his wallet, made a bet of a round ten thousand to the three of the gamblers. A single card was left to change his destiny- either to bloom or to cut down. The pressure persisted on all the players- if the youngster wins, he rounds up a profit of a thousand buck and if he loses, the youngster has to pay them well enough for the entire trip.

The cards turned as, normally, he again loosed the grip to his destiny with a huge grand dept of nine thousand buck that he had to pay well-y by the next day. His face was pale, hands trembled and the wallet screeched. “I will pay you all within a day” that’s what he said before getting up from the chair, ensuring everyone that he would definitely pay it anyhow.

Gradually the next morning came. They were ordered to leave the ship through their personal crafts available and were instructed to land up at the north for them to guard the ship before it is finally landed in Pakistan. The first craft was of that youngster, who promised to pay by the same day’s fortnight. He confidently backed himself up at the dug-seat of the craft and kicked off the motor engine. The craft took a slow start up and then at a whoosh, flied up into the sky and then to our surprise, it suddenly thrashed the body in the oceanic layer with a huge erratic explosion of the waters. It seemed as if the craft was deliberately crashed by the pilot himself. I just told you the thought of the three men on board. The plan was postponed for a day and that the captain decided that the crafts would be released the next day.

Gradually, another day came and Sanjay, the one from that day was commanded to take the flight. He too confidently jumped up on the seat to fly the plane and again to our surprise, the flier immediately crashed heavily in the water bodies but this time, it seemed a natural accident. Strange, wasn’t it?

The third day, after a huge check up on the vehicles, Kabir, another bidder was told to go for the guard and the same happened to him too. The board council sat on the guard room to discuss about the fact.

“Sir, may I go for it?” The last alive man from that night’s event spoke up with fearless attitude. After several requests, he was finally allowed to leave for the flight the very next day. Certainly, he wanted to know what the fact was behind the deaths. He thought it to be the young boy who was the dept maker committed suicide and that his unease spirit made the other die too.

The next day he was ready for the trip, when he took special arrangements along with him for safety. A rubber bag, a pool swimmer and a parachute was tied to him as he rugged off the craft. After a minute of the flight, the craft felt unease for him, he trembled as an unknown feeling surrounded him. Then, the final shot that made him nervous was the speedometer that suddenly at a point turned complete zero. He knew what was next. Within few nano seconds, he flipped open the cover in urge to escape but found something pulling him around. He struggled and reached his head out of the squat covering as suddenly the craft was pulled down towards the gravity. Trickling the cover button, he flicked the parachute, placed the pool escaper under the chest and allowed himself along with the pull. The craft thrust into the layers of the ocean but the man escaped the range, with half broken hand and injured leg. Struggling back to the ship, he shared what had happened and that the pull that brought down the craft. He never thought of gambling again as he now talks with you, through this story.

It was me, who had this spooky experience at the very beginning of my days in merchant.