You are here: Home / Travel / General Alcazar’s Show in Pattaya 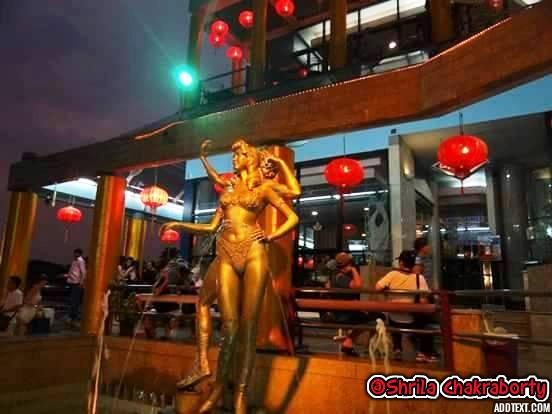 “Hey! You Indian! Miss Indian!” I looked back hearing these broken words as I was taking a stroll in the pavement adjacent to my hotel in Pattaya. It was a humid afternoon, much hotter than the Indian summer afternoons, though it was almost end of October. At first I was unable to understand that the lady was addressing me. But realizing that she was calling someone I stopped. Then I watched carefully my surroundings and understood that she was addressing me for sure because I was the only Indian woman walking with an umbrella through the footpath. Before responding to her call, I spoke to myself very clearly, “No, I could not see any other brown skin flat nosed wide eyed Indian woman apart from me right at this moment, so she must be trying to convey something to me.” I nodded to her with a smile and looked back with inquisitive eyes. This time she was waving two tickets and pronounced “Alcazar show you see?”

I had a prior knowledge about Pattaya’s Alcazar show and knew that it is considered almost a heritage show in the small beach town. I immediately bought the tickets for the Saturday show from the lady and thanked her for her kindness. The Spanish word Alcazar meant “fortress” or a palace, and is sometimes related with wars, however the Alcazar Show is only a musical extravaganza in Pattaya. The ladyboys of Pattaya present this charismatic show in front of the global audience principally to earn their living and at the same time entertain people coming from far corners of the world promoting their indigenous culture of song and dance.

I spent the lazy Saturday afternoon sitting on the beach, hiring an umbrella, relaxing, doing little tidbits like trying a tattoo on my arm, sipping cold green- coconut water, munching some roasted nuts and simply watching other people. My son, a kid then, was busy making sand castles and was playing with the sea-shells. Time passed out at its own rhythm, and at one time the sun bade good bye for the day. There were some beach lovers still basking on the sand trying to enjoy the lazy good hours for some time more. One old American war veteran, who lost both his legs during the Vietnam War and never returned back to his country, was staring towards the beach in his wheelchair. I saw his new family- he was with two little kids and his young Thai woman-the young woman was playing with her kids, the retired soldier sat quietly, I could easily notice how happy and content he was, in fact the bliss of this new fatherhood gleamed in his eyes.

The auditorium where the program was scheduled to be held was not very far from our hotel. After some refreshments we took a “tuktuk” to reach the place. It was just fifteen minutes from our hotel. On reaching the spot, we saw the symbolic golden statue of a half man half woman and understood the allusion. The letters in English “ALCAZAR” were inscribed brightly and boldly. To watch the one and a half hour program a pretty good number of people gathered with much eagerness. I took my seat some five or ten minutes prior to the show. In India, the transgenders and the transvestites, better known as “hijras” and “eunuchs” have no fixed profession at all. They are looked down upon by all and not even allowed a place in our oceanic population as the “third gender”. In fact they are treated as abominable creatures despite having no faults of their own. The ladyboys as they are known in conversational English in Pattaya are in Thai term the “Kathoey”. A majority of Thai people think that they are born because of some “Karma” in their past lives and are treated quite humanely- they enjoy a very respectable status in the society. If you are not informed beforehand that these performers have a crisscross gender orientation you will never have any inkling of doubt about their gender status throughout the show.

Expensive and gorgeous costumes, dazzling lights and intelligent focusing of these on the stage, the supremacy of the stage and dancing choreography all count up to a high international standard. Apart from the Thai cultural dancing both folk and classical, there were song and dance sequences from all over the world; these were arranged by the artists keeping in mind about the global audience, we immediately recognized the Hindi popular tunes of Shahrukh Khan and were much delighted. The popular Indian dance number was followed by traditional Japanese fan dance and other popular chartbusters.

As the VIP seats were more expensive, I had bought the tickets on the gallery however, I hardly felt any difference because of the very high lighting technology and the computerized sound system. The dances in the show were primarily based on the movements of the hands. The performances were not at all cheap and vulgar, on the contrary had some aesthetics. There were some skits and funny elements in between to give us some comical relief as well as to break the monotony. We laughed head over heels to the comical allusions and breathed a sigh of relief for not buying the tickets in the front row, as some performers came down to those sitting there and made them targets of fun and banter.

The Alcazar show is running for more than twenty- five years and is almost the talk of the town for every tourist. It is often compared to Moulin Rouge of Paris or Lido’s Cabaret Show. I am not yet the fortunate person to watch the Moulin rouge or Lido’s Show in Paris, but I strongly feel that every show has its uniqueness of its own so comparing or contrasting these is a mere waste of time. Alcazar show is not at all an adult entertainment show; it can be enjoyed with the entire family. In fact, my little son remained glued to the seat till the end of the show.

While walking back to the hotel after the show, I was speculating about this queer group of “kathoeys” and their genesis. In ancient Hinduism, the mythical story of “Ardhanariswara”- a combination of Purusha and Prakriti, legitimizes the concept of androgynous form and even it is worshiped as a deity. In classical Greek mythology there is a story of a handsome androgyne god Hermaphroditus- offspring of Hermes and Aphrodite. Even in Japanese, there is a concept of “Futanari” acknowledging  hermaphrodites. Since the early days of civilization though there is a mention of this queer gender across various global cultures, however, nowhere in the world except in Thailand this queer sex enjoy such a high-flying attention.

I visited Pattaya past two autumns. My son who was only four at that time, often requests me even now, “Mama, can we again go and watch General Alcazar’s show once more?” I feel the Alcazar people have got their ratings for the show by now.