You are here: Home / Inspirational / One Tablespoon Only 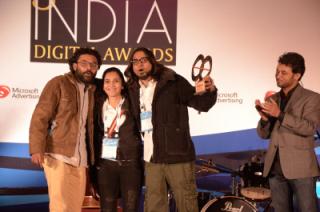 Your Story: Pinank B. Shah receiving Special Jury Mention Award – Best eCommerce Website of the Year for GoosebumpsPickles.com by IAMAI

It was the first week of January, 2013. The winter winds were blowing hard this year as it send the entire country into shivers. It was one of the coldest winter days in decades. Yet living true to its reputation the sun shone bright that sunny afternoon.

It was a breezy afternoon and he sat in his office in front of his newly bought Macbook Pro, which he loved probably more than his newly gifted iPhone5. The chilly air forced him to keep the office windows shut and it was quite cozy in there. He was busy working on one of his designs, which was his forte, when suddenly his mobile phone rang. It was probably the most unexpected call at the least expected time of the day. The call was from New Delhi, the capital of India. An authority from the Internet And Mobile Association of India (IAMAI), which is one of the most prestigious awards in the Digital space, called him up to congratulate him for his website being nominated in “The best e-commerce website of the year” category. He was spellbound, his happiness knew no bounds, he was at a loss of words, he felt goosebumps running all over his body. This was the day he had always waited for.

The first call he made was to his wife, whom he probably loves more than his Macbook Pro. She got as excited as him, she knew what this meant for her husband. They both knew this award would change their lives forever. This award would change the perception of an entire nation which has been deprived of great classy designs for years. This award would change the perception of people towards him. It would earn him more respect, fame among his friends, family and other associates. It would make an entire country proud which has always been considered inferior, in probably all aspects of the modern age, considering its other counterparts from the Western World.

The date of the awards ceremony had arrived. He had to start making preparations for his journey to the land where destiny awaited his turn to make history. He took blessings from his parents and his in laws and departed along with his wife and of course his ever loved Apple products. It was probably the longest flight of his life, literary. The excitement didn’t even let him blink his eyes at a normal blink per minute range, let alone lay back on the soft cushioned seat in the entire journey. The celebrations had already begun as he waited for the moment to walk the e-carpet along with his wife.

The day had come, the awards ceremony had started with a bang. Power packed performances from dancers that had been brought in from various parts of the world. Wine poured in like rivers of fantasy in everyone’s glasses. As the evening progressed, Excitement & Nervousness took over his mind. He felt knots in his stomach as the time of the ultimate award came near. The host announced the runner up name, it wasn’t his. He became even more confident now. He had to be the winner. He knew there could not be anyone else winning the coveted trophy now, except him. Gearing up to go on to the stage to except his moment of honor, he clenched his fist and was about to shout out aloud in a winner’s tone when the winner was announced and his worst ever fears came true. He wasn’t the gold medal award winner. It was someone else, less deserving, he felt. A chill went up his spine, he felt his hands go numb, his mind filled with anger and in a fit of rage he banged on the table he was sitting and tearing away the badge he was given as his identity card he stormed out of the function hall. His wife, sat shocked on the chair without moving an inch. She had no words to calm down her husband, tears dropping from her eyes as sadness gripped her eyes. The feeling of losing, took with it all the excitement of the nominations.

He took out his cigarette, lit it with his lighter and as he took in deep puffs one at a time, he started sensing a feeling of deja vu. A feeling he had lived with ever since he started to understand that he was alive. It was the feeling of Failure. The feeling of being rejected at the hands of destiny even after all the hard work put in. Who would know better than him that Talent without a piece of Luck was nothing but a few grams of ash.

Immensely talented that he was, an ardent follower of Steve Jobs and a hardcore believer in Lord Shiva, all his designs were dedicated and best described the combination of these two magical figures. A terrific painter by natural instincts he could never follow what his heart wanted. Born in a traditional Indian family he was always taught and more so warned that art can’t feed your stomach, and a 9 to 5 job is something which may help you raise a family. Left with no choice but to respect the family values he was taught, he left his art and went to earn bread for his family to a place where he never belonged.

But as the saying goes “everything happens for a reason”, he met the love of his life (who was his boss’s daughter) whom he later went on to marry. But destiny couldn’t hold him there for long though. How can a follower of Steve Jobs live a life without dreams. How could he ever have visualized himself on his death bed with the tag of a non-fighter. As his rebellious side showed up, he left his job and followed his heart — Designing! The moment he started designing he knew he was born for this. He was determined to prove that he wanted to do what he loved rather than forcefully love what he had to do. He grew leaps & bounds, his creativity bringing out the best in him. His folks started admiring him now, realizing their mistake of underestimating the talent that he had, underestimating probably the best designer ever the country had ever produced.

Smoking his last puff, he couldn’t believe that life had come a full circle. He cursed his luck for betraying him once again. He started doubting his talent, moreover his designs, as the whole world knew about the lobbying in this business and the deferred treatment given to small time entrepreneurs. It felt as if the whole world had come crashing down in front of his eyes. Throwing away his cigarette in anger he went inside to pick up his wife and his belongings.

Just as they were about to leave, they heard an announcement. It was from the Jury themselves. The Jury was none other than the man himself who runs India’s number 1 Matrimonial website, Mr. Anupam Mittal – Founder at www.shaadi.com. It was a 2 min speech before the Jury finally came to the point. He said, ” This is the first time since the inception of this award that something like this has been done. As the awards are given on merit alone, no matter what could have happened, but we couldn’t miss out on this remarkable website made by this individual. I request all the people present in this auditorium to go out and visit this website once. You can’t miss this one!! So here I announce the name of the winner of the “Jury Mention Special Award”. It is none other than ‘www.goosebumpspickles.com – One Tablespoon Only !!!!!’

He couldn’t believe what he just heard. Tears started flowing even more profusely from his wife’s eyes, but this time out of happiness. She jumped over him hugging him tightly and planted a kiss on his forehead. They both ran over to the stage to collect the award. This was his moment of truth. The world was at his feet now. Confidence showing on his face, he went up the stage and announced roaringly, “This is Pinank B. Shah, co-founder Digi-Cult (www.digi-cult.in) and this is just the beginning!!!!!” . . .