You are here: Home / Editor's Choice / The Green Bench by the Banyan Tree 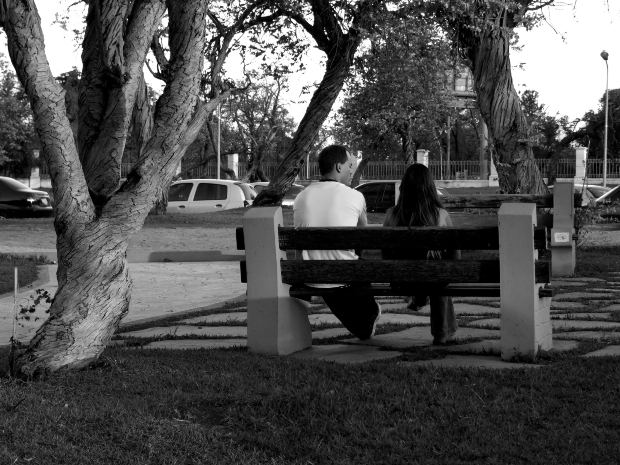 Akshat had begun to enjoy his early morning jogs in the park, but it was only partly because the exercise woke him up from his slumber. The actual reason was something else altogether. He had begun to love sitting on the green park bench by the banyan tree, and then talking with the mysterious stranger who he knew would join him eventually. She called herself Sunaina – a name only half as beautiful as herself. The last two days had been spent in desultory conversation, but these meetings had left him with a warm fuzzy glow inside, as if he had been happy after a long time.

Presently, he watched her walk gracefully to the bench and sit down right next to him. She did not smile at him, she never did. All she did to acknowledge his presence was a curt nod in his direction.
“So hey! Nice weather!”, he remarked.

“Always so sure of yourself, aren’t you?”

“Well, not really sure, but just look at the cloud cover today. I’d say it would be a miracle if it doesn’t rain.”

“But why not?”, he asked. Akshat loved it when it rained – it made him dreamy and reminded him of all the good things in life.

“Rain reminds me of my father. And what a bad girl I was when I was younger.”

“Um, really? Why? What happened that made you hate rains?”

“My father always returned home drunk, and made it a habit to hit my mother for no fault of hers. Then one night, he hit her so much that she fell down, and never got up. That was the worst day of my life. After that it was my duty to cook his meals, and clean the house for him. Although he never hit me, I could not forgive him for what he had done to me and my mother. And on one rainy night, I had gone out to buy some groceries when I saw him with his friends in the inn near the Church. All of them were dead drunk, and were playing some kind of game. A quarrel broke out, which soon turned into a fistfight. Then two men hauled my father out of the inn onto the road. It was just his luck that a truck ran over him then and there. His dying eyes caught mine, as I stood there transfixed in shock. They were pleading me to help him. I had never seen my father look so powerless, so pitiable. I should have gone and helped, but I turned and ran away, never looking back. So you see, I let my father bleed to death on a rainy night.”

Sunaina was in a good mood today. She had finally told the story of her tragic past to someone, and it felt really good, as if a great burden had been lifted off her chest. She knew she had scared Akshat out of his wits, but she didn’t care. He would nevertheless come to sit on the green bench by the banyan tree, because horrified as he was by her words, she knew he was more than mesmerized by her face. And this was a knowledge she intended to use well.

“Hello Chocolate boy! How are you today?”. She had deliberately used the name he hated, to make him laugh. Akshat had once remarked he loved chocolates as a kid, and the name stuck on.

“I am fine, Mystery Girl. How about you?”, he smile as he sat down.

Sunaina was glad he looked so happy, because by the end of today’s conversation, she knew he would be so scared that he would either call the police, or refuse to see her ever again. Or both. But she had prepared for every eventuality, every change in plans.

“As it happens, it didn’t rain last night. So you were wrong!”

“Oh one can never be sure about the weather.”

“Well I know there is one thing that one can absolutely be sure of, and that is love.”

“Love? What do you mean one can be sure of love?”

“What I mean to say is that you can be sure that if someone loves you, he or she would be prepared to go to any lengths to make you happy.”

“Haha. That can happen only to a beautiful girl like you. We guys, we are the ones who have to do the ‘going to any lengths part’. And most of the times, the girls aren’t even happy!”

“But it happened with me too! I had once loved a guy, so madly that I left my college and my friends for him. He seemed to reciprocate my love at first. But it didn’t work out later on. I don’t know whether it was my fault or his, but he was seeing someone else. He was cheating on me, Akshat. And he actually married her one night, when he still used to promise his undying affection for me during the day. So sure was he of my love for him, that he brought that other girl to stay at home with us one night. How could I forgive something like that? I played it cool, cooked them dinner, and put them to bed at night. Neither woke up the next morning. I stabbed them both with my own hands, Akshat. I stabbed them until they could cry no more!”

“Wha-at?”, he said, too shocked to even phrase a sentence properly. “Are you confessing to a cold blooded murder here?”

“Call it murder if you wish. But I call it vengeance. Now will that make you hate me, Chocolate Boy?”

“Then tell me Akshat, how would you react if I told you that the other girl was your sister?”

Akshat felt dizzy from the shock. He had finally found the true story behind the brutal double murder of his sister and her husband so long back. These five years he had left no stone unturned to find the murderer, but the Police were as stumped as the press, and there were absolutely no leads. Finally the case had been closed three years back, but he had always nurtured a hope in his heart that one day he would be able to avenge his sister’s death. And now he was sitting right across the killer, and he was too shocked to do anything. He was finding it hard to believe that the beautiful girl he had thought would become one of his closest friends, was the one who had caused so much hurt to him and his family for so long.

“I- I – I…” he stuttered. His mind was a whirlwind of emotions. A part of him wanted to lunge at her, and destroy her for all the torment she had caused him. But another part of him refused to believe that the frail and powerless girl sitting next to him was capable of such a despicable act. And to his shock, she reached in her duffel bag, brought out a revolver, and handed it to him.

“Here, Mr. Akshat Dave. This is your one and only chance of avenging your sister’s death! Shoot me and get it over with. Shoot me now!”

His hands were shaking badly as he grabbed the revolver with his sweaty fingers. She was smiling at him now. Smiling for the first time he had met her. It was a hard and cruel smile.

“Shoot me Akshat. Shoot me before it’s too late. I give you 10 seconds, and if you don’t shoot me within that time, I swear to god, I WILL shoot you. And by now, you know me well enough to know that I don’t hesitate to take a human life. Your time starts now… 10…9…”

Akshat had broken into a cold sweat. He noticed for the first time that her eyes were a cold and hard brown.
“8… 7…. 6… Shoot me Akshat. You don’t want to die like your sister, do you? Oh, she did scream madly when I hit her. Again and again I plunged the dagger deep into her flesh, again and again she screamed. Until her screams grew fainter. I was covered in her blood when she died, but so overcome was I with hatred, that I continued hitting her until I had no strength left in me Akshat. She was so weak, she didn’t even fight back when she saw me killing her husband in front of her eyes!”

Sunaina was laughing maniacally now. A red hot hatred was boiling inside him.

And he pulled the trigger.

Across the green bench by the banyan tree, the uniformed guard sighed as he looked at Sunaina and Akshat. Ever since they had been admitted to the facility for suffering from Dissociative Identity Disorder three years back, these two had been inseparable. Now Sunaina had been shouting at Akshat to shoot at her with a water gun, and he pressed the trigger out of fear. Water splattered Sunaina’s clothes. Both of them looked surprised at what had just happened, and then their look of confusion was replaced by a blank look, which the guard recognized as that characterizing ‘switching’, or that moment when their personalities changed yet another time. Knowing the process might take minutes, or even hours, the guard got up for his customary round of the park.

He had often wondered how horrid it must be to keep switching personalities so frequently, to not have any memory of what had conspired the previous day, to lose a part of yourself each time you ‘switched’, but seeing Akshat and Sunaina, he always felt slightly better. He thought these two had no knowledge of the bond they had forged, or what had drawn them together in the first place, but they always found each other, and a link between their changing personalities always emerged, no matter what story they believed to be true. The guard had seen them pretending to be tutor and student, doctor and patient, and sometimes even a couple. And they always chose each other to be their partner, among all the other inmates, and this was what struck him as odd. But it always made him marvel at the ways of nature.

His round over, the guard returned to the spot opposite to the green park bench. Akshat still held the water gun, but his hand had gone limp and fallen to his side. Sunaina was sitting next to him, looking placid in her wet clothes. Looking at them, no one could tell that these two were suffering from the most severe of the personality disorders known to man. Yet the guard thought perhaps they were lucky in their own way. For whatever challenge the universe threw at them, he knew they would find each other. They always did.