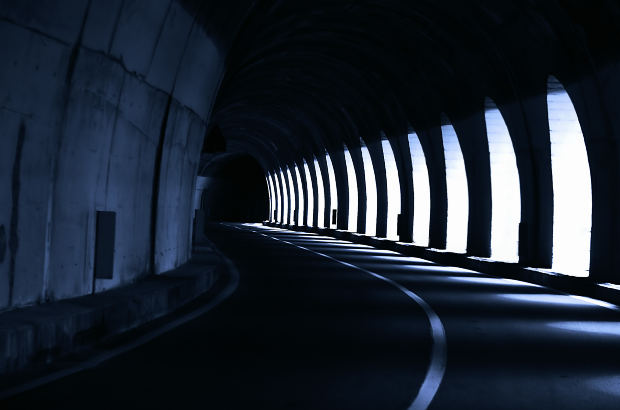 That was the first thought that went through Pratap Kulkarni’s mind as he stood in front of it. The tunnel gaped in front of him like the maw of an ancient monster. The inner walls, once yellow, were now a dark, rusty brown. The ceiling was lined with cobwebs, and the cool night breeze brought its scent to Pratap’s nose. The smell of old rubber tires and the sickly-sweet scent of dead leaves.

The tunnel had been closed down for a year now. It had been a disaster. The lighting had been poor from the start. Half the bulbs that had been installed went defunct in a month.  The rest had flickered dimly, causing a spate of violent accidents. Finally, with the death of a businessman last year, the tunnel had been out of commission.

The route of the cars had been changed, so the cars had to go around the mountain to get into the city. It took 40 minutes. The tunnel would have taken 5. But nobody objected to the tunnel being closed off. Everyone agreed that the thing was plain spooky.

Pratap gazed at the mouth of the tunnel. His legs were shivering, but not from the cold. He had heard enough ghost stories about this tunnel to last him a lifetime. Rumours about the ghosts of the accident victims ran wild and he wasn’t very anxious to see if they were true. But he had no choice.

He sighed and looked at the parcel in his hand. A toy car, gift wrapped in yellow paper for his son. It was Christmas Eve. His wife would be staying up to see him. They always prayed at midnight on Christmas. It was more of a necessity than a tradition. He looked at his watch. 11.30pm. He had to get home soon. The normal way into the city took an hour to go by. The tunnel would be much faster. He could get home before Christmas.

The solitary lamppost next to him flickered, the dancing beams casting frightening shadows at the foot of the tunnel, not helping the gnawing fear in his chest. He glanced at the post, noticing a piece of paper stuck at the bottom, like a pamphlet of some sort. It looked new.

He took a deep breath. “There are no such things as ghosts,” He said to himself. The tunnel seemed to be laughing at him, the shadows beckoning him forward. He took his phone out of his pocket to call his wife, and cursed softly.

The display was shattered. He had forgotten that he’d broken it earlier in the day. It had fallen to the floor from the second floor office window, all smashed up. He threw the pieces into the bushes nearby and looked at the tunnel again; his face contorted in a grimace, and started to walk.

He stood a couple of feet from the tunnel now, and peered inside. It was completely dark. Not a single source of light was visible anywhere. He couldn’t even see the lights at the other end. His heart beat quickened. “Stupid,” He told himself, setting foot inside the tunnel. He wasn’t claustrophobic. There was nothing to be scared of.

That was precisely when an old story about the tunnel came to his mind. This was the one that had given him nightmares for weeks. He heard it from the people who worked with him. A year ago, on Christmas Eve, a pizza delivery boy had tried to walk through the tunnel, but he was killed in an accident. A truck had run over him, crushing every bone in his body, and decapitating him. They said the head was never found, and the ghost of the pizza boy was the one most people had reported seeing, searching for its missing head.

“Old wives tales,” He thought. He had to get home. Tonight was special. Very special. He stepped inside the tunnel.

He walked slowly, his feet echoing with every step. His eyes darted left and right, trying to get accustomed to the darkness. A single line of sweat was running down his back, tracing a perfect line down his spine. His breathing was getting shallow and ragged by the second, his heart still thumping in his chest.

The darkness of the tunnel seemed to press down on his face. He seemed to be suffocating under the absence of light, his breath coming out in wheezes. He turned around, looking for the way he had come, but there was no light there as well. He seemed to have been trapped in a vortex of darkness.

His hands were trembling as he patted his pockets for his cell phone. Too late, he remembered how he had thrown the pieces away. It was broken anyway, there was no way he could have used it. He blinked furiously, trying to get rid of the sweat creeping down his forehead and into his eyes. His ears strained for some noise- the chirping of insects or the rumble of cars from the outside- but he could hear none, save for his own heart, which was sprinting in his chest, the sound as though magnified ten times.

He was close to tears now, the numerous accounts of ghost stories coming back to him, as he imagined one ghostly form to another, passing before his eyes, his feet staggering wildly, trying to find the exit. There seemed to be no way out. He moved slowly, his hand desperately searching for some kind of hold on the tunnel wall, but only finding empty air.

Then suddenly, he heard a noise. He stopped, his senses sharper. His ears strained to recognise what the sound was. Tap-Tap-Tap-Tap. Someone was coming!

He went perfectly rigid, not moving a muscle. He wasn’t even breathing, his heart rate now doubled. His nose took in the musty scent of the tunnel, now with a small scent of something else. Something like… was that pizza?

His eyes went wide. He was the faintest outline of a man, coming towards him. Only a rippling shape, just about decipherable in the inky darkness. The man was shorter than Pratap, approaching slowly. Pratap looked at him fearfully, as the man’s hand went to his pocket, and took something out.

A faint light appeared in the man’s hand. It was a cell phone, and the time showed 11.50 pm. The man was dressed in a red shirt and blue jeans, holding a pizza delivery bag. The hands were wheatish in complexion, with short fingers.

“Just a pizza delivery boy. Probably making a late night delivery,” Thought Pratap, relief filling his heart. That was when he looked up to the Pizza boy’s face.

He had no head.

Where there should have been a head, there was nothing. A portion of empty, black space, under which the neck and body hovered, lit by the faint blue light of the cellphone.

Pratap stiffened. His whole body shook as he backed away, a finger pointed at the ghost. He was trembling violently, trying to scream. But no sound came out. It was as if the sight had frozen his vocal cords, rendering him unable to speak. The headless man stood calmly, phone in one hand. And he reached out with the other, going for Pratap’s face.

Pratap ran. He turned the other way and ran for his life. The headless man watched him run until he became part of the shadows of the cave, and was not visible anymore.

The headless man stood there for another moment, trying to hear the footsteps of the man who had just ran. He heard nothing. And then he started to laugh. He laughed hard, doubling over and clutching his stomach. He straightened up and took off the pitch-black towel which was covering his face and wrapped it around his neck like a scarf.

“Wish the guys from work had seen that!” he thought to himself.

He walked slowly, holding the mobile phone in front of him, grinning to himself. He had planned to dress up like the headless pizza boy and scare someone for ages. He had finally tried it out today, and the result had been fantastic! He chuckled again, as he came out of the tunnel, breathing in the cool night air.

He stretched his arms, and ran his fingers through his air, thinking about the dude who had run away.

“Nice,” He thought. “Maybe I’ll do this some other time,” He looked at his surroundings, and saw the old lamppost, the old bulb inside it flickering away. It was time for him to go home. He walked a couple of paces and looked down, cursing. His shoe had come undone.

He looked around and went across to the lamppost and put his foot on it, tying the laces. His eyes wandered over the rusty post, and fell upon a piece of paper stuck to the bottom. It looked new. He bent down and read it. The text was small, but not hard to make out. It was like an obituary, the kind you see in newspapers. It said:

“First death anniversary. Died inside the tunnel on Christmas Eve last year, hit by a car. Mourned by his wife and son. You will live on in our hearts.”

It sounded cheesy, like the people who had printed it hadn’t wanted to spend a lot of money on it. He glanced at the name under the black and white photograph of the dead guy which was under the text.

The picture of the man seemed vaguely familiar. Like someone you once knew but now forgotten. He gazed at the picture intently, hoping for some flash of recognition. None came.

He sighed and got up again, dusting his knees.

“Ghosts,” he said to himself and smiled. Ghosts didn’t exist.

He started to walk slowly, away from the tunnel, towards home, the solitary lamppost winking behind him; like they shared some dark secret.