You are here: Home / Editor's Choice / Redemption Cemetery: Curse of the Diamond 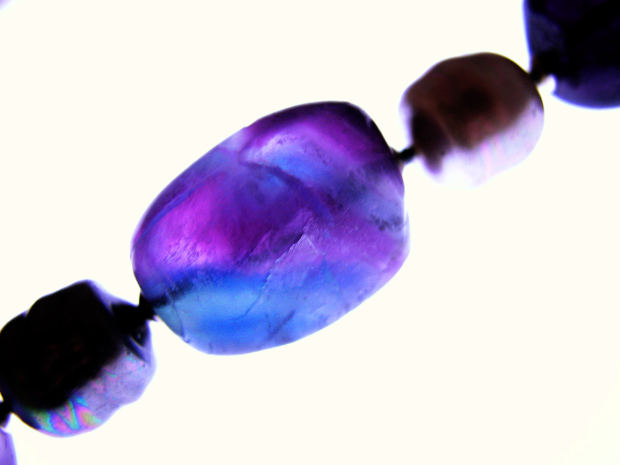 A bead of perspiration rolled down John’s face. The hot midsummer night was unusually humid. He wiped the sweat off with the back of his hand, smearing his face with dirt in the process.  “Damn!” he muttered in exasperation. This was turning out to be harder than he had imagined.

He summoned all his energy and swung the pickaxe one more time. A dull metallic like sound echoed as the pickaxe made contact. John stilled himself for a minute, fear gripped his heart. He looked around himself warily. It was dark all around and not a soul seemed in sight. The fifteen hundred odd tombstones stared back at him mutedly. The moon played hide and seek with the clouds, throwing random shadows on earth in the process, adding to the eeriness of the place. The steadily deteriorating edifice of the village chapel loomed in the distance. It was supposed to have been built in the 19th century by the duke of the region, but when the French revolutionaries had invaded the village, they had vandalized the place. Yet surprisingly, it had managed to survive the ravages and although it was in a pitiable state, even two centuries later, it stood like an epitaph, a reminder of the atrocities that had befallen the peaceful village.

John resumed his work. There was not much time at hand and he feared lest someone should happen to cross that way, he would be spotted and the prospect of being questioned or worse still of getting arrested was not a very appealing one.  He brought the axe down with greater gusto. He was almost there; his long cherished dream was now just one foot under.

Ten minutes later, John surveyed the scene of his work. He could now see the wood casket, and he could decipher the fleur-di-lys that was carved into the top. He brushed the layer of dirt hurriedly with his hands. The casket appeared fragile and John was surprised that it had managed from disintegrating completely. If the tales were to be believed, it had to be at least two hundred years old. How was it possible that the wood had survived even though it had been buried six feet under?

But this wasn’t the time for retrospection. He needed to break into the casket immediately. As per the legend, the casket contained precious jewelry that belonged to a French monarch’s daughter. But the most intriguing part of the legend was that there was a necklace that had a diamond which was rumored to be bigger than even the Kohinoor.  John rubbed his hands with anxious gaiety.  Like the Kohinoor it was believed that this diamond was cursed as well and brought great misfortunes to the person who possessed it. But John was not falling prey to old wives tales. He had dismissed this curse theory the very moment he had heard about this diamond a year back.

“I win”, Scott said as he brought down the pitcher with a huge bang on the table.

John finished his beer a minute later and grinned sheepishly at Scott.

“Ya, old man, you win” John said, his speech was slurred from all the drinking that they had been doing throughout the day.

He had met Scott after almost two years, had put him down as dead when he heard nothing from him in the months gone by. And then today morning, an incessant banging on his door woke John up. Grudgingly he opened the door only to stare into the old Frenchman’s sharp blue eyes. He let out a loud yelp of joy, and they hugged and thumped each other vigorously, shouting and cheering vociferously, much to the annoyance of John’s landlady.

“Where’ve you been?” John asked as he dug into a Spanish omelet an hour later. They were seated in an old café on the corner of the street.

“Don’t ask, for you not gonna believe it!” Scott replied with a sly and mysterious smirk on his face.

“With you, I’ll believe anything” retorted John.

Scott took a big swig of beer, and looked piercingly into John’s eyes.

“Was out on the sea with them goddamn pirates” Scott paused for effect.  “We looted ships in the route Saint Muar to Jurong Port, sold off the goods at cities along the way” He grinned. “It was a hell lot of fun. High adrenaline, manly stuff”

John merely grunted. The sea life had never excited him. He found the land more enticing and less risky.

“It was there that I heard an old French tale.” Scott resumed. “In the 19th century, a remote village in the south of France was burnt down by the revolutionaries. At that time, the duke was staying in the village along with his wife and daughter who was merely sixteen years of age.  The wife and daughter were very scared, and the duke feared that the revolutionaries may exploit the young beauty that her daughter had blossomed into. So before the revolutionaries could reach her, he shot her with his gun and buried her in the graveyard behind an old chapel. Along with her body, he buried her favorite jewelry. It is believed that it’s quite a lot and that there is a huge diamond stored as well”

A silence followed.  “So what are you saying?” John asked.  Scott gave a wry smile. “I sure would like to get my hands on that diamond, but it’s a long shot and the details are vague. The name of the village is not sure; there are hundreds of villages in south France. It will take decades to find the right one.  Plus there is the matter of the curse“

That was a year ago, and in the twelve months that had passed, John had researched and scavenged and spent all his savings in finding the elusive diamond. He scanned villages after villages, questioned the habitants till they became suspicious and then moved on to the next one on the route. Of course he didn’t let Scott know about his activities. He couldn’t even if he wished to, for the man had disappeared once again.

John tried to pry the casket open, but even though he applied all the force, it wouldn’t give way. “This is strong stuff” he muttered under his breath.

“Or maybe the curse protects it” a hollow voice sounded from above.

John jumped out of his skin, letting out a scream in the process. He bit on his lips to stop himself and noticed that he was trembling like a leaf. He couldn’t see the ground above him for he was six feet under.

“Who’s there?” he whispered. His voice sounded strange even to his ears. He heard the shuffling of feet and deep grunting as someone made his way closer. A pair of feet swung from the opening of the hole that he had dug.  Feet that were covered in frayed beige leather boots that had an anchor embroidered on the ankles.  He recognized who the person was without even needing to see the face of the owner of the boots.

“SCOTT!” he shouted. “What on god’s name are you doing here?” John was unsure if he should be glad or saddened by this discovery. The thought that he may have to part with his loot flashed through his mind.

Scott jumped into the hole and stood beside John. He looked cadaverous, and his eyes had an inhuman gleam in them. Probably the last excursion had been a tough one, thought John.

“So you found the jewel?” Scott questioned the obvious. John thought he detected a hint of regret in his voice.

“Yes. I did it. And that is why it belongs to me. Only me” John’s voice came out in a high pitch.  Scott continued to smile, a tired sad smile.

“It’s not yours. It belongs to the French duke’s daughter”

“Bah. You are out of your mind. She’s dead two hundred years. It’s no good to her. But for me, it means no longer would I need to suffer the drudgery of the common life” John laughed greedily.

He unhooked the rope that he had tied around his waist and wrapped the rope around the handles of the casket. The other end he threw outside the hole.

“Wait” Scott said quietly, but John ignored him. He had less than an hour from dawn and he had to move fast. He climbed out of the hole, grabbed the end of the rope and started heaving the casket up.

“Wait” Scott’s voice came from behind him. John started. He hadn’t seen him climb up from the hole. He felt panic clutch his heart and his blood froze as he stared into Scott’s face. Something was definitely amiss.

“Follow me” Scott said curtly, motioning him with his fingers. John obliged, as if he had been hypnotized.  Scott meandered through the rows of graves and suddenly he stopped. Without a word, he pointed at the flagstone in front of them. John read the letters on the flagstone. “Scott Augustine. 1956 – 2010.”

“What does this mean?” John asked incredulously. “Going by this it means you are already dead!” his voice sounded hollow to his own ears and he gulped nervously as he looked at Scott. His eyes widened as he looked beyond at an open grave. The last thing that John read before losing senses was the writing on the flagstone.