You are here: Home / Poetry / The Life Of A Rose 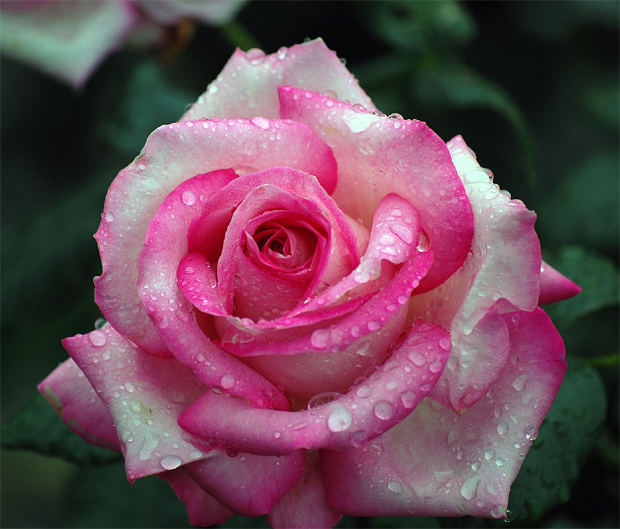 Poem – The Life Of A Rose
Photo credit: alive from morguefile.com

And here i lie,for i had finally found

All dried up and wilted petals,

Old and uglier than the rust on those metals,

Not particularly a favorable choice

For a poem or a prose,

Not quite what he used called me,a rose.

Talking about him,the one they called the gardener.

But for me my creator,my friend,

or in his word’s his ‘partner’

I remember the day i was born,

When the bonds on the bud were broken.

My eyes saw his smiling face,

As if it were my new life’s welcome token.

As he stroked me with his wrinkly hand,

He said,”partner you’re going to be the pride of every garland.

How happy i was, when the glowing ball

In the infinite sky, was about to end it’s stroll

As i watched his him, bent over by age

Attend the jasmines,the tulips and the sage.

At the end, it was my turn,

Though his weakness and tiredness made my stomach churn.

He smiled upon me, holding the bucket for a sprinkle.

And how i liked his eyes when he looked at me,

Filled with pride and with a childish twinkle.

Once i saw someone, he looked at with the same proud eyes.

No falseness, no lies.

I had never thought of finding another,

But now i felt nothing but love for my brother.

But love soon changed to fear of life,

As i saw him approach me with a knife.

I felt him giving a small cut on my stem,

And i was in his hands, feeling like a stolen gem.

I saw him taking me away from everything i ever had,

And unable bear the thought of my partner being sad.

And then i realized this not the fear of losing the old,

But gaining the new, not knowing if it was coal or gold.

And then the awe of the world outside his garden hit me,

Something new everywhere i could see.

And then i saw her,

The most beautiful thing i had seen, ever.

He walked up to her, and gave me to her,

And said ‘i would never leave you, never’.

She caressed me with her soft and kind fingers,

Overpowering me with her perfume, which still lingers.

They stared at each other,

binding in the greatest strings nature ever wove.

And i had my first taste of love.

She gave me to him, and said ‘keep him fresh and new,

Feeling at the top of the world i returned to mine,

Blinded by my lives gloss and shine.

So blinded was i, that i forgot edges,

Which i realized as i returned to my home across the hedges.

Lying there was my partner,kissing the soil,

For which he had to work and toil.

Broken i fell to the ground,

And the mysteries of life had me bound.

As just when i had thought i had a start,

I had my small world falling apart.

In wooden case, was when i last saw him,

I thought if it were a dream, a crazy whim.

But it was true, my partner was gone,

Was i going to be alone?

But my brother took me along,

His face full of sorrow like a sad song.

They said death was a killer,

But there it was,

what was still left of him, a stone pillar.

He placed me at his feet,

And i stayed there through rain and sleet.

And here i lie,for i have found,

The soil in which we’ll meet again,

Where there will be no sorrow, no pain.

Where we will be the same,

Having no existence, no name.

Just my love for my partner,

The one they called the gardener.