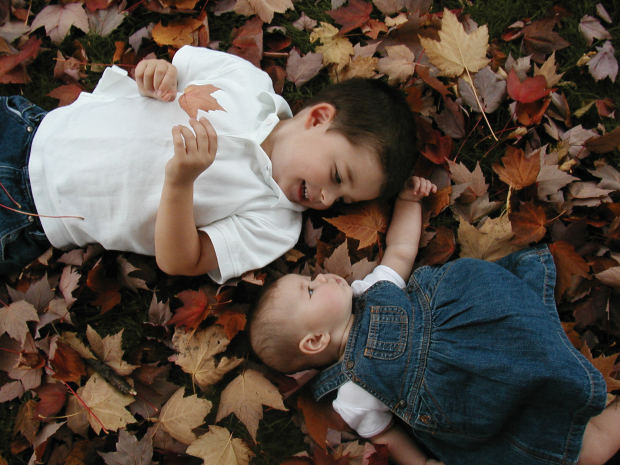 In the midst of the crowd of various hypocritical people wishing goodwill at ones face and then later stabbing them at their back stood a lone gentleman nearly in his thirties waiting for his metro at a metro station. The station was swarming with the noise of people chatting about their days plan, a group of ladies discussing about a young man who has been dating his boss, noise of the sweeper sweeping the litter sprayed by these educated people and pouring them over into the trash bin, the sound of the metro halting passionately at its platform, the door separated and these people stuffed inside.

The station filled with people of different kinds, one had a briefcase in his hand and was yet to reach his office but still busy with his client over the phone, another waiting anxiously for the metro to reach his destination depicted his impatience by constantly tapping his feet, a young boy lost in his own world of music with earplugs stuffed inside his ears, an elder woman desperately searching her purse for something, maybe her cell phone, makeup tool, money for ticket or even the metro ticket itself.

Amid such a heap of people, workers and officials, the gentleman’s eyes were stuck on a little boy barely able to cover his body with his inadequate clothing, a torn blue shirt and a muddy undergarment. He, the boy, went from one people to another with a hope for alms or even a single penny. Some provided him with pennies, other denied him politely, some rebuked him with anger, but the boy never lost his hope. He kept up his hope unless the people lost their patience. In spite of being denied by most of the people the boy kept on moving from one person to another.

The gentleman kept on staring at the little boy with full attention until the boy reached him. The boy stood still before the gentleman with his arms spread towards the latter, silent and resilient. He kept on looking at the gentleman’s eyes with an unusual sense of hope. His face was torn and withered, his hairs could be presumed to be dead, his ragged and shabby clothes portrayed his condition, and his feet were covered with mud. The gentleman kept on looking at him with a polite smile while he reached for his wallet and placed a currency on his hand.

The boy was overjoyed and a huge curve carved on his face. He ran away from the gentleman, thrilled, and did not approach anyone else at that station. The gentleman watched him as the boy made his way out of the platform, walked down the stairs and followed his destination across the road. The gentleman had a strange feeling about the boy. He could have asked for more as others did but he did not, on the contrary he didn’t even approach any other individual as if the purpose of his soliciting was met.

A weird desire aroused in his heart to unfurl the purpose for which the boy was so desperate. It was already half past twelve in the afternoon and the sun was glowing over the people’s crown which even denied them their shadows. Ten minutes still remained for his metro to arrive when he got a beep on his cellphone. It was his sister, Jiah.

“Are you going to be late for your dinner?”

“Maybe”, he replied and hung up the phone. His conversation with Jiah lasted for a few seconds at most, few minutes if they had some argument. As he hung up the phone he saw something flashing, a snoozed reminder. It said, “Jiah’s Birthday” It was no surprise for him for it was not the first time he forgot her birthday. He simply pressed the cancel button and replaced the cellphone in his pocket. He could hardly remember when was the last time he faced her to give her his wishes. It was too hard for him to remember when was the last time they had their lunch together, or the breakfast, or the dinner. But Jiah never hesitated in asking whether he would be home for his supper. His birthday wishes mostly constituted of a text message which had almost the same pattern… Happy b’day, P.S.   Busy in some urgent work. Won’t be able to attend the celebration, My apologies.

The clock ticked twelve past forty when the metro arrived. The doors separated with a subtle sound which was hard to detect amongst the noise of the crowd. The man was still talking to his client over the phone when he stepped inside, the impatient man bolted inside as soon as the metro arrived. The gentleman hardly took a step to enter the locomotive when something caught his attention. At a market place not too far away from the station a crowd had gathered and judging from the pace of the crowd he could sense violence. It was hard to determine what exactly was happening there but the gentleman could see a boy being thrashed by an older man – A boy in a torn blue shirt.

The gentleman recognized him. He galvanized in action for the boy and ran with the highest speed that he was capable of. He rescued him from the wrath of the older man as soon as he reached the spot. The man had knocked him hard and a thin line of blood dispersed from the boy’s nose. The boy endured a skinned knee and the sleeve of his shirt was torn off.

“Leave him to me, I’ll teach this little fellow a lesson today”, said the older man.

“What has he done?” inquired the gentleman while he wiped the blood from the boy’s face and covered him with his coat.

“These little wayward fellows come to my shop and run away with some or the other thing”, explained the older man in his anguish “but not today, today I’ll teach him a good lesson”.

“Hey…hey relax”, the gentleman pampered the boy and insured him that he was safe and then turned to the older man “Did you ask for the money?”

“Oh what difference does that make, I know these cunning fellows, they…” the older man was interrupted, before his very eyes stood the little boy with his hand held towards him and a currency note stuck between his fingers. He was dumbstruck, ashamed while he took the money. The gentleman scorned him and the older man did what was favorable for him – apologized and left. The little boy stood up when the older man left and took out a loaf of bread which he had adhered inside his shirt while he was being beaten.

The gentleman was puzzled. An obvious question circulated throughout his mind… It was just a piece of bread. Why was it dearer to him than his life? He intended to ask the boy but then retained himself from doing so as it was none of his business. He reached the boy and sat before him.  “Are you alright, my dear?” he asked.

“You are the same person who offered me the currency. Aren’t you sir?” asked the boy with his juvenile voice.

“Yes indeed, little boy” smiled the gentleman while he placed his hand over his head. The boy took hold of his hand, grasped his index finger and pulled him pointing towards somewhere.

“Where are you taking me?” asked the gentleman, confused. The boy didn’t pay any heed to what the gentleman had to say, he just pulled his finger towards him and kept walking towards a destination unknown to the gentleman. “Hey boy, I would really appreciate if you mind telling me where we are headed because I am afraid that I am a bit busy for any silly game right now”

The boy said nothing. He just kept on walking mechanically barely paying any attention to what fell into his ears. His pace kept on amplifying as he reached closer to his destination. They crossed the road and headed towards a saloon. A thin miry alley stretched behind the saloon which was flooded with dirty puddle and mud as a result of yesterday night rain. The boy steeped right into the puddle without giving a second thought. The gentleman struggled hard to save his footwear in spite of which the mud got stuck into his shoe.

They emerged from the alley and reached an under construction building which seemed to be unattended for a long while. The gentleman saw a little girl lying on the floor who covered her body with torn attire, wrapped in a sheet, sleeping peacefully. The boy loosened his hand and turned towards the gentleman. “Who is she?” asked the gentleman while he looked puzzled.

“She is my sister, Sir”, said the little boy as he ran towards her and shook her from her sleep. She woke with a start and gave him a livid look. She said something which was inaudible to the gentleman from the distance. They talked for a moment when the little boy pointed towards the gentleman and said something which carved a smile on the girls face. The girl came to her feet and walked towards the gentleman with a descent smile on her face. The gentleman was still clueless about what was happening until the girl cleared his doubts.

“My brother told me how you saved his life from a mad shopkeeper. I’ve nothing to offer you sir except my gratitude. He is so foolish. Always ends up falling into trouble just for me. You see, it’s my birthday. He took so much trouble just to bring me a piece of bread as my birthday gift.”

The gentleman was astounded. His heart weighed heavy. He was overwhelmed to confront such love that existed between these two little beings. Such love which he never had for his sister. He flicked the drop of tear which emerged from the corner of his eyes and sat before the girl.

The girl thanked him and then retreated towards her brother to give him a warm hug. The gentleman walked towards the alley lost in his thoughts. He was not aware while his feet immersed in the puddle and his shoe glued with the mud or maybe he didn’t care. Two little beings enlightened him, made him conscious of what he lacked in his life – Love. He realized that he was so lost in the corporate world that he was cut off from the warmth of love and relations. But, he was awake now, stirred from the illusion of the modern world. He went to a florist shop, bought a bouquet consisting of a pile of roses, dahlias and some orchids and a card which read “Happy birthday, Sis.