You are here: Home / Family / PARENTS:Take Care of them,Rest will be taken care by GOD 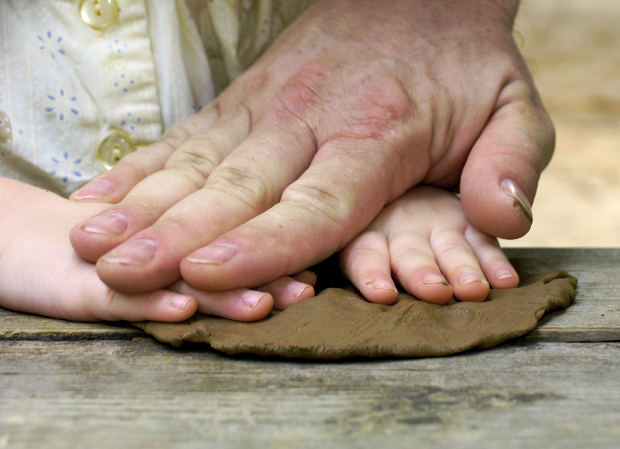 PARENTS:Take Care of them,Rest will be taken care by GOD
Photo credit: anitapeppers from morguefile.com

A voice full of calmness echoed from the other side
“Hello,Can i speak to Mr.Samar ??”
“Yes” he replied
“Hi Samar its Avinash here.I would like to know about the health insurance scheme you have chosen”
“The last thing i dont want after a hectic schedule at office is to talk to some health insurance agent.Sorry i do not have time.”He interrupted and lashed out at the person on the other side of the call.

He put his cellphone on the table and later activated DNDs(Do not disturb service) on his number so that incidents like this do not repeat in future.After spending almost 12 hours in office and travelling from office to home in heavy traffic he always try to manage time to spend with his family.This stupid calls from mobile companies,health insurance agents,real state agents used to ignite the demon in him and all the anger that he was suppressing in his heart against his TL(Team lead) and project manager, he would vent all on those unlucky yet chained agents.Sometimes he enjoyed shouting at them.

Samar had joined the company almost a year ago.Once Vinay told him about something that he ignored then.Now when he remembered his words,the name of the person who was on the other side of the call resembled with the name Vinay told him about.Vinay told him that almost all of their batchmates got a call from this person who would address himself as some Avinash and would enquire about the health insurance plan the employee has chosen.
In this IT industry every MNC offers some health insurance schemes that cover the employees and their parents.To get the benefeit in any medical emergency,the employees need to pay a premium amount annually which is deducted from their salary.Samar always thought this things to be a secondary one and at times even unimportant.The next day when he went office, he was humilated by his project manager in front of the entire batch.The crime he committed was that he only asked his project manager about his poor appraisal rating as he had worked hard than many throughout the year.

Notwithstading the humilation,Samar was fuming from inside.When he reached home he skipped his dinner and went straight to his bedroom.He was cursing his PM badly.Suddenly his cell vibrated again.As he picked up, the same voice echoed from the other side
“Hello Samar,its Avinash here.
I will not take more than two minutes time of your busy schedule.I just want to know the health insurance plan you have chosen.Now a days its important to choose a balance insurance plan.I can help you in choosing one”
“Listen Mr. Avinash,I dont know you but if you have not chosen any insurance scheme for you yet then please choose one because if you disturb me again then surely i would beat you till death and then you would be in serious need of your insurance scheme”he interrupted him and vented out everything that he was holding back since morning in that one line.

Few days passed and one day while he was busy in his work he recieved a call.It was Pihu on the other side.
“Papa rush quicky,Dadu is not well”
“Do not worry beta.Tell mamma.She will take care of your dadu”
“Papa she cant.Doctors are saying that he has been put on ventilation and nothing can be predicted within next 24 hours”the phone slipped from my hands.
The news was unexpected as Samar’s father was a healthy man and has always been conscious about his diet which many ignores at the age of 77.A fear gripped his and he was like a small kid praying continuosly to God for the well being of his father.Its when we are in complete mess and totally screwed up in life that we remember the all mighty and he was too not an exception.He suddenly calculated in his mind about the available cash at that moment to him and it turned out to be approximately 1 lakh 17 thousand rupees.Rest that he has saved till then for emergency situation like this was in his bank account.But adding to his cursed fate he somehow forgot that it was a ALL INDIA BANDH going that day and even banking sector was participating in that strike so the option of withdrawing cash from bank ceased.So he kicked off his bike taking the cash from home on the way and headed to B.C. Birla Heart Research Institute.

He reached hospital where he enquired about his father to the receptionist.And the first thing before letting him know how his father was doing they told him to deposit 2 lakh rupees and to consult with Dr. Shweta Bhagve.He hugged Pihu who was continuously sobbing and Navya was standing a few meteres away.She stared at him and gave him “Everything will be fine ” type expression.Samar wondered how during the most difficult situation women can withstand the pressure and yet can be so calm at the same time which men lack certainly.He thanked Navya for being there.Suddenly he saw a doctor coming out from ICU.When he asked her about his father she told that he had a massive heart attack leading to blockage of arteries.The last option available to them was to go for Bypass surgery.She told him to deposit 2 lacs immediately and to sign a bond.He requested her to go for the operation and assured her that the rest 80 thousand ruppees would be deposited the following day.But she did not listen and also warned him that delaying the operation would be fatal for his father.He scratched his head and almost reached out to every possible contacts that he could but still he was getting short of 30 thousand bucks.

As tears started rolling down Navya came to him and offered her earrings and chain and told to offer them to the accounts department so that they can take them back once the bills are cleared.As Samar approached the accounts department they denied him and he was left helpless again but was astonished to hear that someone already paid the remaining amount.When he enquired about that living God who did such good to him, they said that he left a note for him.But he ignored the note and kept it in his pocket and ran to ICU room no 21.The red light was switched on which took away a burden from his shoulder.He thought if only he had planned some insurance plan for his parents without keeping money in some bank account,he could have avoided this mess.

And a message tone beeped.
It was from Vinay”Hey buddy i could only arrange 10k and on my way.Will be there wihtin 15 minutes.By the way our PM got transfered to onsite and we have a new one as Avinash.And we found out that he was the same guy who used to enquire about insurance scheme”
As he read the last sentence he hurriedly took the note from his pocket and read it

Hello Samar,
Before i introduce myself to you i want to tell you something.Around 5 years ago i was facing the same situation that you are in right now.I was earning a decent salary and never bothered to plan my savings and used to keep a hefty amount from my salalry in banks offering 14% interest rates on fixed deposits.But when i needed the money most,i ran out of cash and my ill fate took away my mother.I lost her.Despite working in a MNC i could not arrange the cash and it was only because of my foolishness as i lacked in looking at the bigger picture of life.The only difference back then was that no one helped me with the remainng cash.So from then i made a promise to me and to my dead mother that whoever comes into our organization,i would request each of them to opt a balance insurance plan.I never told my identity to anyone as it was easy that way and i was also serving onsite.So it helped me keeping my identity safe.

But today when i was posted offshore and took the responsibility of your team as project manager i was infromed about your situation.So i paid the reamaining amount.I am not any God Samar.I only did this because i was looking for last 5 years to reduce the sin that i had committed.Everyone is not lucky Samar.But atleast we can plan our earning so that our parents who spent their everything to give us a better life can get the benefeit when it is needed.And that is the reason that i called you twice.I dont know if you would still want to kill me or not but one thing i can tell you that in life we often get so much self centered that we forget about them without whom we would not have reached where we are today.So we need jolts to come back and to face the reality.I was not lucky that day but i know that my mother is blessing me for my deed and today when i will sing bedtime prayers i would feel a little less chained of my sin.
And if you want to repay me then join my movement and encourage each one of your colleagues to plan their earning and make them aware of this emergency situations.Who knows how many Samar and Avinash are still living their life without looking at the bigger picture of life.
Take care of your family.They are the ones who will stand beside you even when your conscience fails to stand by you.
Looking forward to work with you.

Tears were rolling down his cheeks.He scolded himself for hurting Avinash with harsh words without even letting him complete his part during that phonecall.Still he helped him when he needed most.Avinash was not less than any living God to him.He thanked him silently from the bottom of his heart.
He thought whether he deserved enough to have parents who would still forgive him for his mistakes,to get a girl like Navya who accepted his family like her own, to have a little angel Pihu in his life,to have colleagues who tried to help him out however small or big the problem was,to get a helping hand from Avinash who was no less than a living God to him.

Suddenly someone patted him on his shoulders
“Samar the operation is successful but we have to keep your father under strict observation till next 48 hours”Dr Shweta said.

Samar thought that he was saved from committing a sin.He smiled and cried both at the same time.May be he needed this jolt.He hugged Pihu and Navya and prayed God for mercy.

He saw something scribbled on a board on the wall beside the doors of ICU.He read-
“LOOK AT THE BIGGER PICTURE OF LIFE BEFORE YOU ENTER ”
__END__