You are here: Home / Family / The Ascension 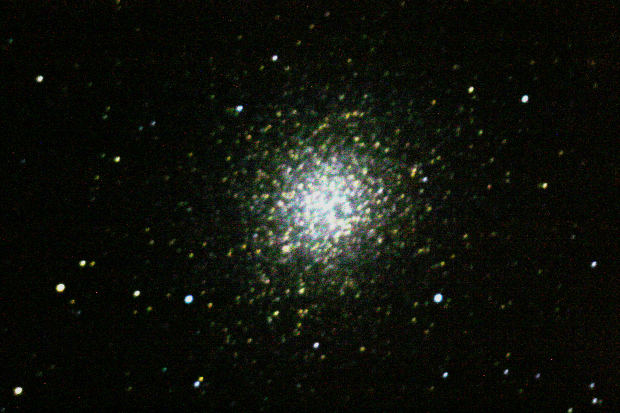 Unable to turn around, all that Philip could see was the vast dead space with the brightest stars there ever were. No sight of any help. Or hope. He knew there was none. He had realized the ocean he was lost in was bottomless and downside-up.

Only if he could turn his back around he wished. He didn’t care for the emptiness. What he longed for was behind him- his home. The majestic ball of mystery and awe. The ball that was open as a field, yet enclosed within her all that he loved, all his memories, all that he cherished and all that cherished him. All the love and life in the universe.

He understood that regrets and stars will kiss him goodbye. His loneliness and pain would sing eulogies, his only true friends, unwitnessed by the grande. There was so much he could do, so much he would. If he could return, he knew he won’t. He knew his metal casket that supplied him life, eventually would stop and devour him.

His breaths grew paler, his memories, stronger; as he slipped ever so gently into the sleep. He remembered how his father would take him to his long gone mother’s grave. On their way back he would drive off the highway, to the little road to Salkanpur temple. They would walk then to the lake. Sometimes talking about his school, sometimes not talking at all; silently remembering the same woman. They would perhaps search for answers on the reflecting lake, which reflected only the night blue stars.

He remembered; a few years later, as his father drove him to the airport; to see him off. On the way, as he watched the green and trees under the evening sky, he knew well his father could cry. After a long journey of silence and voiceless chatter, just a few miles short from the port of flies, with a gloomy heart, young Philip turned his gaze outwards. As he watched the dark that was once green. He realized as he watched the same old eternal night sky; he was the same man, the same boy.

His boss from NASA greeted him as he returned from his fourth trip to his homeland. Philips never saw Santa, but he knew that he gave gifts. Philip that day could clearly see the Santa in his eyes. They had lunch in a fancy coffee shop and just as they were lost in the mesmerising tales of the beautifully disgusting India, he heard something that shook the ground underneath. He was shocked at first and then weep. He could not stop crying, he never cried. He was too young when his mother died, too responsible when he left his father, too lost when he married his love, and when he greeted his daughter into the world, too happy. But he cried that day on the lunch like a baby, tears rivered down his sleeves as he buried his head in his arms. Santa had given him the only present he could ask for.

His wife cried too when she fought him to stay. Their daughter was only a year and a little old. She barely knew who Philip was, her mother feared the same that night. He had broken her heart. He had made the choice. He spoke to his father on the phone, who also tried to make him listen.

He said to himself, as he sat outside his house and his family. The night was bright as it deserved to be,

“To see once, what she sees from up there.”

As the air in his armor extinguished, his mouth and nose began sucking nothing, waking him up from his past to his reality, in a fashion realistic.

As his body began to jolt and his mind became restless, scared, he noticed what was before him. His back was towards the emptiness he despised, he was spinning, just too slow to tell. The bright Sun was almost around the corner. What began before him was the orchestra of everything.

He tried hard to fight his eyes that flapped in panic, poor things. Each time they closed and opened, he was taken to the lake and brought back.

He did not but his father shed a tear as they watched the night sky that night. Little Philip’s eyes were in wonder, as he sat with his father sharing the sky.

“I wonder how we look from up there.”

Said his father as he dried his throat.

His eyes opened one last time as he championed them. Finally, he thought, he had won over his juvenile body which would not, in its childishness, let him watch, from the sky. His eyes were those eyes of wonder that sat beside the lake. Gleaming forever.