You are here: Home / Family / The Broken Stone 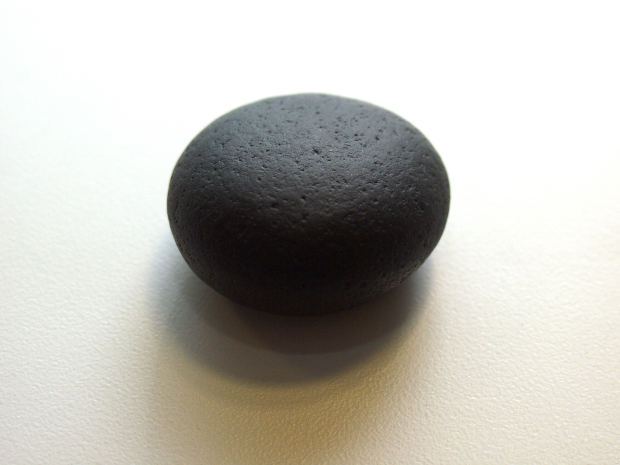 My sister was a shame to him and I was his pride. When he used to bring big people to our house, I was presented as his only child and my sister was dumped in a room with a few coloring books. She was too sinless to see everything through it. Too innocent to grasp it all.

She used to think that daddy didn’t want other people to cast an evil eye on her princess. But no, she was a shame. An unwanted child. He told me that. Shame on me I heard that.

He used to call me in his room and used to put big hands on my drawings, patted my shoulder, messed my hair and asked me to leave. When Cindy came, he used to leave. With a shrug, of course. She was so much in the dark side that she took it as daddy’s way of saying “Bravo”. My acquirement to hold daddy’s attention meant nothing when Cindy was banged besides swept under the carpet in front of my eyes. Her blue eyes reminded me of mom. It would have been different if she was alive. It all would’ve been different.

He never loved anyone except himself. I was just a way of seeking admiration from his clients. People had good impressions on him because of me considering the way I was raised. He never gave credits to mom. Like she was no one.
Between me and him, love had never existed. Only a fake-selfish relation, and between Cindy and him, not even that.
She thought of him as his world. She smiled whenever she saw him coming from the office. He never paid back.

When we all sat together for the dinner, she was asked to sit in her room and have her meal without making a single noise. She thought daddy was teaching her manners. I was so helpless. I always listened to her approving daddy and he struggled to even remember her name. Linda, he used to call her. That too, hardly.

I could kill him for that. For never loving my sister just because she was different. Not like me or like him. She was like mom. Pure, Crystal.

But before that,
“Dave, God is calling me. He wants me to stay with him. He says it’ll be nice to see Dad from the clouds. I have left some candies in the freezer for you and dad. He loves the blue ones. I have left a drawing too in my room. Show it to dad and tell me if he moves his shoulders up. It means he loves it. I’ll miss you and dad too. Good night.
– Cindy “

I was in the school and when I came home. It was lying on her bed. That note.

Nothing could break me more. She was leukemic patient. No one knew about it. When she fainted today, our neighbor took her to the doctor.
Bad news was awaited.

“I’m sorry we couldn’t save her”

I took her to the garden of remembrance asked the Father to add a few extra daisies in her funeral. She loved them. In a way, I was when she was being pushed inside and moved to the other side of the world. The good side. She’d be safe. Dead but safe, whatever she’d see would lack lies. She won’t see the real ugly world but a better one.

Her blue eyes won’t now assume the wrong things. She won’t be a shame there. She will be loved. I’m sure she will be.

2 days later he was home. I showed him the note, gave him the candies and the drawings. He was in all of them. He saw them with nothing on his face. Deadpan.

“You killed her, dad. She loved you. She wanted you to love her. You never did. She always stayed unwanted. She is dead, dad. Happy now, are you?”

Inside.
He deserved it. Whatever was served? It was all his doings. All his. No one could do what Cindy had done. What her note had done.