You are here: Home / Family / CARETAKER 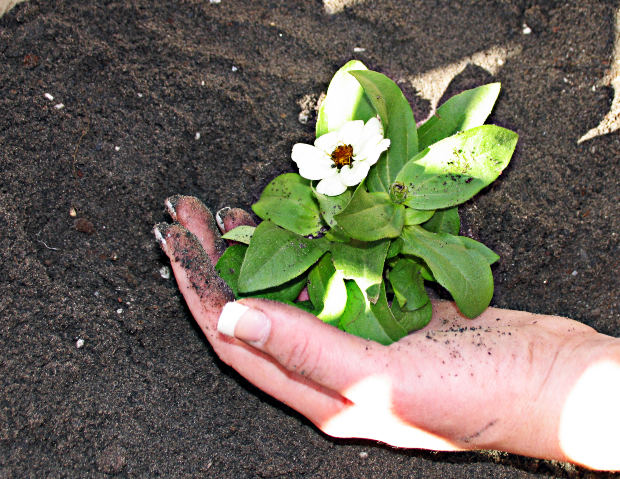 Johnson came to this city for a good job. He heard that it is not difficult here for the talented people to get good jobs with no long waiting. The house owner Roberts is stout and her eyes are like that of eagle. He told her that his name is Johnson.

“Johnson! What are you doing?” The house owner Mrs Roberts asked as if examining him seriously.

She is old woman with sharp eyes. Her ears are experienced to recognize the truth in the voice she hears. She may look as a hard woman, but her heart is always wishing to help the needy. Johnson was in a fix. He is thinking that shall he say the truth or shall he say the false? As he is in fix, he cannot say something like boasting. As a matter of fact, he is always a person believing in truth.

“Madam, I am in search of a job. I can be a good writer for any film company. I can be a good singer also. I am a staunch believer in my abilities. I don’t boast. I have just 20000 dollars in my bank account. I know that the rents in a city like this will be not like that in a small town. Whatever you will charge for a good, simple and furnished room, I will pay. Then, I will try my luck for at least 6 months. If I cannot get a proper job or income source in six months, I will say goodbye to this city. If I can show my ability and stand in my career, I will be comfortable to stay here for any long time, until I have my own flat here.”

She looked at Johnson amazingly. She quickly changed her opinion.

“Johnson! I wish you have your own flat soon. Don’t worry, I don’t ask you rent for the six months. After that, if you wish to continue, pay me 500 dollars per month as your room rent.” She said.

Johnson was again in a fix.

“Madam, why don’t you take room rent in these six months also? Getting or not getting job is my fate. Why you fore go your room rent for a long six months?”

“I like your sincere way of talking. I want to help you thinking you are my long relation. I decided to give you a room free for the six months. That’s all.”

She said, handed Johnson the key, and went in to her home. It is Johnson’s wonder to have a very nice furnished room in a very big building called Sky Castles.

He feels like he is in the sky as it is the top room in the castle. It is in 8th floor with no disturbance. Anybody can come and see Johnson at any time. Johnson was feeling like he is on the peak of the sky castle. There is a phone in the room and so many people call him to see his ability. He wondered how they know about him. It is the house owner Mrs Roberts who is recommending him for good job or good work for him.

The owner of the Sky Castle Mrs Roberts is a well known person in the city. When she says about any person to anyone in the city, it is really a wonder. She is the president of young men Society in the city. She knows so many bright people of the city and all of them respect her, because she never had recommended about any one in her life who is unfit.

One day, the owner of the sky Castle came to 8th floor where Johnson is busy writing some songs. Now, he is writing his songs for very famous film companies.

When Johnson saw the owner of the sky castle there, he wondered. She did not come to his room in these all six months. Mrs Roberts is a nice woman. She is the best example of helping hand.

When she came in and looked at the room, he was still more wondering.

“Mother, I did not add anything in the room. It is as virgin as I had entered here.” Johnson said with a modest smile.

Mrs Roberts saw Johnson with a still more wonder. She expected something else which is missing here.

“I know that. It looks like a virgin bachelor living here.”

She paused for a while.

“I know you are earning well. I told you, I don’t take rent for six months. This is the sixth month. What is your bank balance now?”

“It is above two million dollars mother! I just told you that I have abilities. You have showed me how to make my abilities turn in to good career. I am earning well. Yet, I don’t like to say thanks to you.”

“It is because you are my mother. No son says thanks to mother.”

Nobody knows much about Mrs Roberts. Her husband was a great musician. He earned a lot in his life time. But he never cared much about his family. This made Mrs Roberts unhappy throughout her life.

Her husband was spending all of his time with many women. Mrs Roberts knew that they are like wolves who suck his blood. Finally he lost his fame and lost his money. He was left a poor man in his life when he lost his life. This building is from Mrs Robert’s father, so it is left safe.

Johnson knows that Mrs Roberts is lonely and all her time is spent for social service.

“I asked my sister to come here. I have seen a good match for you. If you like and respect me, she will be very nice life partner for you. She is my distant relation and I know this girl from her childhood.” Mrs Roberts said.

As Johnson is wondering, his mother also came there. She has been contacted by Mrs Roberts.

“My sister saw the girl and their home. She is a good musician also.” Mrs Roberts said.

Johnson’s mother saw him with satisfaction. She is happy to see that Johnson is happy here. Johnson did not give his home address to Mrs Roberts. Then how she could contact his mother? He is just wondering about this.

“Your mother and sister are not unknown to me. When you came here, I have enquired about you and found the details of them. I promised them to bring them to the city soon. You said you buy a flat soon. I feel your mother and sister as my family members. First, you get married. Get your sister married. I will be here to support your family. Until then, your mother will be with me. I told you, she is my sister. So I have to take care of my sister till you turn to make their time with you happily”

The affection is one thing and everything in life. Johnson saw this affection in Mrs Roberts. She is more than his mother. He was happy for she brought a good match also for him.

Johnson married the girl suggested by Mrs Roberts. Now he got more rooms in the sky castle. He did not like the idea to have his own flat. This sky castle is like his own flat or even better. Because, flats are available, but not like Mrs Roberts in those flats who will take care of him. She is his perfect caretaker.