You are here: Home / Family / A Christmas Tale 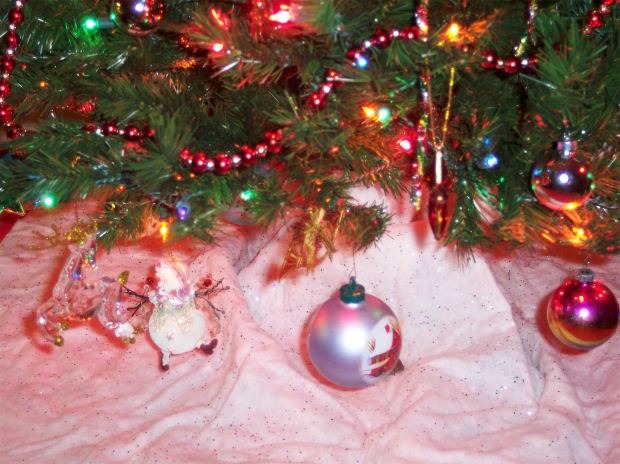 It’s Xmas Eve and it’s biting cold. The chilling wind from North is howling and blowing hard making the wooden windows of the cottage’s top floor open and close continuously with a shattering sound. It has been snowing incessantly and it is unusually cold this time. Joseph was cooking his customary porridge in the kitchen with a mangy cat for company, that  crouched like a ball in a corner of the kitchen near the dustbin on a  carpet, making himself warm and snug, but still he was freezing in the cold. Maybe his natural fur coat wasn’t doing him any good.

Joseph has been staying alone in the cottage since many years and confined himself to the top floor of his cottage. Both his sons are settled abroad with family and plum jobs that they hardly paid him a visit, other than mailing Xmas cards and usual Xmas wishes over phone. He missed them and his grand children badly. Thus Xmas celebration meant just going to the church.He tossed a piece of yesterday’s fried chicken to his furred friend and placed the porridge on the old wooden dining table which was once a pride for him and ‘her’ years back, as it was a costly one then and only they had a piece in that locality. For a moment he travelled back in time.

The table is covered in bright red satin cloth. Roasted turkey,soup,winter fruits, red wine, apple pudding ,light blue crystal glasses, the table is replete with all items and more. Lit candles in silver and golden candle holders were placed at the centre. She arranged it so well & in totality it looked like a royal kingly feast.’Feast is ready’,she called out to him.’Before the feast begins here is a gift for you’, he said and handed her a small pink colored gift box. She eagerly opened the gift box and her face shined with a green glow as the candle light refracted the emerald ring’s color.

Gone are those beautiful days he thought.

Now the dining table is in a dilapidated state and termites were feasting on it off late. But he didn’t want to replace it, for it was ‘her’ selection and he is emotionally attached to everything he bought for her. He slowly walked towards the window to close them and get respite from the cold wind. He was going senile, face and hands crisscrossed with wrinkles.He walked taking one step at a time with the support of his walking stick. He leaned over and looked down from the window.

The town was illuminated with bright colored lights, multicoloured balloons, red and white color dominated them, sparkling Christmas trees, stars, streamers and what not. One Christmas tree was tall enough that he could stick out his hand from the window and pluck it’s ripe fruit, a red ‘balloon’ or a star. A group of people led by Santas were dancing to a Christmas carol sung by two pretty young teenage girls in the wet, cobbled street down. They were moving to the church.The procession being led by a senior Santa,that is, the tallest of the Santas with the biggest tummy,alongwith some small child Santas in red,green,yellow costumes. Some were being pushed and pulled in a sledge by kids in reindeer costumes holding their Xmas gift boxes presented by Santa close to their heart.

Joseph rememberd,years back he was that so called ‘Senior Santa’, for his big tummy and size, but later on he retired owing to old age and the incumbent Santa was doing well, he thought with a small smile in his lips. Carols echoed everywhere and the wooden houses with snow covered roof and lighting resembled a Christmas plum cake with lit candles and icing on top. The wind or snow did not forbid anyone from celebrating the spirit of Christmas.

Jospeh enjoyed the whole sight which was a feast for the eyes and looked northward as the big Church tower bell on the hilltop rang.He was standing in the church for the mass with his family on a Xmas eve. That’s when he saw her. She walked past him like a breeze and her flowing hair brushed against his face. He felt a soothing effect and fragrance of a flower .She turned back and looked him with her expressive light green eyes and gave him a sweet sorry. She was the main singer and led the coir team. The young lady looked like an angel in pure white dress with lotus eyes, descended from heaven singing Christmas hymn only for him and the violins played only for them. He thought he saw a halo over her head and she had wings. Both of them felt they were destined for each other.

“Joseph do you take Josephine as your wedded wife?Yes.

“Josephine do you take Joseph as your wedded husband?Yes. Amid great pomp and ceremony they got married on December 24th.

The jingle of church tower bell took him to their golden days when they started their life from scratch in this town and celebrated Xmas eve which is their wedding day. From the tower bell he turned to the barren plot nearby. It was once a vineyard which they owned. During winter they used to pluck winter fruits like grapes and make wine and store them in cellar. He was feeling nostalgic.He has been living alone in the cottage for sometime now. Few years back fate was cruel on him. An epidemic snatched his beloved, the whole and soul of his household on this divine day.Dec 24th, Xmas eve, their wedding day and Josephine’s death day. It is a day of divinity, pain and gain. Her bereavement almost killed him psychologically and physically. His eyes filled with tears as he placed himself in his arm chair.A soft cute hand came from behind and closed his eyes.

’’Happy Xmas grandpa’. His youngest grandchild named Josephine wished him. Joseph turned back to see that his two sons and family has come to celebrate this year’s Xmas with him.

’Sorry, dad.But this time we didn’t want to let you celebrate Xmas alone here with mom’s memories. We are here to share it with you. And this time we are taking you with us’,said his elder son.

Joseph thought God has heard his prayers and sent him his sons after a long time. This is the biggest Xmas gift he could ever get. As he looked at Josephine’s framed photo on the wall he felt she too had tears of joy in her eyes.