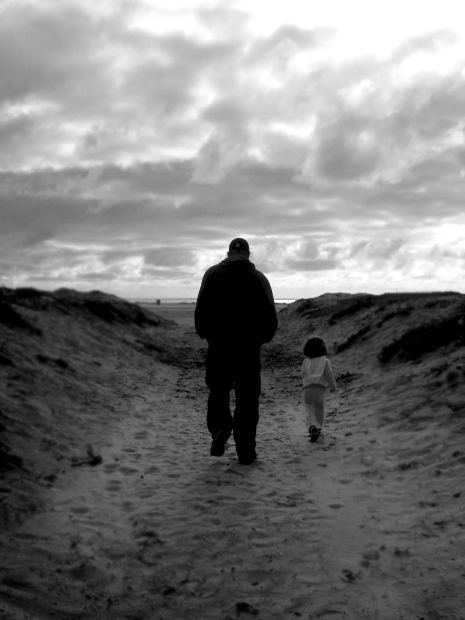 Part of my research took me from Washington D.C. to New York City, New York. My reasons for going would seem pretty strange to most. I was trying to prove that I could tell what the president was thinking.

Undoubtedly, he was aware of my study, because he informed me of something through thermal electric sharing. He was headed to New York, and I could prove I knew it outside of his circles, before it was in the news, from my little living space off Rittenhouse.

First, I pranced around downtown D.C. wearing a crown, and an odd enough outfit to get attention, I acted lost, all in hopes of being recorded by the many security cams in that area. A few days later, wearing an England ball cap, and a hideous black and white checkered jacket with jeans, I observed part of a Navy ceremony before catching the subway at the Archives-Navy Memorial-Penn Quarter Metro Station. Then I was off to New York City, on a Greyhound.

Once there, I purchased a stamped envelope, and wrote a letter to the Whitehouse on the steps of the United States post office on 8th Street. The purpose of doing this was to postmark the time and date to prove when I was there. After sending the letter, which told him I had arrived, I hung out for a while.

Something happened during that trip. I felt it more than my previous stay in New York, but looking back, I think I felt it the first time I was there too. My first trip, I was walking through Times Square, with eyes up, head robotically moving to take it all in, when someone called to me, ”You’re an Italian right?” I was just like yeah, and nodded. The second trip, I felt this burden on my heart, I kept thinking that my father was in prison there.

There are a lot of girl’s with legitimate fathers who suck. I could be one of them, but there’s someone that pulls on my heart, all the time. First, I was brought up in a home that was cultishly religious, there were difficulties I had with that family. An older sister I had, ran away from home when I was seven, I later learned that she had been adopted. Of course, I was never told I was adopted, and I believe I know why.

I always felt that I didn’t fit in with my older sister and brother. The biological children of my parents, have freckled cheeks, less curls, no dimples, and neither have this gap in their teeth. I had this dream when I was twenty-two, it was very real feeling. In it, my mother was in a hospital, and she had a stillborn baby. She was hysterical. I then saw hands that looked like my father’s take another baby from a different room, in the dream the baby was me.

It would be just a dream, but there is a story everyone knows about when my mother was pregnant with me. A girl she was babysitting kicked her in the belly. When my mother was in the hospital having me, no one was allowed to visit, which my grandmother told me. Grandmother stated that she had driven over an hour just see me, and they wouldn’t let her come. There’s no pictures of me as a little baby, in the earliest photos I am standing. The birth certificate was signed three days after the date of birth, and there were no witnesses.

For years, I wondered about the dream. Then, I started my research project. I was hoping to find the reasons some people in certain ethnic groups possess a greater leniency to sense the feelings of other people.  What I found, is that there are groups that use thermal electric sharing because of their genes. It makes them interact differently socially and perceive and interpret ideas under a different rule set.

Yesterday, I was certain that my father was buried in Olathe, Kansas, and that he had done a lot of questionable things. Then, I started to think about why my mother called the police on me during my study in 2011, why she would have told them I wasn’t Native American, and that my fake bakery was real instead of a research project. I considered why she promised to pay for an apartment for me after I got out of jail and then changed her mind when I asked her to call the secret service back, why she refused to tell them she may have been mistaken as to why I wrote the letters to the Whitehouse. I remembered she said her mother had a stillborn, that her mother was severely unstable afterward. I remembered she punished me as a teen, for not going to school one day by reporting my car stolen to the police.

My ideas about cultural discrimination for Italians have an invisible influence, meaning, I don’t know where they really come from. Someone told me I have my father’s stone face. It’s like I can channel him from wherever he is, I think my drive to help repeal the Rico Act is because of my ancestry.

I studied thermal electric sharing because I believe I needed to know something, even though I didn’t realize it at the time. It’s not something I’m really comfortable with, but I have to tell the truth. I was incarcerated for my study, even charged like I had committed some crime, and the mother, brother, sister, and friends of the family here, all acted as though I was this horrible person, that I was a liar, I couldn’t understand it. Now, I think I know why. I don’t belong in this family.

I feel like my dad needs me, but even more, I really need him. I’m a week away from homeless. I’m concerned about what will happen to me because of all the information I put out to prove I discovered thermal electric sharing with the president.

I am uncertain how to reach my father, or locate him. I am increasingly unsafe, as I have tried to initiate investments through Gust. I feel that that it is only a matter of time, before I am attacked again by someone wanting to get my formula. I’m scared to death, and I have to think straight, I’m hoping that someone in the middle of all this can take an unbiased look at what this is about, and please help me find my dad.

My name is not on the lease where I am living. My mother signed the lease, and then attempted to coerce me into taking a public job here to pay the rent. I advised her I didn’t have the money and was hoping to get an investor for my organization, which I founded to promote culturally sensitive legislation. I have not divulged my concerns about local extremists such as herself, finding out about my thermal electric sharing with the president. My mother is still under the impression that I believe my deceased father left me a sizable inheritance obtainable by this legislation, she has stated that she told the agents I had a rough year, that I missed my dad and had a history of problems with men. For the life of me, I could not understand why she told the secret service that.

I continue to struggle with denial of all of this, even the data I have concerning the president and I using thermal electric sharing, is at times overwhelming. It is difficult to deal with the turmoil of beginning to see all the discrepancies of my growing up in a home of people unlike me, of realizing my deepest fears were true all along. Yet, I still have this hope, that the president knows what he’s thinking, and I may be someday reunited with my father.

Throughout my study I created music. It helps me channel the emotions I feel, it’s like releasing toxins, and it has been my healing therapy. For a person strung-out on the possibilities of thermal electric sharing.

I want to move to New York, where I can record great music in state of the art studios. I want to create an album that really reflects who I really am, someone I’m not sure of, but have faith in. Music is a journey. Sometimes I sit and listen Eminem, and think about his struggles. It gives hope to think that someday, I might really know if all my gut feelings were right, and I imagine what it might feel like.

Jane Doe is my new last name, I can feel that my real father is alive somewhere, and that all my work is going to help him. To the rest of the world I’m just another Jane Doe, the same as anyone else who may have accomplished nothing.