You are here: Home / Family / Life is like Seasons 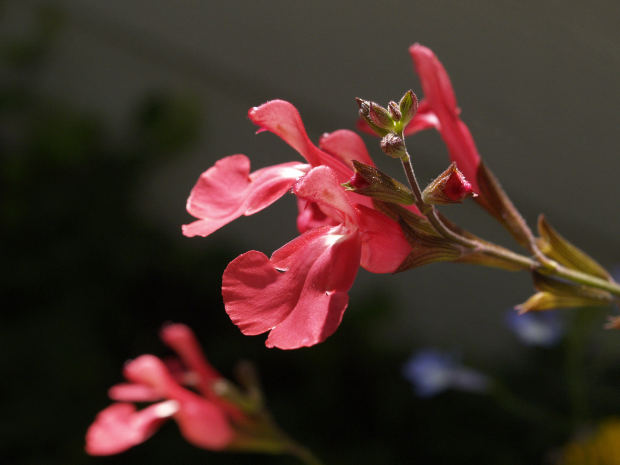 Jagan was in the midst of a turmoil in his real life while acting in a drama in the school Theater club. He was enacting the role of a beggar in the play that was titled ‘Turmoil in life’. The entire play revolved around him.

Jagan was all of 15, yet he had to act more than that in real and reel life. He had lost his father while writing the model exams for the 10th standard and the realization that his father was no more was something he was yet to come to terms with. He had witnessed a lot in life in the last month. The model exams were in January and the finals in March. He had returned to school only a couple of days back when the teacher broke the news of the drama and the part he played.

Jagan was athletic and sprightly built. He used to excel in studies too along with being exceptionally good in extracurricular activities. He however was not sure if he could do justice to the role of the beggar.

‘You can do it, only you can do it’ said Grace madam. The drama teacher had amazing belief in her pupil. She believed his eyes spoke.

The day was clear. Two more tests to go for the model exams. Today was Mathematics, Jagan’s favorite subject was not Mathematics. Numbers didnt mean much to him, yet he would get the high 80s and be happy with it. He was studying hard with many worksheets round him. It was 6 am and the old clock struck five times. The sixth time was accompanied by the loud sound of the phone ringing.

Jagan picked up the phone and said ‘Hello, who is this?’.

It was his aunt’s voice that responded ‘Jaga, give it to your mother’.

She was in the kitchen at that time as he could hear the clanking of the vessels and his mother coughing from the fumes of the wood fired stove. While he hollered out to her, he thought to himself ‘Wonder who has died today?’ Early morning calls were only for some sad news to be shared and thus spoiling the entire day.

‘Yes akka, tell me’ Jagan’s mother Savithri spoke on the phone while wiping the sweat off her eye brows.

The gas cylinder had run out of gas two days back and till the new cylinder was delivered, cooking over the wood fired stove was the only option and the weather in Kerala didnt help either. Kochi was extremely hot even though it was winter elsewhere in India.

‘We just got a call from Chennai, your husband is down with Typhoid. Should we not go and check him out?’

Savithri was shocked, worried and surprised, her husband had been unwell even on prior occasions, however why did sister want to accompany her. Anyway, she said ‘Ohh, my god! Hope he is good. Who is taking care of him there?’.

‘Dont worry, Anand is already there’

Anand was Pushpa akka’s eldest son. He was around 22 years old, but far mature than his age. He would be a good person to be by her husband’s side, Savithri thought to herself.

She was not worried about the Idlis that were cooking on the stove right now. All she wanted was to be by her husband’s side. She kept praying and chanting his name in his mind. Jagan could see the sweat on her forehead coming back repeatedly. Partly from the stress and partly from the heat.

‘Akka, it is Jagan’s model test and also Kumari is yet to return from her study trip’. She told Pushpa.

Kumari was the elder daughter who was in her first year of graduation.

‘That is ok, health is more important’ Thundered Pushpa who was notorious for her temper.

She cooled down soon and said, ‘I mean, it is ok, we will come back soon. Anand is anyway there. He can take care. You dont have to stay there.’

Jagan wanted to complete his examination, however was still contemplating. ‘Amma, appa is unwell, but I want to complete my examination. Just two more remaining.’ He told Savithri.

‘Akka wants us to go, let us go.’ She was already packing her bags while speaking with him.

‘But what about Kumari akka?’ He enquired.

‘I will give the key to Janaki and she will give it to Kumari when she is back’.

Janaki was their neighbor. Jagan was friends with her son but shared a strange relationship with Janaki. Janaki was a widow who was in her late 30’s. She still was an attractive woman to most of the men around the place. However she had not remarried and was  an elusive character to most of them.

Jagan loved to plant vegetable saplings that would yield fresh vegetables when he found time. A problem he had which his mother used to always point out was that while out in the open, he would not use the toilet in the house. He used to always liked to pee in the open. There was a favorite wall of his, that was his target. The wall was very close to the Janaki’s house. Janaki used to be watch him while he was peeing. He saw that once and ran into his house. He did not tell this to his mother. Janaki saw that he saw her looking at him while he peed. He realized something was amiss. From that day on he was hesitant to go to her house to play with her son.

One day however while playing cricket, the ball bounced into the verandah and he could see that it had gone into the house. Janaki’s son Somu was not around at that time. He told his friends to go inside to get the ball, but as he had hit the ball they asked him to go and fetch it. He went inside the compound. His heart was beating fast as he saw the location of the ball after searching in and around the place for a long time. He decided he would run out after snatching the ball. He slowly pried in, he saw that Janaki had not seen him come in.

As it was early morning and she had probably just completed her bath, she was just in her underwear. He felt a throbbing feel in his underwear as he completely froze after he saw her. His hand hit a vase which was near the door. She turned around and saw him staring at her. She slowly advanced towards him and reached for the door and latched it. He didnt have a control over what he did and she didnt want him to have any control either. The then fourteen year old Jagan lost something at that tender age which people wait for many more years to lose.

What happened that day was something that was not on expected lines. Janaki and Jagan then made it out on several occasions till Janaki once actually had to have an abortion. She did this without anyone realizing it. It was a shocking experience for Jagan to realize that he could impregnate someone. After that Janaki used to distance herself from him, despite him making advances again. All of this was unknown to Savithri.

After packing her bags and locking the house, Savithri handed over the key to Janaki. ‘Hand this over to Kumari when she comes. Jagan stared at Janaki’s breasts as he could see them through the silhoutte of the clothes she was wearing. Savithri then along with Jagan walked to the main road. They got into a rickshaw and went to Jagan’s school. At the school, she explained the criticality to the Principal. ‘Madam, there is no other way.’ she said. ‘I would have wanted Jagan to attend these tests, I see him in the top 5’ the Principal replied ‘ However as the situation is not too good, I will let you go. Please Jagan, continue to work hard on all subjects. You are a rank hope for us.’ She said. Jagan nodded in approval. The clock struck 10 at this time.

By this time, Pushpa and Raman, Pushpa’s husband were waiting in their white contessa car. ‘Are we driving to Chennai?’ Savithri asked. ‘Yes!’ was the response and they drove away.

They kept driving only stopping on a couple of occasions for tea and snacks and for Lunch. They reached Jagan’s residence, a one room house by 12 am. Anand was waiting outside. There was nothing abnormal there but for a Police jeep parked near the gate of the house. Jagan, Savithri and Pushpa got out of the car. Throughout the drive Jagan had slept like a log. Savithri and Pushpa hardly spoke about the reason to visit Chennai and even though the topic came up a couple of times, Pushpa changed the topic of discussion.

Slowly they moved into the house. Savithri’s eyes were fixed on the police jeep while she kept walking to room. As she walked inside, she saw half a coconut with a wick kept. She froze. ‘The body of her lifeless husband lay there.’ She fainted and fell with a thud to the floor.’ A policeman was by her side when she woke up. ‘Madam, are you ok now?’ He asked her.

Arrangements were being made for the funeral. Savithri was now a lifeless body. She was there, but it was mere existence. All memories of her husband ran through her mind. Suddenly she started smiling and fell to the ground again. This time however there was no revival. Jagan was wondering to himself ‘A day had changed his entire life.’ Life was not the same anymore. When Kumari returned, she was in trauma care for quite sometime.

Applauses and more thundering applauses filled the air. The auditorium was filled with claps and thunderous reception to the drama which had Jagan as the central character.

Jagan’s play was a hit in the school. His eyes filled with tears he looked towards the heavens. ‘Mom and dad, this one is for you.’ In the audience, Kumari smiled. She was happy for her brother.