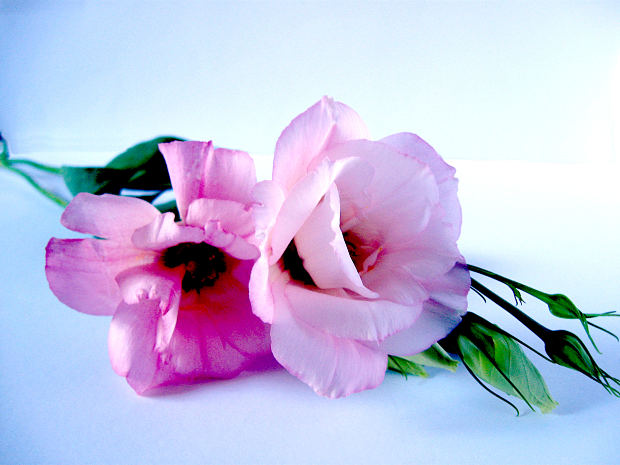 It was a queer feeling, the one which I had never experienced ever before, not until today. It was like the world which I had been in suddenly had a 2012 written all over it, like a bird whose nest has been barraged by a cannon, like a captain whose ship has been torpedoed, like a feeling of leaving your loved ones and going to some other place for studies, well, it wasn’t like a feeling of leaving those loved ones it was a feeling of that in-fact. And what adds  salt to that injury of mine was leaving them all for the sake of these studies! Phew, how disgusting!

I had recently been matriculated as an undergraduate at the Season College in the Infinite city which’s nearly 200 miles away from the place which I stay at or rather about to be ‘stayed at’, the Crystal city. Studying, obviously was a reason for my exasperation, but there was another reason which is perhaps why I was that offended. Yes, the reason was leaving my love, the first and the only love in-fact and the one which I hadn’t been deprived of from the day I got it. Nobody can ever replace her in my life. She was the reason for me living happily, she was the sweetheart of my life, she was the goddess of my life, she was my life, is the line which perhaps will say how much I loved her and yeah, perhaps well, not perhaps she did love me more than I did, there wasn’t a day when she let that anger on me, when I committed any mistakes or blunders if I have to be more precise, affect our relationship (needless to say that you will get angry on someone you love, if you don’t then probably you aren’t in love with them).

She winked at all my mistakes and loved me like no one else could or neither can anyone love me like the way she did. There was never a day when we didn’t meet each other, never ever! Oops, sorry there were occasions when I didn’t meet her for a day and she would contact me and ask me to come to her. Well, I guess this is quite sufficient to tell how much she loved me. But now, we have to manage not seeing each other for nearly 3 years with some 10-15 occasional meets. She could hardly digest the fact that I would be leaving her and leaving her for 3 eternal years. But, yeah she did manage to take it all, simply because she loved me and she wanted me to be successful and achieve wonders in my life.

The stage was set and the emotional scene was to be shot without any retakes at the railway station, well, is shooting the right word? I guess so but it is arguable though, since this planet is filled by both the Atheists and the Theists (Just used the alphabetical order to sort out which ‘ists’ to mention first and there’s no mental role of mine which has played a part in that) and yeah there are some Agnostics as well to compensate these two classes.

We both reached the railway station and it was one of the horrifying moments of my life not because there was something very scary, but it’s because I would have to leave my love and all the dear ones and go to some alien place to make my future bright, but to be very honest I could only see darkness at that point in time and so did my love not the seeing of darkness case but the one prior to that, probably she was more horrified than I was, but as they say ‘All your true loved ones want is your happiness and nothing else even if they aren’t a part of that happiness’ My love did make me realize how true that someone said.

The train arrived and it was all set, I didn’t show too much emotions neither does most of the men. Do we?

But women do show the emotions and somehow even after she tried to control not to disclose those emotions, those tears did sneak out of the eyes and rolled down on the cheeks. No offence but, I’m quite sceptic and kind of a cynic, I had heard this from someone, ‘When a tear rolls out first from the left eye, then that’s because he’s sad or he’s in pain, but when the tear that sneaks out first is from the right eye then he’s happy’ I don’t quite know how true that was but, I just checked out which eye cried first? Well, I could see the tears coming out simultaneously from both the eyes, then I wondered why did this guy didn’t mention about the cry when both the eyes shed tears, the first thought that came to my mind was, may be she’s crying because now she will have to do all her works which I used to do and she’s happy because I wont be with her anymore for 3 years atleast to bother her. Well, that ain’t true that was just a thought of a cynic. You can understand if you are a human why someone’s crying and we don’t need these left eye right-eye theory to find out the reason for the tears. She hugged me and embraced me and while I was about to get on the train, the silence was broken by her when she spoke out those caring words,

“Take very good care of yourself honey, eat well, I don’t want you to be turned into a cluster of bones when you return after your graduation”

“Yeah, as if I’m a balloon filled with fat now.” I mocked not because I meant it just to make her feel that i’m quite alright. That’s it, the train left and I was on my way to the Infinite city.

Days passed on and I started to get use to the atmosphere and conditions of the Infinite city and was becoming used to being away from my love, probably someone has said it right, ‘Time and distance are two things that can diminish or even uproot any love that was there between two people’ and this was very true in my case, but she wasn’t affected a bit by these time and distance, she still was as committed as she was earlier, she still was as enthusiastic while talking to me as she was the first day, she still called me everyday and asked me if I had my lunch/dinner and asked me of I was coping with new atmosphere and how were my studies going on.

But there was a week which went by without a call from her and I didn’t bother about it too much either since I was no more what I was, I was more practical in my approach, I understood that everybody will be busy in their own life and why shouldn’t they be? Afterall it’s their life. But, as they say ‘When the rain of love which you used to get from someone suddenly stops pouring, you will feel as dry as an uprooted plant.’ I started to miss that love of hers and decided to call her and also I was angry on her since I had my exams after two days and she hadn’t even called me to check out how I was doing and how were my studies going on.

The phone kept ringing but there was none receiving the call, I decided to give another try and yeah she did pick it up this time,

“Don’t. Don’t talk now. Where had you been all these days? Why didn’t you call me?” I yelled.

“Sorry honey was bit busy with work out here. So couldn’t find time to talk to you. I’m extremely sorry honey, how are you and how’s your preparation for your exams going on?”

“Ah, so now you remembered to ask these huh? That too after me calling and say what?! You couldn’t find time huh? This is incredible. And what do you think I have loads and loads of time which I have harvested and now I’m reaping it huh? Fine, it’s alright. I too will become busy now, I too don’t want to talk you too. Goodbye.” I shrieked and disconnected the call.

The next morning I woke up at 11 since I was studying all night and to my suprise, my brother had visited me along with my Mom.

“Why did you come here now?” I asked my Mom making that face of mine a grim one.

She came towards me and hugged me crying, as she hugged me I could feel that body temperature of hers which was literally burning hot, one which would turn any stubborn mind into ashes.

“What’s this maa? You are literally burning!” I asked

“Sorry honey, I didn’t call you, I should have. I’m sorry honey” mom sobbed.

“It’s ok maa but, what’s this? What has happened to you? And in this condition you travelled 200 miles huh? Holy hell!! You are crazz.”

As my brother interrupted me and shot those bullets framed of words, “Shut your mouth you idiot. You know what mom’s suffering from Typhoid from the past 10 days and she could hardly stand on her feet and now she came here all the way from Crystal city just to calm you down so that it won’t affect your studies”

My mouth was literally zipped on hearing this and there were no signals which were even trying to come out of my brain forget converting those signals into words.

As by brother continued his yelling “And because of you I had to leave all my work and come here. You non-sense.”

“But why didn’t you tell me maa?” I asked mom politely looking into those affectionate teary eyes and holding her cheeks.

“She didn’t want to disturb your mind by saying that she’s unwell it seems.” replied my yelling brother.

(“I didn’t ask you, I’m asking mamma.” was the signals sent by my brain to be converted into words, but my heart stood before that conversion.)

I just hugged her tightly and cried and said how sorry I was and never any prizes for guessing this, she replied saying, “It was all my mistake honey, I should have called you”

Well, what can you say to a love which is this unconditional? Well, there are hardly any words which can express that love. Love of a mother is simply supreme, sovereign, paramount, peerless, nonpareil and what not else. And with all these we still fail to understand the love, true love of a mother.

I least bother what they said, ‘Time and distance are two things that can diminish or even uproot any love that was there between two people’ sorry Mr. Whosoever, but this is not true in case of a Mother’s love and affection towards her children. Nothing in this world can ever affect her feelings for her children. It simply is unmatched.

We spend so much time in gaining love from the ones who don’t even bother a cent about us, but why can’t we give it back to them who show it to us no matter what you gift in return to them and make us feel that we too are precious. And, what do we manage to give in return to them? The pain? That impatient response on being asked something? Torturing them mentally? Putting them into old age homes? Is this what they deserve?

Well, it’s time to give it a thought people. It’s time that we understand that we are supposed to repay the loan which we borrowed from them when we were young. Well, this might not be the way to say it, but then, when people are this senseless. I’m sorry to say this, there’s no other way.