You are here: Home / Family / Miracle 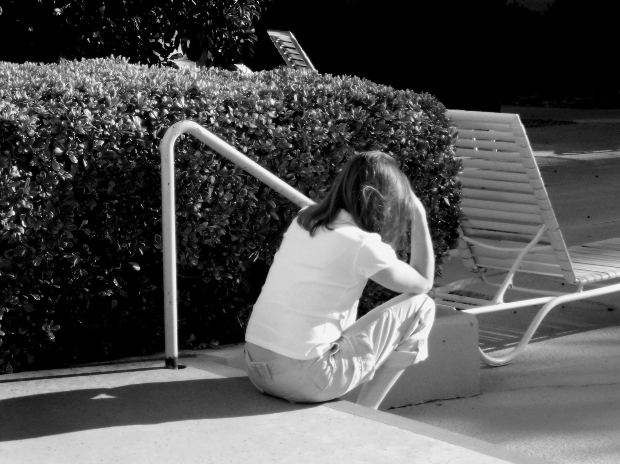 “Pop!” .” There goes the fireworks.” said Melissa looking up into the sky.

Her heart sank and memories flash in front of her eyes. Oh… how she wish that she were able to celebrate this festival with her mother. The pain in her heart was unbearable as tears began to roll down to her cheeks.

“Huff…Huff..” breathing heavily looking into the sky hoping the stars will bring her mother home. She went back inside,where there’s warmth around her. She jumped into her bed and holding up her phone. “Sign” with full of disappointments as she squeezed the pillow next to her and fell asleep. However,the little voice inside of her screaming “why?why?”

She was so happy and she ran down the stairs. Quickly, she surrounds her arms around her mother and she burst into tears.” Mum, I miss you so much! Promise me you never ever leave again!”

Suddenly a soft touch on her head and a soft voice said “Yes, dear”.

“Is this true?” She asked herself.

Then, a loud knock broke into her slumber and she woke up realizing it’s only a dream. “Hello, sleeping beauty. Better get ready before our relatives arrived. You didn’t want them to see you in your pajamas do you?” her father told her.

“Alright. I’ll be downstairs in a few minutes.” said Melissa. She prepared herself although her mind was continuously thinking of her dream.

“Dear,dear” but Melissa was day dreaming about her mother that she never bother to listen to the voice calling her. Then, a woman hugged her. Melissa was conscious and she looked up, surprisingly it was REALLY HER MOTHER. Melissa hugged tightly until her mum was catching her breath for air.

” I know Melissa but I’m here because I and your father would like to tell you something important.”

Melissa look around to searching her father and realized her father busy preparing breakfast for the guests. Ever since her parents went to their separate ways, Melissa’s father and mother never ever met each other face to face and they will try to not see each other although they are in the same house.

Melissa went into the dinning room and called her father. Her father face turns black as Melissa told him that Melissa’s mom wanted him to come into the living room. Melissa was glad thinking that her parents are going to be back together. As both of them sat a distance prepared to tell the news to their only daughter.

” Dear” her mother said ” your father and I decided to divorce.”

Melissa heart just broke into pieces as she heard the news. Her eyes began to be full of tears.

“It’s for the better” said her father. “Melissa, you have to choose who you wanted to follow.”

Melissa’s heart was shattered.” WHAT!A DIVORCE?WHY?”talking to herself. Melissa can’t stop herself from crying as she was so depressed. She turned away from her parents and ran into her room.

“THIS IS ALL YOUR FAULT!”said her father.

“MY FAULT? IT WEREN’T FOR YOUR STUPID DECISION. THIS WOULDN’T HAPPEN!”said her mother.

Both of them began to quarrel. Melissa heard screaming and shouting but she was too depressed to get into her feet to stop her parents. “Why me?Why?Why does my parents have to be separated? Why they can’t try to get along?”

Suddenly, the quarrel stopped and Melissa heard the gates were opened. She went downstairs as fast as she could but it’s too late as her mother already left. She saw her father was sitting on the couch restless and told Melissa to have some breakfast before going into the her room again. Melissa obeyed her father and she went into the dinning room. She ate her breakfast slowly because she had no appetite. She fed herself while tearing herself up. Although the food was cold, she continuously eating hoping that she’ll eat till she die but failed. After finished her breakfast,she went back into her room and she look outside the window that everyone was having fun celebrating. How she wish she was able to switch life with other people!

“Buzz!Buzz!” realizing it was her phone that was doing the buzz. She took up her phone and saw there was a message from her mom.

” YOU AND YOUR FATHER HAVE TO GO TO COURT ON MONDAY.

THE JUDGE WILL DECIDE WHO TO HAVE YOU”

Melissa dumped the phone to her bed as she continue admiring people’s lives. Gazing into the clouds,she wish that her life would be better like any other family. Sometimes,she have to do everything on her own and her parents will always be busy for her. She sometimes upset when she saw all the parents waiting outside the school gate for their children because she wish her parents was able to do that too. Then, Melissa hold up her phone and dialed the first contact number on her phone list and waited for her friend to answer her call.

“Hello, Can I talk to you for a moment?”asked Melissa.

“It’s my parents, they quarrel again and they are going to divorce. My mum texted me that my father and I have to attend court on Monday and she said that the Judge will decide my mother or my father to have me. What am I suppose to do? I never want this day to come!” Both of them crying in the phone.

Alice pitied Melissa so badly that she wish she will able to help her friend but she have no power to do it.

Melissa replied” thanks, Alice.I’ll tried to be patient.”

Melissa ended the call and she lying down on her bed dreaming that she had a happy family. Never realize her eye lids began to be heavy and she fell asleep.

Melissa woke up and realized that she was unconscious for a few days. She saw her father was next to her while her mother was in front of the bed crying.

“What happened?” Melissa asked. Instantly, both her parents hugged her.

“The doctor said that your blood pressure was low and you never eat properly that cause you to be unconscious.”said her father.

Both of her parents, quickly help her on a wheel chair and they wanted to push the wheel chair but Melissa hesitated and called the nurse to push her wheel chair. Both of her parents was surprised with Melissa’s action and both of them knew the reason behind her consciousness and behavior because she was very depressed. Melissa gazing the park and  suddenly a woman with brown hair and a business attire stand in front of  her.

“You must be the famous Melissa!” said the woman.

“Yes, who are you?” questioned Melissa.

“Oh, how silly of me? I’m Lisa, your mother’s lawyer.”said the woman.

“Oh…”signing and she remembered the problem.

“So, are you feeling any better?”asked the lawyer.

“Good, I have a few questioned for you.”said the lawyer. ” I want you to choose who do you want to be with? your mum or your dad?”asked the lawyer.

” I don’t know” said Melissa but a voice inside her screaming ” How can I choose between my parents?  Do you know how difficult it is because I love both of them! They should think of me. Do they care not for how I feel?” Melissa squeezed her palm and she looked away, hoping she was able to say like that.

” You have to make the decisions young lady or the judge will choose who she feel is suitable for you.” said the lawyer. “

Melissa can’t control her mouth and the little voice inside of her said through her lips ” Let it be!”

The lawyer was shocked by the words and left.

The following day, Melissa was in the court and she saw both lawyers from both side are fighting to help her parents. Melissa was crying for the whole time because she was tormented through out the fight.

“Pang!Pang!” the judge knocking the little hammer in her hand against the wooden block. “Okay, the decision has decided. The child will go to….”

Melissa quickly stood up and walk to the front and she yelled “Enough!”

Everyone was shocked and the lawyers whispered to her and said ” You can’t do this! Go back to  your seat.”

Melissa ignored and continued “Mum, Dad. Both of you!Stop it! Can’t you just get along? Don’t you ever ask how I feel?Everyday, I cry because of both of you. How selfish you guys are only think of yourself! Everyday you torture me tormented me until I was unconscious! Are you happy now that I’m sick because of both of you? Maybe you guys wanted to fight until I’m in the grave!”

Melissa burst into tears. She knew that no matter how brave she confess,her parents still unwilling to get along. Melissa was sent to her aunt’s house for a few days. Melissa was very upset although everyone tried to cheer her. She knew that she was going to leave her home any sooner.

Then, her aunt said” Melissa it’s time for you to go home.”

Melissa sign and nodded her head as she packed all her clothes prepared to leave.

“Goodbye, everyone”said Melissa as  she wave her hands to her cousins.  Melissa sat at the front seat and stared at the window the whole journey and she never realized that her aunt was talking to her the whole time. “Well, here we are.”said her aunt.

Melissa opened the seat belt and ready to get down from the car.

“Everything will be fine.” said her aunt.

Melissa pulled her luggage as she went into the house. She realized that the house was pitch black.Suddenly, the lights were on and she saw her parents was next to one another. She was so happy and she hugged both of them.

” But you have to stay with me” said her father.

“What about mum?” asked Melissa. ” Your mum will always fetch from school everyday.” said her dad. Although, there a little improvement, Melissa was happy.

A few years later, Melissa was old enough to have her own family. During the festival, she heard her parents joking and talking to one another and both of them decided to get back together. Melissa turned her head and leave her parents alone with a big smile on her face thinking that a miracle does happened if your patience.