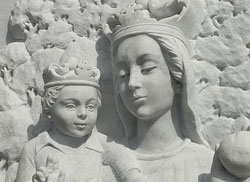 She had lost the track of time, she no more knew mornings or nights, neither did she notice the passing days, weeks or months. She was physically alive, but mentally dead. It has been a year since she lost her only child forever. She had always felt she was dead along with her kid. Life had become static, her world had come to a halt since that broken day. Nothing grabbed her interest, nothing bothered her, she was always lost in her thoughts; and that gloom mirrored on her young and pretty face. People say “time heals everything”…no, NOT everything; a mother’s sorrow over the death of her only child is something nothing or no one can heal. But, for a last few days, she was feeling different. She found something that is catching her attention and curiosity. She felt alive again.

It was early morning. She ran eagerly to the bush. She moved the leaves gently, caring not to make even a slight disturbance. She strained to see something. The time was due, she thought. She could feel a slight movement, she carefully peeped and a smile appeared on her usually cheerless face. One egg has hatched. She looked at the tiny birdie, so small and cute! Immediately, her eyes were wet. She remembered her baby’s face when he was born, and how elated she had been. She could feel her heart becoming heavy, she thought she would die that moment with a broken heart. She couldn’t bear that pain any longer. Lost in her thoughts, she didn’t notice the mother bird’s arrival, carrying food in its beak for her little one, and it was perching on a tree branch nearby, as if waiting for her to leave. She doubted whether the bird knew her pain. But the next moment, a hawk flew from nowhere, hijacked the mother bird and flew away. She stood chilled .When she came to her senses, it took only a fraction of second, for her to take the little birdie together with the nest and walk to the nearby vet. Her one and only goal was to save the little birdie, because she was a mother !