You are here: Home / Family / The Rusty Cage 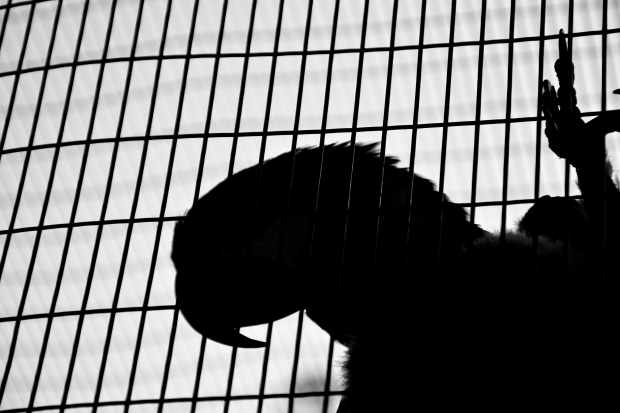 Just five more minutes, Sharmila Screamed while frantically trying to fit into her ripped jeans. She Squeezed her slender legs into the fabric and checked herself in the mirror. Her abdomen looked inflated slightly. Perhaps she had gained some weights. She felt annoyed with this realisation and promised herself to hit the Gym from the very next day.

She opened her make-up box and brushed li’l soft shades of powder in her face. Then she hurriedly painted the mascara into her eyelids. She could still hear the car’s horn honking outside. I’m coming, she shouted disgusted and more angrier now. Five minutes is all I wanted, she grumbled.

She looked at the reflection in the mirror. There reflected a beautiful figure in front of her. Sharmila, someone screamed near her right ear. She shrieked in terror.

Utchas ki ajei suti rakchas kukurni. Tero baje ko sarkari jagir cha k ? ( Will you wake up or still sleep bitch ? Or do your grandfather have a government job ? ) . Sharmila knew who this ruthless voice belong to. Her step-mother never missed an opportunity to humiliate her.

Sharmila watched the eagle hovered majestically upon the blue sky as she lousily moved her toothbrush upside down between her teeth. The liquid paste tasted sweet and she felt temptted to swallow the waste but decided against it. Today was beautiful , she thought as she remembered the dream.

She heard her Step-mother roared from inside their attached kitchen. She could see black smoke rise out of the small window. She knew her Step-mother had failed in making the fire like everyday. In truth, she was never really good at anything. All she did was shout and curse her all day long.

Tero bao le ni malai khanu aati sakyo, abo to pani mero khoon chus , ( Your father has nearly gnawed my body and now you suck the blood out of me too) her Step-mother hissed as Sharmila entered inside the kitchen.

Will the dream ever come true, she asked herself as she blew the fire. The dry cut pieces caught fire quickly. Or will those dreams just disappear like these smokes, she wondered.

Aafno logne lai chorera “Maita-ghar” ma basne kasto aaime hola ? Alachini, ( What kind of a women are you who lives in her parents home after abandoning her man ? Cursed women) her Step-mother jibed loudly. Sharmila had been married at the age of 17 against her wishes. And as fate turned out , her man turned out to be an alcoholic. He would beat her up every night. She would bear it all silently. But one winter night he tried to strangle her to death. Finally she returned home only after six months into her failed marriage.

Come to Delhi. It’s a nice place. You can get a good job out here. You’ll earn preety good. The best of all, you will lead a comfortable life, her friend had suggested her during their last conversation.

She would have gone away, had she not cared about her poor paralyzed father who sat in his rusted wheelchair. He could neither speak nor move even a bit. He depended on Sharmila for everything. Once she was gone, there would be none to look after him. He would probably starve to death, Sharmila mourned.

You should marry again, her friend Reena had told her the other afternoon as they were returning home after collecting firewoods. You are young and beautiful. Many Men would be eagered to take you as their wife, she had teased her. That Ramesh, The souji’s (The richest man in their village) son, I had heard is crazy about you. You should consider eloping, she had been bold enough to express her opinion. But was a second marriage possible ? She knew the answer all along crystal clear.

Khana pakaochas ki moi pakayera khilam timeru “Bao-Chori” lai ? ( Will you prepare food or do I need to cook for you and your father ? ) . Her step mother shouted while applying the mustard oil in her already greying hair. She ran her fingers through her hair and picked up a lice. She held it between her thumbnails and Snapped the life out of the small creature.