You are here: Home / Family / The Story That Never Was 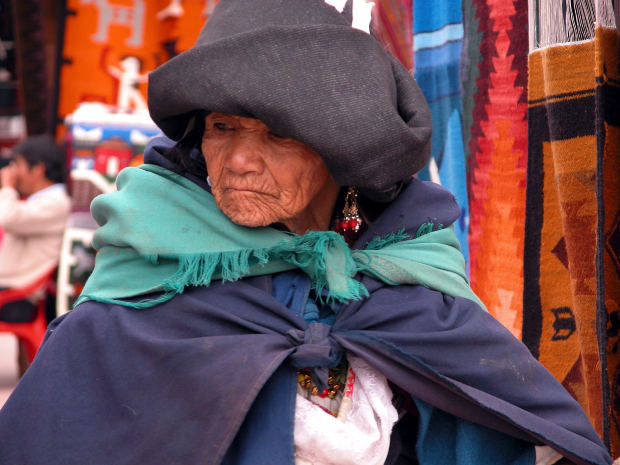 family Short Story – The Story That Never Was
Photo credit: clarita from morguefile.com
(Note: Image does not illustrate or has any resemblance with characters depicted in the story)

Kuppu was sweeping the kitchen and looking at me through the corner of her eyes. I was in the drawing room at my computer typing furiously. The biography was at the brink of a fair, interesting ending, about the self made man.

“Baby!” kuppu called me by my pet name. She had been in my house even before they thought of giving me my name, why, even before I was born. She looked an ageless creature, hooked to the kitchen, smelling of sweat and onions, a presence in the house which was rather not felt by the inmates, just as we do not perceive the presence of the floor under our feet till we step on something sticky or prickly. She was garrulous, but did not wait for anyone to speak back. My mother was not the talkative type. She spent most of her time in the puja room after my father had passed away.

No, I don’t need coffee,” I told her. we always knew that when she called one of us, it was for a coffee or for eating.

“No Baby, it is not for coffee that I called you.” She put the broom in a corner behind the door, wiped her hands on her sari and came near me. There was a peculiar look in her eyes which I could not fathom.

“Look, Kuppu, I am very busy now. How much do you want?” I questioned her without taking my eyes off the screen.

“Look! As if I would ask money from my Baby. Your mother gives me enough. Why don’t you write a story about me? Me as heroine?”

I turned and looked at her incredulously, then threw my head back and laughed aloud.

“Is that what you want?”

“Yes, of course. Why not?” She questioned defiantly. “I heard you write real stories about real people.”

“Yes, I shall think about it,” I said at last, just to get the conversation over to get back to my story.

I thought it was over with that. But the next day she was right there at my elbow asking me to write about her. Was she growing senile? Must be.

Mother had told me she was over seventy, a couple of years older than her. The next few days I became so busy in interviewing the powerful industrialist, whose story I was ghost writing. I knew the book would take months to complete. Kuppu had gone to the bottom of my memory.

That day I was late and mother was standing at the door anxiously, as usual. She always complained why I did not choose a profession that normal girls preferred. “I’m abnormal”, I had assured her.

“Why are you so nervous? It’s only eight,” I was getting irritated.

“No Baby. It’s not that. Kuppu is in the ICU. Tried reaching you, but your phone was switched off. It is a heart attack. I took the neighbour’s help to admit her.” I remembered the time when my father had heart attack and how Kuppu took charge of the situation. Somehow Kuppu having a heart attack seemed unbelievable.

From that day home seemed so different and a tough place to live in. Mother had problems in her joints and could not do much of house work. After we hired a cook, a number of expensive things went missing. She was fired and we tried buying food. Nothing seemed to restore order in the house.

Kuppu came out of ICU and in about a fortnight she took over her routine. Of course we had to buy the various tablets, prescribed by the doctor, for her.  The doctor had observed that they were even considering a by-pass. Though we felt a bit guilty about letting her do the work, she shrugged cheerfully and said, “What am I good for, if not cooking? Shall I write stories?” she laughed. “And that reminds me, are you writing my story or not, Baby?”

I grinned sheepishly but decided that I should do something for her, and that was how I came to write Kuppu’s story.

She was busy grinding the dosa dough when I started my interview. “Kuppu, tell me about your parents, your birth and your childhood. Why were you named Kuppu.”

“My parents? How I got my name,- do you need it for the story? My mother used to cook in that double storey house. My father had run away, she told me.” Can I call the master of the house, father? Those children are calling him father. Or shall I call the watchman, father? This drove her mad.

” I will kill you,” yelled my mother, though I could not understand why she got wild and it became fun for me to tease her by asking the same questions again and again.” Kuppu laughed her heart out.

“Tell me about your youth, your love…”.

” Love?” she became thoughtful. “Yes, I did want to marry, live in a house with my husband, my children… but it doesn’t matter. You and Giddu are my children (Giddu , my elder brother in US). You know, I was lucky to come here. Your mother was struggling with a new born, with no one to help her. Both her parents and in laws were no more, you see. And then in a few years you were born, so beautiful, flowerlike.”

“That’s my story, Kuppu,” I interrupted. Try as I might, I could not bring out a story of her life.

“There is nothing at all I can write about you, Kuppu”, I complained. “Write about my Pongal, keerai vadai my…..”

“But then it will become a cook book.”

“See, I have written,” I showed her. She stared at the letters and said,” But only this much to write? Nothing at all?”

“Yes, Kuppu. you don’t have a story. But without you we also might not have had one”, I said and meant it.