You are here: Home / Editor's Choice / Something Significant 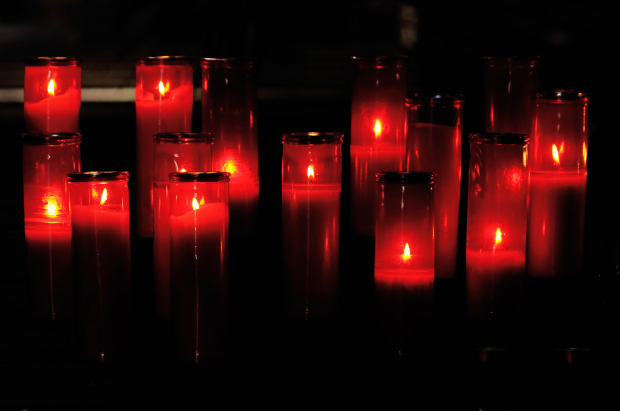 I am not a particularly religious person. But nothing iconoclastic.  Just that I believe in the omnipresence force that drives life and exists within everything. More strong in some places or in some people than others.  So you can imagine that I attend all the religious ceremonies to experience their  grandeur and mystic appeal rather than to ensure a seat in heaven.

Ironic I might say, but it was exactly during one such pooja that quite a revelation of my life dawned upon me. So much that it made me chuckle at my perspicacity of life.

I vividly recall the holy fire burning red hot under the intense chanting of the local priest at my friend Raj’s place. It was as if the fire was channelling some elemental force and the priest relentlessly chanting mantras as if in a desperate attempt to turn the forces in his favour or so it would seem .

At this point first let me mention something. Our brain renders a certain innate attribute of pushing all the less prioritised event occurring around us into the background of our mind. What we connect with or notice are only those stuffs that  we give prime importance to. Like when we are talking to one of our friend standing in a mall, all that is happening around us for example the number of people passing by or some nearby conversations , we do not notice even though our brain is completely aware of it.

So that day during the pooja all was hazy for me . The chants were like some distant sound, entirely incoherent; the rituals in some fast forward process that I am certain I will be unable to recall. I only noticed the blazing holy fire, its flame random yet so steady. It was inducing a sensation of reassuring calmness.

It was amidst that dense stillness that I was floating within, I suddenly recognised the dialect of the priest.  He was asking something. “The name of your father , Son “ he said. My friend Raj answered “Sri Baldeo Prasad”, as he added some ghee the fire making it spark and crackle.

“The name of your grandfather, Son”, the priest continued to ask. Like a student confident with the last moment revision before the exam, Raj promptly replied “Sri Randeep Prasad”.

But the grand holy viva had just begun. The priest asked again “The name of your great-grandfather, Son”. At this moment, thousands of vision in my mind reeled like some unedited unfinished movie trailer. They were all in flashes .The dish I had the night before. The name of the last magazine I read. The novel I recently finished. Name of the director of the movie I watched last weekend. My school uniform. The old house in my village. The colourful cover page of the story book my grandma used to read me out as a kid .The innocent faces of the distant cousins I haven’t met since a decade or more. I must have rummaged my entire memory lane or atleast everything that I could recall . The names of my great grandfather…err… what??

I started recalling the name of my maternal grandparents. My Mom’s father had died long before I could ever meet him. So what did they used to call him…. Grandpa??

C’mon! That’s what everybody called him isn’t it ?

I was living one of those moments when a remarkable but rather conspicuous truth dawns upon you.

Okay. So I am a voracious reader. I adore movies, art , music. I could name the previous couple of years Oscar winners. I follow the people winning Pulitzer on twitter. I make a point to acquaint myself with the current political scenarios. I ardently follow the editorial of Times of India. Hell I even recall the very first artists to win an EGOT.

When I drew back from reverie, I realised the priest was already on the  names of  6th-7th generation. And Raj replied . Easily. Naturally. Like these were some facts their family discussed daily during brunch.

The scene of some heavily moustached  jamindars  proudly boasting about his dynasty in those Hindi movies of 70’s -80’s flashed before my eyes.

That day when I returned  home , I immediately called upon my grandma ( Srimati Rangalata Choudhury ) and asked her to iterate the names of my great grandparents , her great grandparents  and maternal  grandparents and their ancestors. I ended up creating something like a family tree.

Once done, I realised that maybe this knowledge might not come by that necessary. And not as fascinating as study of Mughal Empire either. But knowing all these, just even the names filled a gap. I was certainly always aware of presence of my ancestors, but now I noticed it.