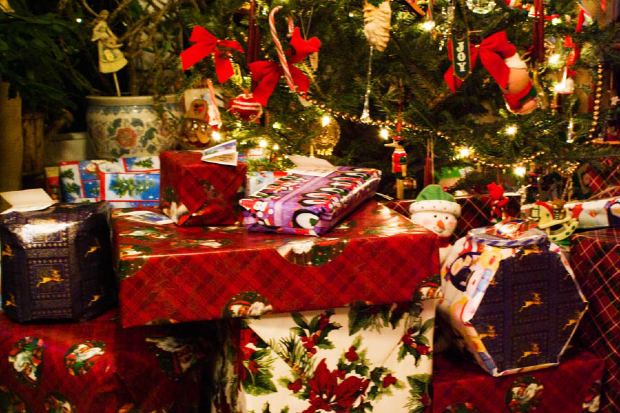 Christmas was close so several new tasks appeared in John Kowalski’s everyday schedule. The Christmas Eve in 2081 was expected a kind of ordinary one which meant pretty much work for all members of the family, even though it was still the whole week before the holidays.

Despite the fact that for recent seventy years the world had completely changed, John did his best to provide a traditional dish for the Christmas Eve every year. This time he was preparing bigos according to his grandmother’s recipe. It contained mostly cabbage with meat, sausage, and spices.

He had already finished frying sausage and bacon. Strong, pleasant aroma was still in the air in the whole flat. John added chopped cabbage, trying it before.

“I think next time I’ll try a different internet grocery.” thought he. “Even though they are pretty close so delivering the shopping takes less than half an hour this cabbage is not too tasty.”

When the water with vegetables was boiling John took his mobile, visit the grocery’s website, and gave pretty low rating to the store. Then he moved the mobile close to his right arm. The device communicated with chip implanted in his hand to confirm John’s identity. This technical innovation made all marks of the customers one hundred per cent reliable.

John put his mobile in the pocket and returned to kitchen activities. He knew that after after the bigos was ready, it could wait for the Christmas Eve in a freezer. Reheated, it was even better…

John’s son Victor was at school now. In fact this meant he was in a neighboring room, his room, because the classical education had been replaced with e-learning over twenty years ago. Victor was sitting at his desk and looking down on a computer, a kind of modern laptop. It looked like a sheet of plastic foil, pretty thick for a foil, but extremely thin for a computer. It had quite a big screen, or rather it was a big touch screen, very elastic so that it could be folded and put in a briefcase or a backpack. The only inflexible part of the device was in the top left corner, and was used to connect a power supply and some peripherals, however most of devices communicated with the computer in a wireless way.

Smell of cooking travelled from the kitchen through the hall and sneaked into Victor’s room under the closed door. Quickly it reached his nose.

“Yep! Daddy is cooking, Christmas is near!” thought he.

The chip mounted in student’s head registered brain activity connected with the sense of smell and producing saliva in his mouth. Combination of these two was allowed by the regulations. If the chip registered activity of his taste receptors, he would be given a rebuke. Students were not allowed to eat during classes.

The current lesson was history. Victor was watching a video which showed the first part of events of the last fifty years. The global government took special care that every student learned about its steps which led the humanity to peace over the whole planet. Establishing the global government was a long-term effect of the world crisis which began before 2010 and could not be stopped. Soon the crisis grew stronger as the resources of oil ran out, and had to be replaced with electricity from a huge power plant on Sahara desert. The global government took the control over the plant…

If any student didn’t catch all the information from the video, he could always use a website
https://yourstoryclub.com/short-stories-social-moral/short-story-science-fiction-total-globalization/, where all the knowledge was presented in writing. However, such classic web pages without videos and containing a lot of text were obsolete and occurred rarely on the modern internet.

Soon the lesson was over. It was the last history classes before holidays. In new year 2082 Victor would learn how the government ordered to implant electronic chips onto people’s arms or heads in order to gather information about their emotions. These human units who had too much anger or aggression received help, and the worst cases were imprisoned before they could do anything harmful to the society. Thus, due to the total control of the global society’s feelings the whole world could experience the peace, perfect and everlasting. Wars were known only from history books. The economy was under full control so another crisis was impossible as well. Despite several seamless flaws like people who still had to be in prisons, the world was almost perfect.

Victor had a break before the next classes so he visited his Facebook account to check out what happened among his friends and in his kin recently. He also wanted to send some early Christmas wishes.

When he was tapping his virtual keyboard on his touch panel he could feel only the hard board of the desk underneath. The computer was really thin.

He received and the message from the government. Christmas wishes were not the same for every citizen, but were tailored to his needs, preferences, and feelings. Information gathered from chips and from community portals, including Facebook ‘likes’, allowed the government to create a psychological portrait of every human being.

Meanwhile Veronica, Victor’s mother, returned from work. She was a geologist. It was one of few jobs which could not be done remotely. Most of the society worked in their homes. Recently she was exploring some caverns in the south. John welcomed her in the hall. He noticed that something was wrong.

“Honey, what happened?” he asked and hugged her. He felt his wife was shaking.

“Sensitive and empathic as usual.” he thought with a kind of satisfaction that he could give support to his wife. It made him feel more a man. Besides, the delicate scent of her perfumes was a good alternative for the smell of fried meat and cooked cabbage.

For a minute they were celebrating the mutual tenderness and when Veronica satisfied her need for warm emotions, she gently released from the hug and moved back from her husband.

She took a sheet of paper from the pocket of her coat.

“When we were exploring one grotto, I have found this.”

She gave the paper to John. As he touched it, he noticed the paper was a little moist, probably after lying in the grotto for pretty long time. He looked at it and skimmed through the text. It was a handwriting. Some letters were faded, but still the whole text could be read easily. He didn’t finish reading when his wife said:

“It’s just unbelievable. It is a fragment of a diary of some resistance fighter. He wrote that our global government is in fact the Beast from the Book of Revelation, and that we all serve to no one else than satan himself. Maybe the fact that the global government has exactly six hundred and sixty six members is not a coincidence. And… all this chipping, this spying on the internet and through mobiles which was intended to keep the world peace and security… Is it not used to control us?”

Her voice was gradually getting louder until she spoke the last word. John was listening to his wife and thinking.

“Honey, it is strange but… I’m afraid that we can do nothing with it.” he answered finally. “Besides… this is a journal of some outlaw, and it shows his very subjective point of view. Maybe things are not as bad as they seem…”

Veronica calmed down and sat on a chair.

“Indeed, our freedom is limited.” continued John. “Especially if we compare our situation with our great grandparents… even with grandparents, but we don’t have bad conditions. Soon Christmas is coming and we will spend pleasant time with our family. I’ve already bought presents on eBay for your parents and your sister. The gifts are coming today or tomorrow, but still we need to clean the whole flat. There is pretty much to do, so we can return to the discussion about this fragment of the diary during the holidays. Just please don’t let your emotions go too far. Otherwise we could have an unexpected visit…”

Suddenly a doorbell interrupted John’s words, but everything had already been told anyway. John opened the door. Fortunately it was a courier instead of the police. He delivered presents bought on eBay for Veronica’s family. John showed his arm to the courier. The delivery boy entered the price on a scanner and pointed it at John’s chip. The scanner beeped quickly and the bank transfer with the payment was on its way to the seller.

Veronica was standing behind her husband, thinking about their talk. John’s speech made sense and she understood there was no other way than to follow his advice. What else could they do? They would not join the resistance, because they had a teen son and had to take care of his future.

However, for Veronica and probably for John as well the upcoming Christmas lost its feeling of security. Every holiday and also every ordinary day was not supposed to be as it used to be before.

PS. If you want to read the page of the journal found by Veronica, you can find it on https://yourstoryclub.com/short-stories-science-fiction/short-story-science-fiction-freedom-fighter-of-tomorrow/
I have re-written it especially for you. However, please don’t ask me how I have obtained a fragment of a diary from the future. I won’t tell you. :)
PS2. You can find the recipe for bigos from the first paragraph on https://www.food.com/recipe/polish-bigos-hunters-stew-84136