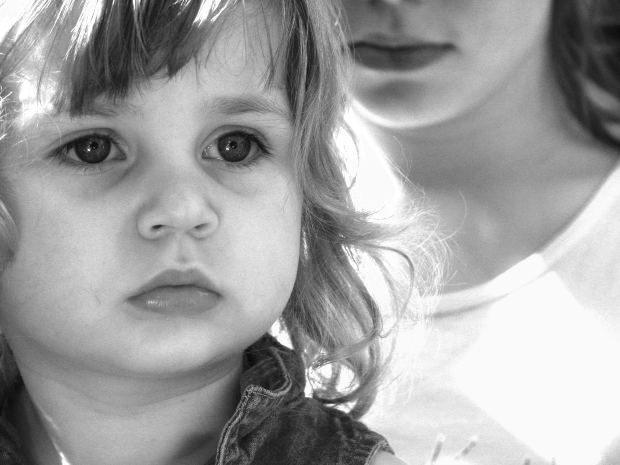 She was watching the crowd in the station. There was still time for her train to come.  She found a place to sit. Pranav was hitting an imaginary ball with an imaginary bat nearby.

“Pranav, come here,” she pulled him to her and got him seated near her.

“Ma, when will the train come?” He had asked more than a hundred times.

All on a sudden she heard the ring of her cell phone. She searched for it in the various partitions of her handbag. It was her brother Ravi.

“Ma, the train has come. We’ll get into it, soon. Otherwise it will leave us,” Pranav pulled her kurta.

In the din of people scurrying toward their respective coaches and the blaring horn, she could not make out what Ravi was saying. “Train has arrived. I’m not able to hear you,” she said.

“Don’t board. Mother is not well, had chest pain, and I admitted her in Green Peace hospital just now. They say she’s in a critical stage as it’s a heart attack. I’m sending the car. Stay where you are. You have a lot of luggage. Shaju will come and pick you up.”

“I can’t understand. What happened?” she heard herself almost screeching into the phone.

“Ma, Ma,” Pranav was pulling her madly. She gave a sharp smack on his back and he started crying.

“Don’t worry, Mahi. Mom will be alright,” Ravi said in a hollow voice. He had not come to the station for a send off as he had some urgent work. That was a blessing. otherwise how could he have admitted mother in the hospital, had he been with her in the station? She sat and hugged Pranav. He sobbed and she felt a tremour pass through her. She too sobbed silently. Pranav looked up.

“Grandma isn’t well, Pranav. we are not going now.”

“Daddy will be waiting for us!” he said.

” Yes, but I shall call him up and tell him now,” so saying she dialled. She was startled to see that she had dialled her mother’s number instead of Anand’s! A habit of eight long years.

Her mother had bought her the cell phone and had gifted it eight years back.

“Your brother has bought me one,” her mother smiled,”we can talk from anywhere. Take it.”

Even when Mahi’s husband Anand offered to buy Mahi a new one recently, she refused, not wanting to part with her mother’s gift.

At least once in a day Mahi had been calling her mother, these eight years.

“Ma, I felt giddy and couldn’t cook anything. Anand said that he would eat out. I don’t feel like eating anything. I don’t know what’s wrong with me. But I’m not running a temperature.”

“Mahi, consult a gynecologist, immediately. It may be that you are carrying!”

“Ma, Pranav seems to have temperature. He’s not drinking milk. ”

“Is he having indigestion? Or cold?”

“He sneezed a couple of times and his nostrils are wet.”

“He surely has a cold. Give him warm water and take him to a doctor.”

“Ma, today being the first day in school, Pranav cried a lot. I was not allowed to stay there. It’s painful, ma.”

“You were even worse when you first went to school. You never let go of my saree. The had to drag you in. In a week you were alright.”

“Ma, Anand has been promoted to DGM level.”

“I know, my sweetheart. He is very intelligent and hard working. He’ll climb higher, no doubt.”

“Takes after his mother of course! You had always been a tigress in sports.”

Whom would she call if something happened to her Ma?

She was too emotionally dependent on her mother. She still could not believe her ma was ill. May be she had fallen asleep in the train and was dreaming all this. The train had started, leaving them in the station. She dialled Anand.

” Anand, you need not come to the station.” She heard Anand’s deep voice replying,”Why, is your bro coming with you?”

“No, Anand,” she heard her voice cracking,” Mother is not well,..heart attack… hospitalised. Ravi is sending the car and ….driver is coming to pick us up,” She could not talk any more.

“Why, what happened? Ok, I’ll call Ravi and talk to him. Don’t cry. I’ll try to be there soon. Take care and give the phone to Pranav…….Pranav, this is Papa. Don’t worry. I shall come soon. Grandma is going to be alright. Tell Mom, Ok, bye!” Anand hung up.

“Mamma, Gramma has fever?” Pranav asked forgetting the insult he suffered in her hands.

” Yes,” she agreed. She could not explain it to him.

The cell phone startled her…… a message. She read it quickly. 5% discount on something. She closed it.  Minutes seemed like hours. Why was Shaju taking such a long time? Fresh batch of crowd was thronging the station for the next arrival.

The phone again. Her hands trembled as she pressed the button. It was Anand. He had talked to Ravi. Mother was better, he said. She could only half believe it. Phone rang again. Oh, God, now what? Someone asked her whether she needed a housing loan……then a call from Pranav’s new school that he had passed the entrance test. He had an interview on 20th, that is four days hence. She started worrying whether she should ask for a different date.

And then the call came from Ravi. He queried whether Shaju had come. There was some urgency in his voice that told her everything. She did not want to ask. She could neither see nor hear anything. Only when Shaju called her thrice, and Pranav shook her, she came to her senses. She walked like a robot. The cell phone slipped and fell into a puddle of rain water. She took it up and said to herself, “I must ask Anand to buy me a new phone.”