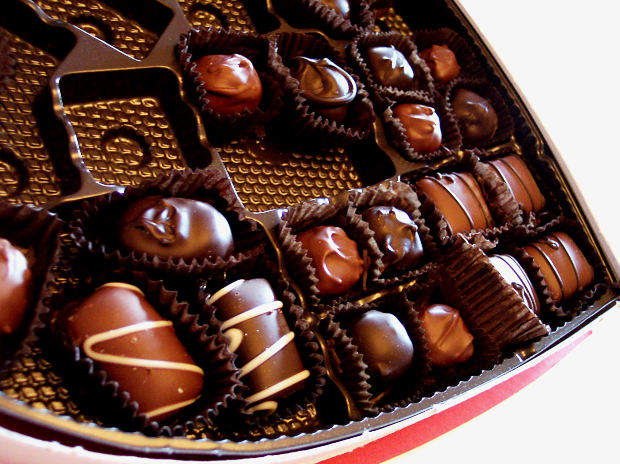 A usual morn in March, Chintu came running from school to his home. As soon as he entered his house he clung to his ma’s sari and His mom, too busy in her household chores said in an exhausted voice “Chintu, don’t disturb mom now, You see she is so busy.”

“Ma, I want to tell you something,”

“What, Chintu Please let me complete my dish and then we’ll talk.”

“Ma, you know I got first prize in inter school race.” Chintu’s bright face was gleaming with happiness when he showed his reward, “A jumbo kit full of chocolates” to Ma.”

His mom’s face now lost all its weariness and refreshed and turned genial in order to greet and encourage the extension of her heart. My son always be successful and truthful in your life and she was again busy with her dish.

“And Chintu don’t open the kit before showing your dad. He told he’ll be late today.”

In night after Chintu had finished his dinner Mr. Anand returned home too exhausted. He collapsed on the sofa in hall where Mrs. Anand served him dinner.

Chintu hurried to the living hall and presented his award before his Dad.

“Chintu has got for coming first in race in his school” Chintu’s mom said in resplendent accent.

“I’ll be leaving early tomorrow, you need not prepare breakfast. I’ll have something out and……..”

Before Anand could complete his sentence to his wife Chintu alleged “Dad, you know the day after is your birthday.”

“Day after, Day after is Friday. No way darling I have an important meeting to attend that day. There’s no birthday or festival for a working man. Chintu you have school tomorrow go to your bed.”

Next day, Anand geared up for his office and went with Chintu so that he could go to his office after dropping him to his school. Traffic was usually high. When Anand halted his car at red light Chintu curiously asked him “Dad, why you got to office?”

“I get 200 rupees for working an hour.” Anand alleged in an assertive tone to make his son feel proud for his dad.

After dropping his son to school gate Anand rode for his office.

After coming from school Chintu was too busy and he kept moving in and out of home. He was thrice scolded by his mom for being so restless.  At last, he clinched something tight in his hands and went to his bedroom and hid something very safely below his pillow.

Anand, as usual arrived late at eleven in night. As soon as Chintu heard the horn of Anand’s car he hurried out of his room. Anand sat on sofa where he was usually served his dinner.

Anand said in a surprised tone “Chintu, you haven’t slept yet.”

“Dad tomorrow is your birthday.”

“Shut up Chintu and get back straight to your bed and sleep.”

Chintu returned sadly to his room.

After completing his dinner Anand went to Chintu’s bedroom to confirm if he was asleep or not.

Chintu was lying forsaken on his bed thinking something seriously. Anand softened a bit patting on his head he asked him reason for his not sleeping. Chintu on hearing Dad’s voice brightened up.

He quickly began searching below his pillow where he had treasured something.

He said, “Dad, you told you earn two hundred rupees an hour.”

“Dad, take this two hundred rupees and please come home tomorrow an hour early. I want to have dinner with you.”

Still surprised Anand asked “From where did you get this.”

“Dad, I gave that chocolate kit to shopkeeper uncle and he gave me this.”

Anand hugged his son tightly as perhaps he had never hugged before. There were tears of remorse in his eyes.

Remember, life is game of two balls you are juggling in air – work and family. Work is rubber ball, if you drop it, it’ll bounce back again but family friends and your spirit are the balls made of glass. If you drop them they will be broken or shattered and they will never be the same again.