Sulekha’s Ghost – Story of a Family 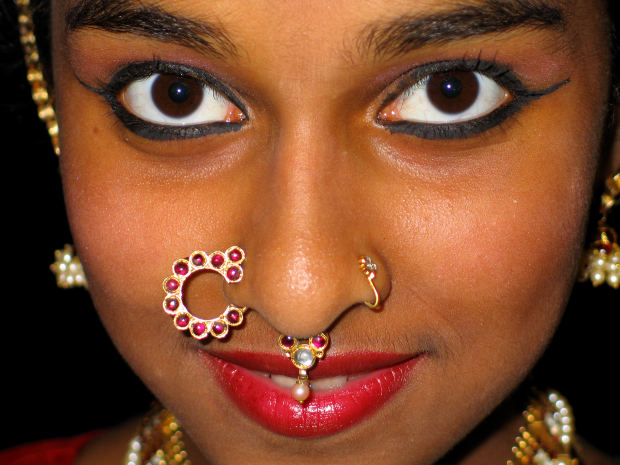 Story of a Family: Sulekha’s Ghost
(Note: Image does not illustrate or has any resemblance with characters depicted in the story)
Photo credit: priyanphoenix from morguefile.com

Rahul’s father, Pandit Ravikishan, was head master in intermediate college at Katpara village, near Kanpur district in Uttar Pradesh.  Ravikishan was a religious, humble and highly disciplined person was nicknamed as Masterji. Masterji, believe in simple living and high thinking. Apart from his regular teaching hours he used to spend quality time at home with his wife Sulekha and only son.

Masterji’s house  was mix of Kaccha and Pakka house. Kaccha house portion was made up of mud and wood that used to be cool in hot summer as there was no electricity in that village. Pakka house was having two rooms one for guest and one for rainy season as scorpion and snakes were sometime found in Kaccha house. Kitchen was in Kaccha portion. Sulekha used to burn wood for cooking.

Once fine morning, while coughing due to smoke of kitchen, Rahul’s mother vomited with blood traces. A month back Rahul has celebrated his 7th birthday. Rahul ran to next neighboring house, and called Shusheela Aunty.

Shusheela ran along with Rahul. She made Sulekha lie on bed and given some cold water to drink. Shusheela’s son ran to college, about a mile away, to approach Masterji. Masterji, immediately rush back to home and found Sulekha unconscious. He could able to arrange a Jeep of gram panchayat to take Sulekha to the Kanpur Hospital. She was diagnosed with cancer. Doctor said that its last stage and she could alive not more than another 2 months.

Masterji used to spend enough time at home and try to fulfill all the wishes whatever he could do. Sulekha started worrying about her son’s future and about Masterji’s life.

Sulekha everyday used to fight and argue with Masterji to get re- married.

“Masterji, you are just 40, Rahul is also just 7 years old, after me who is there to take care of him?” – Sulekha said.

“Don’t worry you will be alright” – Masterji said.

“I am illiterate, but not a fool. I know, I am having few more days on this earth. Get married with a nice girl” – Sulekha smiled.

“Stepmother can never replace real mother. I do not want to spoil my son’s future. I want Rahul to go for administrative services” – Masterji replied.

Sulekha started teaching Rahul whatever she could do in those 2 months. Finally, the day has come, when Sulekha left his son. His was just 7 year, 3 months old. While leaving this world, Sulekha has taken promise from Masterji to get remarried.

Masterji loved Sulekha a lot and her remembrance could not let Masterji sleep properly. Day in and day out Masterji was lost in thoughts of Sulekha.  On the other hand, Rahul was lost in her mother’s thoughts. Life of son and father both were difficult.

After couple of years of Sulekha’s death, Masterji decided to get re married. Masterji took promise from the girl that they will not have another child and Rahul will be the only child forever.

Rahul has got, Manisha, as a step mother.  Till one year of marriage, Manisha loved more than a real mother. Slowly, she started thinking to have her own child. Initially, Masterji resisted a lot. Every day, both used to fight.

Rajeev is coworker of Masterji. Rajeev suggested that everyday quarrel is not good for Rahul’s future. If Manisha will have her own child she will be busy and at least will not keep envy with Rahul. After lot of argument, finally Masterji agreed.

Rahul has got, Mukund as a brother. Rahul was very happy to have a brother and someone to play with. Manisha attitude towards Rahul’s started changing gradually. She started, to take work from Rahul, scolding on each and every small mistake. Before, Rahul could able to reply and respond he used to get a slap. Rahul was like a servant in his own house.

Rahul used to miss her mother a lot. Every night and in solitude he remembers his mother. His interested in this world has started reducing. Now, Rahul was not a kid, he was 13 years old teen. He tried to understand the purpose of life, why he is devoid of mother, why Manisha behaviors has changed, where is her mother now, can he able to talk to her mother. These questions started haunting him badly.

Rahul’s interested in school was also started reducing. While going to school, there was an old, silent, temple of Maa Kali. While coming back from school, he used to visit temple and sit and cry. Pujariji used to see the child every day. One day Pujariji said that why don’t you ask the eternal mother? She will give you all the answers to your questions.

Rahul Replied,” Will she not leave and go like my own mother?”

“No child, She is universal mother, She is eternal she will always be with you. She will always love you, no matter whatever situation comes”Pujari said

Daily worship and meditation had become the daily schedule of Rahul. When Rahul was in class 9th at the age of 15, once during meditation he started feeling peace and found that he is getting answers to all his question from inner voice. During meditation he found that his body has become still, eyes bulged out and great feeling! He is confused that was it his own voice or eternal.

Manisha’s own son Mukund was a mentally retarded, which has increased her envy.  Mukund was 7 years old; his activities were like 3 year old boy. He could not able to talk and understand properly.  Once Mukund fell down, Manisha ran to see Mukund. Rahul was standing nearby.

To punish Rahul she threw a steel bowl at him shouting “Rahul, How dare you push Mukund”

The bowl in the air changed the path and hit Mukund. While shouting she fell unconscious. Her voice has changed. Her body was stiff. She started shouting in loud voice “You cannot touch my child, Rahul”.  She body was vibrating.

Watching all these, Rahul got a bit scared.

Manisha started calling Rahul, “Rahul, I am your mom, Sulekha, Come in my arms”. Tears were running from the corners of the eyes of Manisha. Rahul was scared, slowly he went to her. Rahul felt the warmth of her mother love. Manisha was exactly placing her hand on his forehead and hairs in the same way Sulekha used to do. She hugged her like her mother used to and kissed her.

Rahul couldn’t able to understand anything; moreover he was very much scared. He ran to neighbor, Shusheela aunty. Shusheela aunty along with two more nearby ladies entered Rahul’s house.  Within half an hour the story in the village has taken a shape. Everyone says that the ghost of Sulekha has conquered Manisha.

Radhika supported, “ Yes – Yes, you seen.. the way her eyes were grown big and red. Manisha should not be so cruel toward Rahul. Rahul was just 7 years when Sulekha left her. Manisha never understood him as hes real soon.

Masterji came home and was very much tensed. Everyone in the village was asking Masterji, what happened and how it has happened. Katpara is a small village of 100 families, this news spread like fire.

Rahul was in stress and wanted to understand that is that her mother’s soul that day?  He thought that he will ask the same question while meditating the temple. After reaching temple, he got scared, what if the answer is no. He has received love from her mother so called, Shulekha’s ghost.

Something strange has happened his time. While in meditation he saw image of his mother first time changing with the image of goddess Kali. He was not sure about ghost, about his mother soul but was being sure that everything is happing by God’s will. He was becoming more and more peaceful and lucid in his thought.

Masterji has reached to Ojhaji (Tantrik who can control spirit and ghost), Ojhaji has visit masterji’s house and given a blue bead neck less to wear. Ojhaji has told that is a ghost problem this bead will automatically illuminate. In the dark night, Masterji along with Rahul could see the illuminated bead.  Ojhaji told that, that this is due to ghost of Sulekha.

Ojhaji- It will not harm Rahul, but it may harm Mukund. You just seen that bowl which was thrown to hit Rahul has finally hit Mukund.

Ojhaji – You need to do worship at no moon night.

Masterji was taking lunch and Manisha was preparing chapatti for Masterji. While Mukund was playing near kitchen, Manisha saw scorpion near feet of Mukund. Manisha shouted, “ Mukund run”  Manisha started running towards Mukund.  Fire caught her sari which she did not notice. She held Mukund in her arms, and pulled. Same time she got fit of Sulekha’s ghost. Masterji thought that Sulekha’s ghost want to kill their son Mukund with fire. Masterji had thrown bucket of water on Manisha. Manisha cried,   “Rahul, my son I love you”

This was the second incident. Many small incidents started happening. Manisha used to get fits very frequently. Once she gets fits and become unconscious after shouting or crying, he does not do any household work.  Neighborhood woman used to gossip that this is just Manisha attitude and she is pretending so that she needs not to do any work.

With all these day today life style, Rahul has complete in X+2 with 90 percent marks. Masterji wanted Rahul to study away from house. His father wanted him to complete engineering and try for administrative services. He got admission in Varanasi.  Rahul opted not to be in hostel, so he took a room on rent.  He could able to take some time for Maa Kali worship, from his daily routine. In one of the Kali temple he come across Aghori, he recognized his name and called him “Rahul”.

>> To know further“ What happened to Shusheela Ghost, Did Rahul got the answer of his question? What happened when he met Aghori’s of Varanasi please read next part.