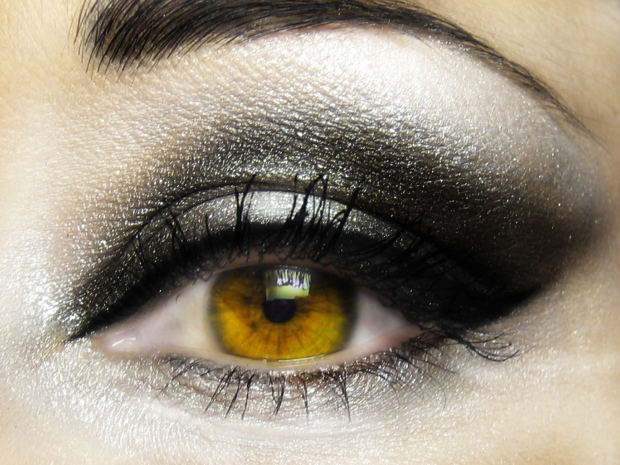 The security-guard at the gated residential complex stepped out of his box when he saw the lime-green VW approach the main gates. He nodded at the driver of the car and smiled at the lady seated in the back seat. Behind her sunglasses, Pamela Viegas smiled back. A few minutes later, she got out of the car and into the basement of her apartment building.

Stepping into the elevator, she pressed the button for her floor. Her glance fell on her reflection in the wall-mirror. A thirty-something year old, slightly over-weight person, with streaks of grey stared back. She sighed and looked away. Not for the first time, she wondered how it had gone so badly wrong for her. Not even five years ago, she had been a slim, raven-haired beauty working for a national daily. She had met her husband, Sydney when he was a junior manager at a private bank. They had married two years later. She began writing, caught a lucky break and her first novel made the Indian bestseller lists. The trouble started shortly after that visit to the doctor revealed what she had begun to suspect: that she would never be able to conceive.

She let herself into her apartment, and headed straight for the kitchen. She wanted tea badly enough to kill for it. She half-filled a kettle with water before making tracks to her bedroom to switch outfits. The kettle was steaming when she returned and she lowered a tea-bag into her favourite mug.

While the news of her infertility struck her like the proverbial bolt of lightning, the effect it had on her husband numbed her even more. Sydney became instantly distant. At first it was merely returning from work late, at times so late that even his dinners were away from home. Later, when she began to protest, he announced he was accepting a promotion – and with it, a transfer. He would not budge from that decision, and within three months, he had packed his bags and departed for Mumbai. He kept in touch infrequently, preferring to use email rather than phone, knowing her disdain for electronic media. While she had religiously utilised the help of a desk-top for her writing assignments, most of her knowledge of the Internet had come ironically enough, from Sydney.

In the first one year, he had returned home just once. She confided her concerns to her father, but the old man, simple-minded and sickly, could offer no advice to his only child. She knew her close friends would be shocked and furious at Sydney’s behaviour, so she chose to keep things to herself. When he returned after a year, she sat him down and told him she would not live like this, in a loveless union. If she had thought it would shock him into coming to his senses, she was wrong. He spent the morning in the apartment, packing more of his belongings into two big suitcases before wordlessly leaving. A week later, she sent him an email, asking for a divorce.

His one-line reply: Let me think about it. Nothing more was forthcoming, and she wrote again, explaining why she believed that divorce was the only way out. He called, telling her curtly that he was up to his neck in work and that he had no time for trivial matters like her frame of mind. He had cut the line before she could find the words to express her outrage.

This phone-call had happened a few nights back. Pam had decided to sit and think things through, not wanting to act impulsively and say or do the wrong thing. She knew that there would be no happy-ending. Whatever the reason for his actions, Pamela knew he was lost to her forever. There could be no going back to the way things were. She had to settle things once and for all, and it had to be on her terms. She got up and sat at her laptop and began her email to Sydney.

Thirty minutes later, she sat back and for the tenth time, read her letter. She nodded finally and saved the draft. It would have to do.

And now the next email, thought Pam, hunching forward, the letter she had never thought she would have to write. Pulling up the keyboard, she began to type: Lyn…
* * *
Sydney Viegas could feel his heart racing. It couldn’t be, he thought frantically, not his wife Pamela! Yet here was the proof, in front of his eyes. He stared at the computer monitor again.

Lyn,
Sydney called. You were right: he’s mocking me. He’s refused to consider my request for a divorce again. What is wrong with him? Why can’t he see the truth, that our marriage is clearly finished? I cannot keep waiting, Lyn, I do not have forever. I’m going to write him again. I have to try, for the alternative is too horrible to contemplate: If Sydney doesn’t agree this time, that will be the last straw – he will have signed his own death warrant…
Yes, Lyn, I’ve decided to take your advice: I have paid a retainer to that ex-military type you connected me with, along with a photo of Sydney. As a writer, I can afford to pay him without dipping into our accounts. I told him it to make it look like an accident. Sydney’s life is now in his hands.

It’s strange. When I met you years ago during research for my novel, I never dreamed I would one day be reaching out like this. I would have been content with my life, unhappy but not choosing to change anything. You changed all that for me. If it weren’t for you, I would never have dared to consider…

Sydney leaned back and tried to stop his hands from trembling. Who the hell was Lyn? he thought, his mind still struggling to grope with the revelations. Yes, their marriage had soured and consequently, her request for a divorce hadn’t surprised him. But he had wanted to string her along, to humiliate her as long as possible before ending it. What had shaken him was that there was another party involved and the lengths she was willing to go.

Sydney marveled, again, at his good fortune that Pam had gotten the letters mixed up when hitting the send button. The silly cow had never really understood the basics of email. And thank God for that! Forewarned was forearmed. But how to proceed now? An email was weak as evidence; it was not like it was hand-written. And even if it somehow got her behind bars, there might still be a killer on the prowl, after his blood. He shuddered.

He realised he had to call Pamela without delay. Agreeing to her demands now seemed the only solution. It was only hastening the inevitable, he reasoned to himself. He wouldn’t have wanted to keep going indefinitely. But he wanted to salvage some dignity. He would pretend he was agreeing because he had met someone.

He dialled her number. “I received your email, Pam, and I’m going to accept that a divorce is the best way forward.”

From her end, Pamela let out a sigh of relief. “I don’t know what made you re-consider, Syd-”

He cut her off curtly. “I met someone. She works at the bank.” He waited for her to say something. When she didn’t, he went on: “I’m sure you can find a lawyer to draw up the paperwork.”

“It’s already been done.” She replied quietly. “I’ll scan and email it to you. I want everything I purchased including the apartment, the car and the jewelry.” There was silence, but she hadn’t really expected him to object. “You can get in touch with your attorney, and when we’re ready to sign, you can come down from Mumbai.”

* * *
Four weeks later, the couple descended from the office, and paused at the entrance.

“So that’s it then.” said Pam. There was no triumph in her voice, nothing to betray the fact that she had won her battle. The breaking of the bond between them had given her no joy, no sense of fulfillment, but she had known that from the start. Divorce had been the only way out for her. She had accepted that, and from that point had strives to make that goal a reality. “We’re no longer husband and wife.”

Sydney shrugged. “It’s what you wanted.” He looked subdued, defeated.

“It’s what I wanted.” she agreed, willing herself not to feel sorrow for him as she noticed his expression. She had felt pity and compassion, even love for this man long ago. But now it was over. A chapter of her life had ended. “I’m going home.” He put out his hand to stop her, and she took a step back, suddenly alert.

He looked at Pamela. He had given her what she wanted. Now he had to make sure she had no ideas of revenge that involved an ex-soldier who had his photograph. “I know about Lyn.”

She stared back at him, saying nothing, her face giving away even less.

He rubbed a hand over his face. “Look, Pam, I – I read the email you sent Lyn. You sent it to my email ID by mistake. I know about your plans. And now I’m asking you-” He wet his lips. “I need to know that you’re going to keep your end of the deal.”

She nodded slowly. “I guess I owe you that much…” The smile she gave him was meant to be reassuring, but she didn’t have the heart to pull it off. “I got what I wanted. You have nothing to fear.”

His face fell. “Yes, you got what you wanted…” His lips twisted. “And you’re going home now. To Lyn? Is he waiting for you there? In our home-” His voice broke on the last word, and he turned to cover the sudden tears that rushed to his eyes.

She gazed at him, shoulders slumping at he wept. Whatever he might have done to her, this was not how she had wanted things to turn out, to see him reduced to this state. He deserved better, she knew, and in that instant she realised that before she turned and walked away forever, she would have to tell him the truth.

She shook her head slowly. “No, Sydney. You see, except in that one email that I intentionally sent you, Lyn never existed.”