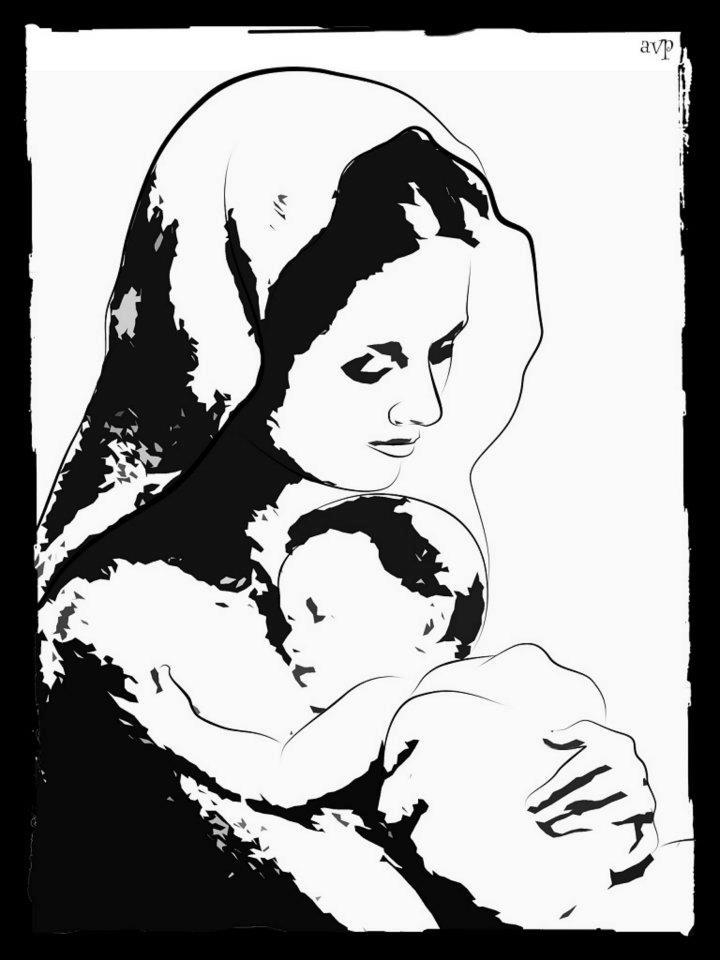 Sometimes, people think they have an idea about who they are. They are mistaken. Like the Quote I read the other day…”Who you are is a mystery no one can answer, not even you.” I don’t remember by whom it was.

In my case, I already knew that I did not have a clear idea of who I was. Because I did not know you. Nothing about you. And I was 13 already. I thought I was mature enough to hear it all out. Or that was how I justified my rapidly burning urge to imbibe you in me. The way you talk, walk, laugh, smell, sulk, get angry, dance, sip tea, love… I wanted to absorb it all into my memory. But how could I have a memory of you if I didn’t know you?

Last year, on a Saturday afternoon Daddy made me my favorite kheer. He is a great cook. You must already know that. But I wasn’t on my best behavior that weekend. I was infuriated about a lot of things. I have a short temper – One of the qualities we share. Daddy told me later. So I shouted. And tears started flowing simultaneously. My voice cracked with every word I spoke.

At this point, I want to tell you that whenever I am too angry, I let the anger flow down as hot tears down my cheeks making my eyes all red and puffy. I can’t handle too much anger. And anyone could tell that I had been crying because every time I cry, I have a red nose.

“I need to know about her! Okay?? And without your help…I don’t know how or where to start!” Daddy was right beside me, reading The Outlook. “Mmm.” Came his reply.

I kept on staring at him. My heart paining with the burden I felt. The burden of being not taken seriously by my very own father. My handsome father. Still so young with those dark brown eyes and a smile that made me feel… secure. Did you like his eyes, too? I feel you did. He is a warm man. A father I am glad to have.

I held his left hand. He understood my touch more than he understood my words I suppose because he replied keeping his hand on my head, “After all she is your mum, right? You have the right to know about her beta”

I hugged him. Finally… I get to know about my mother. My mum. My Father’s best friend. And a wonderful woman to know.

I was so overwhelmed by the intensity of the moment. Do you know how much I have missed you, even if I haven’t met you since fourteen years? And I never will. I know you must miss me too. Of course you must. I sat holding Daddy’s hand tight. Like the way when we used to cross the road when I was younger. I tried to calm myself down. And then Daddy smiled his smile. I knew it was all going to be okay at once.

Daddy told me he saw you for the very first time at your house when he had come with his parents to ask your hand for marriage. He told me it was not love at first sight. And the feeling was mutual for both of you. I was not happy to know this, but it made me all the more curious. I am an impatient and curious child, mum.

He told me you were wearing a peacock blue saree with a red border. I love blue, I tell Daddy. He smiles. Your hair was neatly plaited. The first thing he noticed about you was that you were a tall woman. Only two inches shorter than himself.

Afterwards, you both were left alone to spend some time together. He was expecting you to show him your room. But you led him to the terrace. Your favorite place in the house.

For a long time you both stood. Silent. Clueless. Facing the September wind. And when the silence was making it all too weird, you , my confident mother, told him you liked his shirt, without directly facing him. For a moment, daddy thought he was mistaken. He looked down to see which shirt exactly he was wearing. It was his white shirt. Sleeves folded till the elbows. Could you have just complimented him? Just like that?

And when he wasn’t replying, you faced him and asked him about his favorite part of the day. “Late afternoon, sunset” he said.

“Mmm.” She replied, “me too.” And you both exchanged smiles.

After that you talked about a lot of things like you were best of friends. You, the more excited and enthusiastic one. He, the calm, silent one. More of a listener. Afterwards you left. None of you agreed to marry the other. None of you disagreed either. Your parents decided to not pop in the question of marriage sometime soon and give you time to decide.

Cellphones were not common those days. And Daddy did not want to call on the landline. But he wanted to meet you. So he went to the college where you taught Political Science. You were not surprised to know he had come, as if you already knew he eventually would come to see you. You too were looking forward to meet him. He seemed a good man to you.

After your class ended, you came to meet him where he was sitting. At a bench in the playground.

“hi”, you noticed he was wearing the very same white shirt. Was it intentional? You thought so.

You smiled and said, “Next class starts in two hours. Lets go.”

He took you to the museum. I had rolled my eyes when Daddy told me this. Museum?? Seriously?? Couldn’t he think of any other place to take you on your first date?? He laughed.

But you didn’t complain. You didn’t feel the need to. You enjoyed it there. Mostly because he was a nice guy. You knew it. His eyes reflected it all. Were you beginning to like him…? May be.

“I wanted to meet you. Sorry to disturb you in your work hours.” Daddy told you, glancing at you.

“Feeling is mutual.” You replied.

You had half an hour left of free time. So you suggested you should grab lunch. You went to South Point for lunch.

At lunch, you ate silently. Daddy kept on stealing glances at you. And you were aware of that.

“Would we make a good couple?” You asked Daddy.

Again. He was once again taken aback by your straight forwardness.

“I think so too.” You told, still eating, your eyes still on your food.

That was the first time that Daddy noticed that you were a beautiful woman. Your face glowing with an innocence, he never knew existed. Your long,black hair, like soft clouds, yet to pour down to earth. Your big black eyes, looking forward to everything life had to offer. Your confidence, in your walk, your words, making him nervous all the time. Your replies that made him smile. The way you caught his shirt and not his hand, when crossing the road. And the way you look at him, like you know him better than himself.

“I think I would like to marry you.” He said, making you look up from your plate.

“I am not a good cook. And I am a short tempered girl. Woman.”

“I am scared of taking the lifts and my dream is to travel the world.”

“Both. I suppose”, you narrow your eyes.

You were really happy that day. He was so honest. Not like the boys who rejected you for being taller than them or being a working lady, or being too straight forward, or having a dusty complexion. He never even questioned those things.

Daddy says..it just felt right to imagine his life with you. You were a wonderful woman. Unlike any he had known. You were confident, witty, and yet did not let your innocence be overshadowed by norms and responsibilities and society and knowledge. And he could cook. What if you couldn’t? he respected that you respected yourself for who you are. And that’s exactly what you liked about him too. Such an accepting man. With respect for himself and you.

Next month, you were married. I can imagine you looking stunning in all the red and little jewellery. Your skin shining golden…more from your overwhelming warmth than the afternoon sunlight.

Confident yet shy you were, mum. So much unaware of your beauty, of the things that made Daddy fall for you.

He was such a good husband to have, you thought lying down, moving your hands through his hair, while he slept peacefully holding you, lazy from love making. Seven months after marriage and your love and respect for him had only multiplied.

A year later when I would be born, you wouldn’t be here anymore. You chose to leave me and daddy alone? I feel guilty that I was the one to bring you so much pain. And death. Doctors told there had been too much internal bleeding. But at least you held me in your arms before you left mum. I am glad you touched me mum. That you left something of you in me.

You cried so much, not pitying your fate but that you would be leaving me and Daddy. You knew that Daddy would be all alone on those nights when others would be celebrating for trivial and numerous reasons. Anniversaries. Valentines Day. First Dates. Birthdays. Diwali. Christmas. And he would lock himself up in his study, engrossing himself with work. And crying like a baby, hugging the pillow which would still smell of you ,only when I was asleep. That I would not have the chance to feel like a mother’s daughter. That you wouldn’t see me growing up into a woman…see my dreams turn into reality or sit by me like daddy does..when I am down with fever.

I look at Daddy. I think I see a tear. I hug him. Its okay…I say..he has me. I have him. He holds me dearly. Of course beta. He says. He hasn’t changed mum. He still loves you. I see it. He is so much like you. Or at least he tries to be. My daddy.

“Why not talk about her until now?” I ask him.

“I love you Daddy”

“Feeling is mutual.” He says. And we both laugh. Sometimes he sounds like you.

Are you here, mum? Have you always been here? I know you have. I can feel it in the wind. In my father’s touch. In the late afternoon’s warmth and fading sunlight. In my heart..i know.

Oh yes. The quote I told you about earlier in the letter…I read it in a book by Jamaica Kincaid. Its called…”The Autobiography of My Mother.”  J