You are here: Home / Childhood and Kids / Diwali Lighting 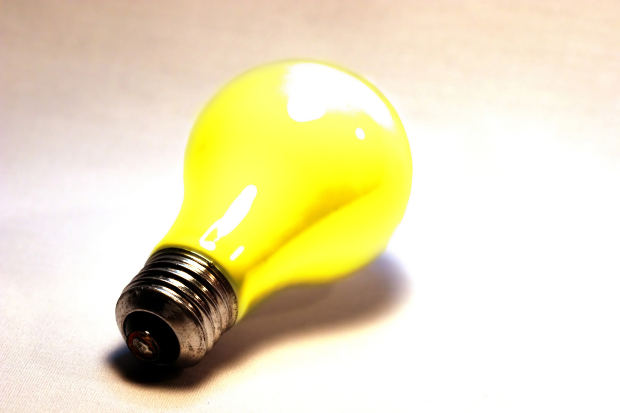 Once the company in which Swapnil used to serve, made a huge profit. As a result of this their boss decided to give a bit more bonus to all the employees this time. But when he was deciding on the extra amount he is going to give to each individual, he found that to give a fair amount to each, it is costing him so much, that he has to spend from his own pocket. So he decided, rather than giving to all, he would give to few a fairly high amount in which they would become happy. But what about the rest? How could he explain or choose few among all and still keep the rest not getting paid the extra, happy?

Thinking for the whole night he arrived at a decision. Next morning he came to the office and announced of the huge profit that their company made and that his will to pay few as a reward. How would he going to decide on which few to be rewarded is that since Diwali is nearing and so every employee needs to decorate his cubicle with lighting, and the best three would be rewarded.

Swapnil was always known for his wit. He immediately jumped up from his seat to this and continued, “Sir, why cubicle, you know if this is the excellent contest that we are going to participate in and a prize also is of such a fair amount, why the performance so common. Why not lets all jump into making some really good unusual thing. Now as you said lighting, then why our cubicle? Where we would only buy lights and we would only decorate. Where we need to make some contribution to buy lights to win that prize money, why not contribute some more and let the prize money be given on how best we can spend. Also how good would we engineers have decorating artistic mind. Lets take help of professionals and there put some of our plans to make better. You know I mean the usual decorators to decorate our house rather than cubicles with lighting. This is how our house at least for once would be fully lighted on Diwali day, as you know Sir, this is also a custom we have.”

To this the boss inquired, “And how am I going to judge? Its not at all possible for me to visit on the day of Diwali to each employee’s house to decide on the best. And also I know hearing the prize money noone would even ever dare to think to not to participate.”

Swapnil told, “I know boss, its not possible for you to visit all the houses, but could you not sit and see the snaps and that too the next day of Diwali once when we join back. Like this we need not even come to office on Diwali day, you know we do indeed have a lot of stuffs to do on the puja day. Yes what I mean is the employees would decorate their house and take snaps after that and would bring to the office the next day. Based on that you could judge on who should be rewarded.”

The boss nodded to this with a Yes and went back to his glass room. Everyone was overjoyed and was ready to go.
Swapnil immediately made a call to the best decorator and said,

“Boss there’s a huge work for you guys. I know you would be busy, but still don’t miss this opportunity. There’s a huge prize money involved in this of which I would pay you 50% in extra other than your decorating charge. You need to come to my house on Diwali day but at evening just when the sun sets. And also don’t forget to bring your catalogue.”

So as spoken the decorators arrived at Swapnil’s house on Diwali day at around 6 PM and showed him their catalogue. Swapnil asked which is the best one according to them. They showed him one and said the cost for that. Swapnil saw that was really awesome and immediately gave them the contract to decorate as per that. It was a bit dark, but still remembering the amount they are going to get paid with, they just completed their decorating without uttering a single word.

Immediately after they completed, Swapnil put on the lights and told them that he wants to view the beauty and capture it in his camera. He took some quick snaps from all directions and then putting his lower lip on his top, and nodding continued, “Boss I feel this is the best but still not that attractive. When a huge prize money is concerned, then why not we would go for the most attractive one. In this the lights don’t have a uniqueness. I feel in comparison to this, though the cost would be less, go for the second best. It is much more brighter and attractive. See the snaps. Its completely blur in the pictures.”

Then pointing to the workers he said, “Hey guys hold on.” and then turning towards his phone he continued, “What!! you mean my best friend Sunil? He met with an accident? I cant believe this. I am leaving immediately.”

He immediately disconnected the phone and turning to the workers he said, “Sorry boss. Please excuse me. No more lighting. The judge you know met with an accident. O, you people have opened also by this time. Good. But only thing he had to put in some effort for decorating the first time. But anyway, please cooperate with me in my sad times. You really decorate well and I would call you to decorate in future as well for any occasion in my house. For today thank you. So do you want something for first time effort?”

Seeing his sorrow the workers told, “No sir. All these decorations are for happiness. But now we really pray for your friend. Moreover currently there is no lighting on your walls also. So we don’t want anything.”

Swapnil was rewarded with the first prize money of 50,000 rupees the next day.