You are here: Home / Childhood and Kids / Helmets while driving two wheelers are must 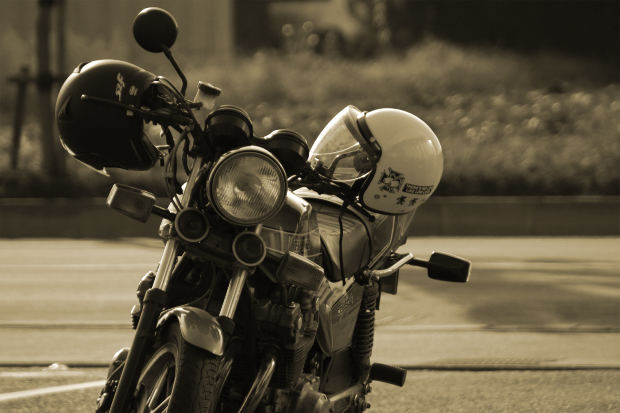 It was one Sunday evening when Swapnil was sitting in the tea shop and taking small sips of tea from his cup and was chatting with the shopkeeper. He was almost done with his tea and was about to leave after the payment when suddenly he got one call in his cell. He took out his cell from his trouser’s pocket and found Ravi, one of his friend, was calling. He thought that he should better take the call staying inside the shop only, as he dislikes talking in phone while travelling on road. So he again took one seat in one of the benches lying there and connected the call.

From the other side Ravi spoke, “Hey Swapnil, hope you are doing good and not busy now. Just wanted one trick from you urgently. Should I go ahead?”

Ravi said, “Swapnil today in the evening, I needed to visit one of my relatives house and I am on the way towards that only. I have taken my bike. But suddenly I realised that in a hurry I forgot to carry my helmet. Now I have come a long way and also good that I have realised this before getting any traffic till now. Now it would be tough for me to again return and take the helmet and then start again as I am also in a hurry. At the same time I am also scared, that I might be fined for this if any sergeant at any traffic gets to see me. So please could you give me a solution for this?”

Swapnil stood up and said, “Boss, perhaps this would have been something else then as you know, I might have surely helped you as have been usually doing. But this time though I could, but wont give any tricks as this is a life risk for you. I cant see anyone going towards danger and still I give him tricks to save his other things than life. I would suggest, how much time it takes, come back home, take your helmet and then go again, even if you get late. Or if you have money, buy one helmet there only and wear it and then go. Tricks could be applied to save everything but not life.”

Ravi a bit tensed said, “Hey Swapnil, I understand. You are absolutely correct. I know this would be risk for me. But please try to understand. I dont forget usually. I know life might not give any chance, but still for one day give me a solution. I am really really in a hurry. Also I promise I would drive slow and safe. Also if I had had money I would surely have bought one new helmet inspite of the fact that I already have one. But then again to buy the helmet also I need to cross a couple of traffics where only I might be caught by a sergeant. So please….”

Swapnil then said, “I dont know what hurry you have, nor do I know whether I am pushing you towards a danger or not by telling this trick to you, as without this trick, you might not have had travelled itself any further and have forcefully come back to take your helmet and then go. But anyway, please drive slow and safe and once you return please give me a call to let me know that you are safe.”

Swapnil said, “Ok, but now in acting you need to show that you are not safe. I mean the first traffic you see next from where you are currently standing, even if the signal is green, just stop your bike a bit far away from the sergeant room there, so that they dont see you riding a bike without a helmet. Then you stop your bike’s engine and get down from the bike. Just push the bike and you walk till sergeant’s room with it. After reaching there call one sergeant and tell him, “Sir, my bike has not broken down. But I am just pushing it because of a small problem. I went to one my relative’s house. When I left from there I had my helmet on my head riding the bike. But at one turning, I met with a small accident with a cycle coming in wrong way. Also unfortunately he was not hurt, but I was unable to keep any balance fell down with the bike. I was also not hurt, but while I was falling the full pressure was on my helmet. As a result it became loose and came out of my head. And there also it dint end. After coming out of my head, it rolled and fell in a pond, that was there just at the side where this small accident took place. It drowned also.

Now I dont have much money also to buy a new one and also if I had had to go to shop I needed to cross many traffics and any sergeant could have caught me red handed for this crime of driving two wheeler without my helmet on. So now to go back again to my relative’s house and ask money from them, I dont like. But now that since I am going back to my home only, I promise that after reaching there, I would immediately take some money and again go out without my bike to get one new helmet. I promise I would drive slow the whole way. So please could you write me a note and sign your name and phone number on it, so that at every traffic I would be stopped to enquire, I could show that note and get rid of the sergeants for the time being for just one day. Please…”. Hope this would work out. Also while returning use a separate route as you have told you are returning home from relative’s house and not going to relative’s house.”

At night 10 PM Ravi called up Swapnil once again. Swapnil was waiting for his phone only. Swapnil connected and without letting Ravi tell anything, asked, “Hey are you fine? Are you safe?”

Ravi told, “No Swapnil, today only I was not left free. I am so unlucky. I met with a dangerous accident, with a cycle and died. Ha ha ha!!! No yaar, I am safe. Also I understand your tension is logical, justified. I really have taken risk. Actually I really had no other option. I thank you very much. Your trick worked. I was not stopped in almost all the traffics, but just in one. I showed them that note and I was left, after being told to drive slow and safe. Also I promise I wont repeat this anymore time Swapnil. And even if I repeat, then though I would be knowing the trick you have told me, I would try to get back home from where only I realise, take my helmet and then travel again from start, how much late I get. Now dont worry and go to sleep and have sweet dreams. Cya, take care.”