You are here: Home / Childhood and Kids / RAJA DEFEATS ROGER 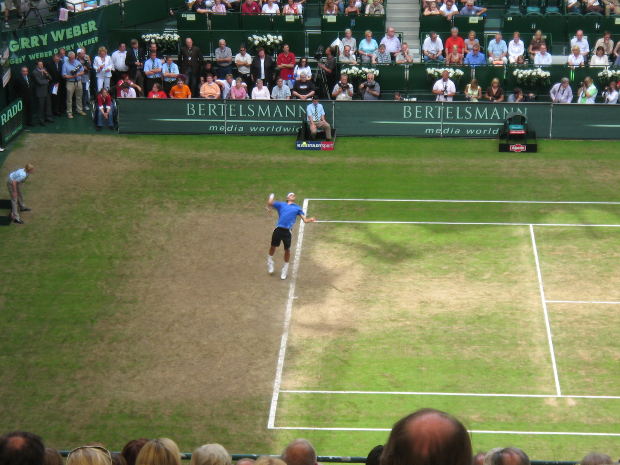 Raja had just celebrated his 12th birthday when he “watched” the Wimbledon singles final between Roger Federer and Andy Murray on the TV along with his older brother Krishna. He felt happy that his favorite, Federer, had won and exclaimed to his brother, “Wow! No one can compare with this guy!”

Raja enjoyed the match so much that even after the match ended and Krishna left, he sat there recalling the entire match. He decided he would write a nice letter to Federer, complimenting him on his game and inviting him to visit his home at Kadubeesanahalli.

“Dear Roger,  Thanks to you and to Andy for treating the world to some fine tennis. I too play tennis, but my game is different from yours. I was born without vision, but thanks to my wonderful parents and brother, I live almost like everyone else. I attend the same school as my brother. How I wish I can get to play a set with you! It would be an honour to play host to you in my city.”

Surprise of surprises, Federer acknowledged the letter and promised to visit Raja for a game at Kadubeesanahalli. Even more surprising, Federer actually came to Raja’s home a few months later.

After a preliminary chat with Raja and his family Federer asked,

“Raja, I was very impressed to learn that despite not being able to see, you can play tennis. How do you manage it?”

“My parents have built a special court for me at the back of this house; I will soon take you there. It is smaller than the courts you play on and the lines are drawn with strings and tape. We use a net which is at a slightly lower height.”

“Do you use the same tennis balls and rackets as we do?”

“No, Roger, the balls are specially designed for us. The inner core is a plastic ball within which one or more small bells are contained. The plastic casing is then wrapped tightly with foam. When we play with such a ball, the bounce is limited and the ball makes a jingling sound when hit or when it falls on the ground. It is the jingle that tells me where the ball is. Even the racket is differently designed. It is a junior size racket, but the head, the hitting area, is quite big. This is because detection of the position of the ball on the basis of the jingle is somewhat approximate. We are permitted three bounces.”

“Amazing! I would like to play with your type of racket and ball. Tell me, how do you watch the game on TV?”

“My brother helps me in this. He has designed a hand-held model of the court with plywood and he guides my right index finger on it to follow the ball’s movement.”

Federer was speechless at this innovative way of enabling a visually challenged person watch a match on TV. Just then Raja’s mother came in with breakfast. It was an interesting culinary voyage for Federer, with mouth-watering ‘dosas’, ‘uppittu’ and ‘badam halwa’. Topping it all was a steaming cup of Kodagu filter coffee. When Raja’s mother tried to persuade Federer to eat more, he politely declined, saying

“Thanks, Mom, but I have a big match coming up, you know!”

Both Raja and Roger got into their tennis attire and went out to the court at the back of the house.

Federer said, “Raja, I want to play on level terms. I would also like to sense the ball just by its sound.”

“Oh Roger! What a good sport you are! How will you do it?”

“No problem. I will just lower my bandana to cover my eyes. It is quite wide and thick and shuts out light completely.”

They practiced a bit to enable the now-blinded Federer to get a feel of   the court and the ball. Federer was ready in fifteen minutes and the match started. Krishna was the chair umpire and Raja’s parents, the line umpires.

Despite the newness of this type of tennis, Federer played well, matching Raja shot for shot. However, he lost the match, with the score line reading 0-6 and 4-6.

Raja was pleased immensely. “Thanks, Roger. I hope you did not lose the match, just to make me happy.”

“Oh no! Such a thought never even entered my head.” They laughed heartily.

Someone pushed Raja hard. Federer disappeared instantly and Krishna stood in his place. Raja woke up from his slumber in front of the TV!