You are here: Home / Childhood and Kids / The Autobiography of a Dictionary 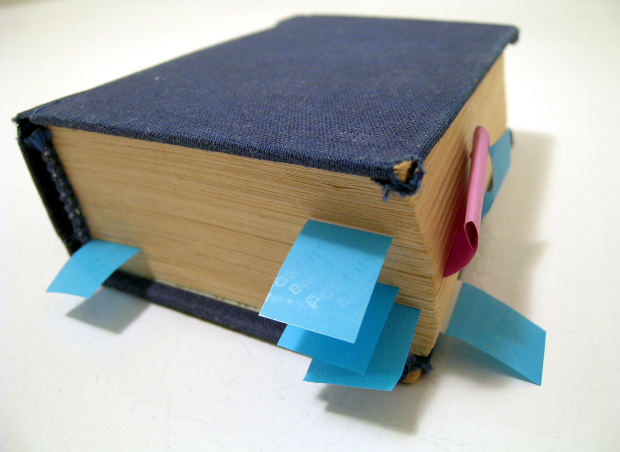 The Autobiography of a Dictionary
Photo credit: jeltovski from morguefile.com

Story: (n) an account of invented or imagined events, etc.

It was his 11th birthday. I was to be his present.

I am the first copy of the new edition. Between the hardcover bindings, my pages hide words that have been lost for countless years, and some that have been newly formed. I am the bridge between old and new. I am the biggest book of words ever printed in one copy. I am a dictionary of the 22nd century.

Unique: (adj) Unlike anything else; being the only one of its type.

Little did I know, people don’t usually get along, as you’d hoped.

On his birthday, wrapped in the shiny paper I was handed to him. The paper was hastily torn off to reveal my hardbound cover. The words read there

I greeted him well. My hardbound back made sure I don’t slouch. I met his eyes head on. He opened me up, rifled through a few of my pages and ended up tossing me aside.

“What do I do with a Dictionary? I could just say the word and my device would tell me the meaning of it, pronto. Why go around looking in a dictionary, when my devices can simply tell me?!” the child yelled.

His words sent a feeling down my spine. What word was it?

I was the first copy of a new series. I was hardbound with a plethora of words that no one has heard of before. With me at his side, he could take over the world.

But he did not want me.

Because I could not actually talk.

I hid myself among the lose shiny paper of his other gifts. They had apples on them. God had forbidden them, as the story goes. And here they were, still leading mankind to doom.

My would-be First Reader played with his toys and new devices. Each one had a voice. Each one spoke back to him.

‘I have a voice, it’s written on these pages,’ I wanted to yell at him. But I could not. I kept quiet, finding the right word for the moment.

Patience: (n) (with sb/sth) The ability to accept delay, annoyance or suffering without complaining.

My First Reader, had shelved me at the top most layer on the little book shelf in the living room. He had used a ladder to get up there, hastily placing me at the edge as if happy to be rid of my presence.

Time went by. I lay up there, forgotten.

After a year had gone by, I heard my First Reader’s parents.

“You be a good boy, now. Lock all the doors at night. And call Aunty Linda if you need anything. Her number is on all the devices.”

“Yes, mom,” said the boy, eager for the conversation to be over.

I could sense the impatience in his voice. That feeling had become all too familiar.

Once his parents left, he plopped himself on the couch and yelled as if he was the master of the house, “Play Game.”

And it did. Lines and shapes flickered on the wall in front of me. I knew what it was. There was an old word for this.

Video game: (n) A game played using a home computer, etc in which the player controls images on a television screen.

Some kids will never change.

I sat where I was, counting the dust motes in the sunlit air near me. Slowly as the day went by, even the light disappeared.

The boy had turned his gaming device off and gone to sleep.

The night had come.

In the silence of the night, there was a sudden noise in the living room. I tried to look around in the dark, but I could see nothing. I could just hear a sound come in rhythm. What was it called again?

Could it be the First Reader? In the darkness I saw a faint silhouette.

It was not the boy, it was someone else. Someone bigger. Who could it be? There was no one else in the house. The word suddenly came to me.

Thief: (n) pl thieves: a person who steals, esp secretly and without violence.

I tried to shout out. But of course, I wasn’t meant to. I only hoped and prayed the boy would come.

The devices could not talk either as the thief disconnected them and put them in his bag. So much for their talking ability, for all the good it did that night.

One by one they disappeared into the thief’s bag.

Then, I heard another set of footsteps. Were my prayers answered or did the boy know his precious devices were being stolen? I will never know; but he was there.

From my vantage point, I looked down upon the scene. I now wished he was back in his bed and safe. What chance did a 12 year old have with a fully grown thief? The answer I found within myself.

In the faint light, the boy saw the thief steal his devices. He rushed at him. But the thief had heard the boy and was taking out his gun. He fired, but the boy was too close to him. He missed.

The reverberation of the shot shook me.

The man and the boy struggled, in a tangle of limbs. The thief pushed the boy out of his way. He fell straight into the bookshelf I sat on. The entire bookshelf wobbled and I was dislodged from the place I rested and tumbled down.

As I fell, I felt a tingling sensation down my spine like never before. I even had the perfect word to describe it.

I fell straight onto the torso of my First Reader.

Another shot fired; the proximity of the shot deafened me. But then I felt something worse. A piercing pain spread through my hardcover, all the way to the spine.

My First Reader was unconscious. I was fading too. But we were both alive.

Unable to see me in the dark, the thief took the devices and ran. My First Reader was unconscious. He could not have prevented the theft, anyway.

Since that day, life changed for me. I did not patiently sit at the top of the bookshelf. I sat in the centre of it. As a place of honour, I take it.

Sometimes, my First Reader—who is growing up to be quite the intelligent young man—takes me down and pours over my words. All the while, his finger run in and out of the bullet hole in my hardcover. It feels…what’s the word…the wound has made me a little slow…

Content: (adj) with sth: feeling satisfaction with what one has; not wanting more; happy.

The loss of the devices were a blessing. My First Reader and I spent a lot of time together, learning and growing each day. His feelings for me grew to such an extent, after saving his life, the only word I feel that describes it is

Ineffable: (adj) too great to be described in words.

And here my story, of my transformation from a dictionary to a saviour, ends. I doubt any of his talking devices could ever have claimed the same. But then again, all they could do was talk. None of them were hardbound.

End: (n) the final part of a story, an event, an activity, a period of time, etc; the finish; the conclusion.