You are here: Home / Childhood and Kids / The Deer with a Green Tail 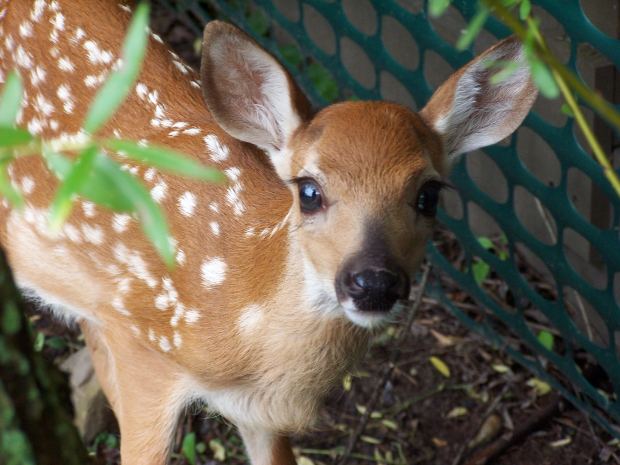 Children Story with Moral – The Deer with a Green Tail
Photo credit: trooney from morguefile.com

Raju and his parents lived in a place known as Raniban, a small forest in the remote part of Sikkim. His father, a farmer, used to work in the fields and his mother looked after household chores. Raju was twelve years old and his sister Anshika was eight years old. Raju loved his sister very dearly. Raniban was a dense forest teeming with a large variety of trees and shrubs. There were lots of flowering trees and fruit bearing trees and berries in the forest. Whenever Raju went to collect firewood in the forest, he always used to bring fruits and berries for his sister.

One day, while collecting firewood and berries, Raju went deep inside the forest. He felt very thirsty, so he started searching for some springs. Very soon, he found a spring underneath a big banyan tree and started drinking water. When he turned to leave after quenching his thirst, he heard a faint bleating. It sounded like a sheep bleating desperately. The sound came from a bush behind the banyan tree. For a moment, Raju was afraid. He thought it could be a big boa devouring a goat or sheep. But he grew curious. He decided to take a peek from a distance and inched towards the bush. He carefully brushed aside the leaves and took a peep. He saw a deer, trapped in hunter’s snare. It was desperately trying to get free. Suddenly the deer looked towards Raju. Raju got frightened and started to run away.

‘Please help me!’, Raju heard a human voice. He turned to see who it was. ‘Help me’, he heard again and the sound came from where the deer was. He peeked from the same bush and was surprised to find that it was the deer speaking in human voice. The deer said ‘Please set me free from this trap and I will show you a place where you will find lots of fruits, berries and firewood too’. Raju was still afraid. Sensing his fear, the deer said ‘Don’t be afraid, child, I will not harm you, I promise!’. Raju thought about his sister and he felt very happy that he would be able to give her lots of fruits and berries. He walked towards the deer and cut the trap with his knife and set the deer free. As the deer stood up from the ground, Raju noticed that the tail of the deer was green! Raju was very surprised. He had never seen deer with a green tail.

‘How come you have a green tail?’, asked surprised Raju.

‘It is a long story’, the deer replied.

‘I want to know, please tell me, and how can you speak in human language?’, Raju insisted.

‘I have many secrets to tell you, but it is already late. You go home and come tomorrow with your sister, I will tell you the story’, said the deer.

‘Why should I bring my sister along? And how do you know that I have a sister?’, asked Raju in disbelief.

‘I have been living in the forest since long and I know everything. I want your sister to know the story too.’, replied the deer.

‘OK’, said Raju. The deer guided Raju to the place where he had kept his firewood bundle and fruits. The deer said, ‘I can’t go any further than this. I will wait for you here tomorrow’, and then the deer vanished into the dense forest and the undergrowth.

‘Why did you take so long?’, Raju’s mom said giving him a bowl of rice pudding. Raju did not say anything. He was afraid that if he told his mother about the deer, she would not allow him to go to the forest again. After he had finished eating, he woke up his sister and gave her fruits. When his mother went outside, he narrated the entire story to his little sister. She also promised to go with him to the forest tomorrow.

The next day after eating breakfast, Raju got ready to go to the forest for collecting firewood. He asked his mother if Anshika could also go along with him. His mother rejected. Raju insisted and promised her that he would not take his sister deep into the forest. After repeated request by him and his sister, she allowed Anshika to go on the condition that they should be back before late afternoon and they should only go up to the forest fringe, not deeper into the forest. The brother and sister happily agreed and started towards the forest. Raju carried a small knife called Khukuri that was tailor made for him by the blacksmith of his village and Anshika carried a small, closely woven bamboo bag for collecting fruits and berries. When they reached the spot where the deer had vanished yesterday, the deer appeared from the dense bush. Anshika was very surprised to notice the green tail.

‘Now take me to the part of the forest where there are lots of fruits, berries and firewood as you promised yesterday’, demanded Raju.

‘I will, follow me’, said the deer and started walking deeper into the forest, with Raju and his sister following behind it. They went deeper in to the forest. Finally, the deer stopped. Raju and his sister looked around and could not believe their eyes. There were plenty of fruits and berries. A spring with clean water was flowing nearby. There was a cosy burrow in the bush.

‘Now I will tell you who I am’, said the deer. Anshika had already plucked some fruits and was eating one. She was also interested to know about the green tail. Both Raju and Anshika sat on the ground. The deer started:

‘But only your tail is green’, interrupted Anshika.

‘Yes, it is a very sad story’, continued the deer.

We were happy representing the parts of the earth. We often sat together and felt very proud of the purity of the parts that we represented. But over the time, as the population of human grew, their greed grew too. Soon, they started cutting down the trees indiscriminately. Then they started industries and started polluting both air and water.

‘But we must fell trees to meet our needs and I see no wrong with that’, said Raju.

‘Yes, that’s true’, said the deer. ‘You can fell trees to meet your needs but not your greed! You can’t go on felling trees indiscriminately. You should plant trees too to replenish it. Otherwise, trees will soon be depleted beyond replenishment.’ The deer continued:

Anshika became sad. ‘Why did the eagle die?’, she asked the deer.

‘Because what the eagle represented, that is, the air and soil had been so polluted that it killed the eagle.’, replied the deer. ‘Today, the air is so polluted that maximum airborne diseases such as lung cancer and asthama are directly caused by it’, said the deer. The deer went on ‘Soil has become dependent on chemical fertilizers. Human have failed to maintain the balance!’, said the deer sadly.

‘What about the tortoise?’, asked Raju.

‘Does that mean that water is also very polluted and cannot support aquatic life?’, asked Raju.

‘I am the only one surviving, representing the forest. But you can see, I am also about to die. All the colour of my body has vanished except my tail. Once the green colour from my tail disappears, I will also die’. The eyes of the deer welled up.

‘What?’, exclaimed Anshika and hugged the deer dearly. ‘You cannot die. We will not let you die!’, she cried.

‘And the day I die will be the day mankind will suffer’, the deer said.

The deer continued ‘I will die on the day when the forest will be reduced beyond replenishment. I represent the last hope for the mankind.’

‘If we increase forest cover, will that help soil, air and water too?’ asked Raju, excited.

‘Yes, of course!’, said the deer. ‘Trees purify the air by filtering out dust and other solid pollutants. They absorb carbon dioxide, the major air pollutants and give out oxygen, in a process called Photosynthesis.’

‘OK, but how do forest purify water?’ asked Raju.

‘Trees purify water in many ways. Forest filters the water that comes from precipitation, through a process called Water Cycle. This water is impure. When this water passes through forest, they get filtered and purified. This clean water later end up into rivers, then into seas and then oceans.’ said the deer.

‘But alas, only my tail has been left. I will die soon! Saving forest is the only hope for saving the earth and the mankind’, said the deer sadly. Anshika started weeping. Raju became disturbed.

‘I promise I will never cut a tree’, said Raju with teary eyes.

‘I also promise not to cut trees. Dear deer, now you will not die’, cried Anshika still hugging the deer.

The dear looked at both of them and said, ‘No, my dear children! You cannot save me. The forest and me can only be saved when each and every person pledges to protect the forest, which have been destroyed beyond imagination! Thank you for your promise, I hope you two will spread this message to everybody you meet’.

The deer looked at its tail. Anshika and Raju also looked at the tail and to their horror, they noticed that the colour of the tailed had vanished more. The green colour remained only on the tip of the tail. The deer grew sad and said, ‘You see, how fast the forest is depleting. I had lost all my faith, but seeing you two, my faith is revived. I hope you will not let me die.’

Saying so, the deer slowly started walking towards the dense forest. It stopped, turned to the children and said, ‘I hope we will be able to meet next time. Take care and don’t forget your pledges.’ and the deer vanished into the forest.

Raju could not hold up his tears. Anshika started wailing, but in their tears were the burning pledge of protecting forest and spreading this message.