You are here: Home / Childhood and Kids / The First Time I was Admitted to a Hospital 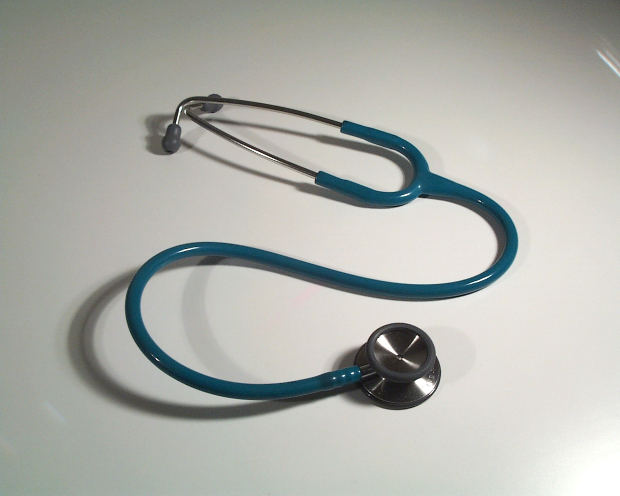 Funny Kids Short Story – The First Time I was Admitted to a Hospital
Photo credit: mconnors from morguefile.com

I was 9 years old when this happened. It was a cold December  night. It’s been several years. But I still remember that night vividly.

I was lying on my bed shivering in my night clothes, covered in thick blankets. I had been running a fever for 5 days. My mom was continually checking my temperature. The clock struck 12. My mum checked my temperature again. The digital meter showed a temperature of 103.7 degree Fahrenheit. She woke my dad up and told him-

“He has to be taken to the hospital. The temperature’s not dipping and he’s shivering”.

My dad made some calls and soon I found myself in an ambulance- a Maruti Omni with several modifications in the back. However, I refused to sleep in the back of the ambulance. Instead, I sat on the stretcher throughout the 5-mile long drive to the hospital. The journey was bone-shattering to me and I was feeling sick as I got out.

As I reached the hospital, I looked up at the giant sign illuminated by halogen lamps that read ‘CARE HOSPITAL’. Judging by the name, I believed I was in safe hands. How soon would I find out that it was the contrary… I was finally on a stretcher and I was wheeled into the ‘ICU’. Judging by the smell of chemicals, I felt I was in a sterile environment.

As I took in my surroundings, I found that I was shivering. I looked up and saw an air-conditioner and an air blower. I called for help and I had to take the pains to explain to the nurses that I was in the wrong room and that I simply had fever. As they understood, they took me to another ward and shifted me onto a nice, comfy bed. As the nurses began their customary ‘chart-filling’, I had to give them my name and had to submit to yet another thermometer which they stuck in my mouth. All the time, I was cursing the hospital for their poor patient-management.

The chief doctor finally came into my room and took stock of my medical condition. He spoke kindly to me, seeing that I was a kid. He then asked a junior doctor to administer an ‘IV drip’ to me, which I later came to know stood for ‘Intravenous drip’. The doctor approached me and tried to stick the catheter needle in my arm. I yelled,  jerked my hand immediately, jumped out of my bed and ran into the corridor. I was tiny and so, I could slip through three doctors and 2 nurses to reach the exit.

It was only after an hour or so, the nurses found me and brought me back inside my room.I was drained of all my energy because of the ‘bolting’ in spite of my fever. I couldn’t help but submit to the doctor, who then proceeded onto sticking a needle in my arm. I heard the chief doc telling his colleagues faintly “Put him on antibiotics and a mild sedative”. I found that all my drugs were administered through a catheter in my arm. Surprisingly, I didn’t find any pain.

As I woke up the next morning, I was subjected to all the routines of the hospital once again, along with a battery of ‘blood-draining’ tests. They discovered that I had multiple diseases ‘malaria’ and ‘typhoid’ leading to intermittent bouts of fever. I was given a cocktail of drugs everyday, some of which gave me nausea.

But, I put on with the hospital- routines and drugs , only due to the constant persuasion of my mum, to be completely cured by the 11th day of my stay there. As the doctors gave me a final check-up and gave their consent for discharge, I felt as if I had sprouted wings and wanted to fly home. On that day, I promised myself  ‘I won’t be coming back here again’. As I went home, I binged on lots of dishes my mum made for me.

It has been several years since this happened. Yet, I will always remember every moment of  ‘the first time I was admitted to a hospital’ and will always take my lessons from it.