You are here: Home / Childhood and Kids / Have you heard of stone in mango? 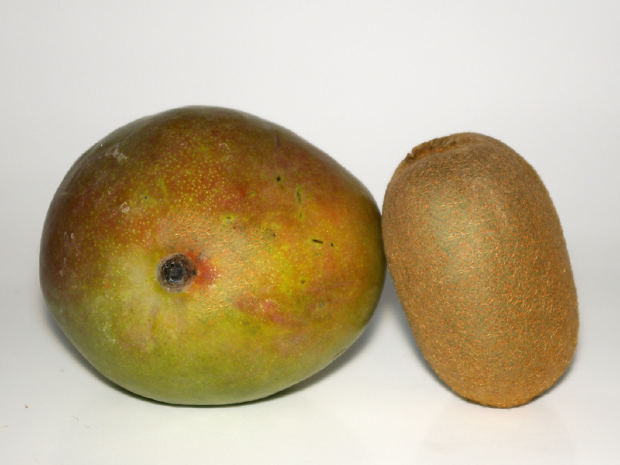 Have you heard of stone in mango?

Have you heard of stone in mango?

These 2 sisters (Elderly) are very fond of mangoes and jackfruits ,unluckily during this year jack fruits are in plenty, but no mangoes, no flowering did take place on mango trees in their compound. So for them this was disheartening.

Yet they made certain that whoever approached them for a jackfruit gave two, neighbours were very happy over this gesture. Days went by, there were no signs of reciprocity from neighbours by offering one or two mangoes, after all jackfruits are bigger in size but sisters lamented on the one sided approach of neighbours.

Younger one takes pride in possessing a unique mango tree on the southern side of compound which bears fruits with appearance of few buds not much to the notice of public; fruit all the more bigger in size with a honey like taste. Few months back having seen no sign of fructification decided to perform appeasing ceremony, which started in a fine morning –perambulated the favourite mango tree 3 times after affixing chandan on the trunk and prayed standing there, by calling names of known Gods & Goddesses for only to give few fruits and not many ,as excess creates many headaches like arrangement for correct plucking and distribution etc.or where else could they go? One dear uncle had the mango trees cut in his compound nearby simply saying that the same were tasteless and small, other relatives migrated . Another option was go to Kangangad or Neeleshwaram ,but that incurred high expenditure ,so dropped it and decided to pray here to mother earth ; they were sure that their prayer would be heard. After all they had been distributing mangoes and jackfruits to all free. Why nature can’t be benevolent! so started chanting mantras morning and evening and younger one watered the tree for few days. While the elder one watched the rituals from verandah , dreamed for a share of this delicious fruits.

Days passed by , one day younger one while standing beneath the tree on a windy evening ,when looked up casually saw twigs swaying, and took it for granted for having agreed to bear fruits , so thanked the tree.

Jack fruits and mangoes’s season is coming to an end. Not having a chance to taste mangoes of their favourite tree was still disturbing their mind. While taking beat on the verandah ,both took interest to watch the mango tree and prayed for favour of fruits.

One night elder one heard younger one shouting for stones for pelting down the fruits from the trees as done in her twenties. Elder one was quite astonished if the same was to aim her due to any hidden grudge? yet woke up younger one, to remind to sleep well.

One evening while gathering tulsi and few flowers for puja suddenly younger one heard whistling of bird from the tree nearby, curiously looked up ,saw to her surprise few mangoes hanging. The immediate flash on her face was caught by elder one and verified if there were good mangoes on the trees ,how many,size etc.both took the name of Gods &Goddesses and thanked them profusely. The tree was watered , kept murmuring on the trunk for wholesome and tasty fruits, gradually fruits matured into bigger size. Normally infestation reduced the quantity available for eating, this time they got only 2 numbers, which very dearly kept wrapped for ripening.

After 4 days, both inspected the fruits and decided to enjoy the fruit next day; as the younger one was not feeling well. But the elder one could not resist tasting and had it on the same evening.

Next day younger one sharpened a selected knife and cleaned it, prayed for sometime, cut open the fruit to see honey tasting good pulp. 4 pcs were made ,one temporarily set aside for daughter at Dilli, one for bhoomi devi and 2 pcs for self. A guest appeared and out of 2 ,one pc was given to him , when heard good comments felt honoured for having made successful efforts. She exclaimed the wonderful gift of nature and asked elder one if she could also get a tastier and good one. Elder one complained of a stone like thing while eating and could not much relish – after a pause she casually laughed . Younger one spotted a missing tooth and pitied loudly, elder one ran in front of mirror only to realize, the stone like thing in the mango!