You are here: Home / Childhood and Kids / Isha, Russi Doll and Other Toys -Short Story for Kids

Isha was very happy. It was her birthday. Her Dad presented her a beautiful Russian doll. Isha liked the doll very much. She named her “Russi Babe”. When Isha went to bed, she did not leave Russi Babe with other toys. She kept her in lap and slept. 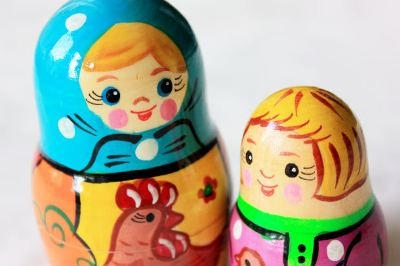 In night, when Mom, Dad, Isha and Isha’s younger brother Ani slept, the toys started talking to each other. Old Die Hexe from Herz told in German, “I always bless Isha with my magical power.” Russi Babe replied, “See yourself. You look so ugly. Your clothes are dirty and patched.” Die Hexe was hurt but did not say anything.

Next night Isha again kept Russi Babe in her lap. When everyone in house slept, Thomas the train engine from Switzerland told, “I always played with Isha. I go around many times on same small routes for her.” Russi Babe replied, “See yourself. You are as black as coal. Your face looks like broken plate”. Thomas the train engine was hurt but did not say anything. Every night one by one all toys — Dr. Tete from States, Balloo Bear from Siberia, small puppy Moti from Malaysia and others — told how they used to play with Isha but Russi Babe hurt all of them by making their fun.

One day when Isha went to school, Ani, Isha’s younger brother, took Russi Babe to play. He was too small to take care of delicate Russi Babe. While playing, Russi Babe fell in rose bushes in garden where Mom was watering the plants. Russi Babe was totally covered with mud. Her beautiful clothes were torn in bush. Her blonde hair was tangled among thorns. She was no more looking beautiful. Ani took her and threw in toys’ basket with other toys. That night Isha did not keep Russi Babe with her.

When everyone in house slept, Russi Babe started crying in pain. Her skin was cut by rose prickles. Moreover she was very hurt because Isha did not even look at her. Die Hexe came to Russi Babe. She took out a beautiful dress for Russi Babe out of her ragged and patched bag. Thomas the train engine whistled and called Dr. Tete from States. Dr. Tete put ointment on Russi Babe skin. She felt better. Thomas also carried Balloo Bear from Siberia. Die Hexe took Balloo’s hairs and weaved beautiful silver hairs for Russi Babe. Then it was turn for small puppy Moti from Malaysia to help Russi Babe. Moti licked and cleaned away all dirt from Russi Babe.

Next day when the family got up, Isha found Russi Babe even prettier. Russi Babe told Isha how other toys helped her. That day was Sunday and Isha played whole day with Russi Babe and other toys. All toys were very happy as Russi Babe was very friendly with them. In night when Isha was taking Russi Babe to bed in her lap, Russi Babe told Isha, “I am your favourite toy, but yesterday you did not even look at me. Other toys who I always hurt by making fun of them took my good care when I needed. Now I would like to be with them in night”. Isha realized her mistake. She said sorry to other toys and then onwards was equally friendly with all the toys.