You are here: Home / Childhood and Kids / Probability 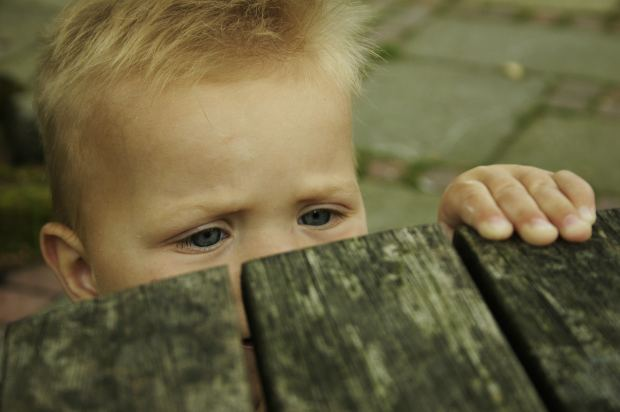 I am a Maths teacher and I can say with absolute conviction that history repeats itself. The reason for my belief in that cliché is an incident that happened yesterday in my class. I rate myself as a good teacher as I have a good rapport among my students. I never resort to physical punishments, but occasional impositions and time outs to face the wall are inevitable in this trade.

Maths being the unsettling subject that it is, my going has been some sort of  a roller coaster ride. No matter how cordial I was, there would always be students who wished I caught the occasional flu frequently or came under a speeding truck. I don’t blame such students because I had wished even worse for my maths teacher when I was at school.

I was never good at maths. In fact “never good” would be a colossal understatement. If I had known to make a murder look like an accident I would have murdered maths. As the universe has a certain penchant for irony I was doomed to roam the face of earth teaching numbers. So coming back to the history repeating itself incident, it was lunch break yesterday noon. Everybody has gone out to wash their hands not because they cared so much for personal hygiene but because it was the commonly followed norm. I left my file in the class and went back to get it. That’s when I saw history repeating.

I was in 4th Std. It was the time when I and maths were having serious differences. Your likeness to a subject depends heavily on the teacher that taught you. If that is true, then our maths teacher was not very well in invoking interest towards the subject. In fact he was doing everything within his means to sabotage my relationship with maths. He used to give copious amounts of homework which you could not even copy from others. And there was severe beating in case you failed to do it which I did every time.

The only maths I learned in his class was counting the number of beatings he gave me. And then there was this guy. There is always a guy. One who is the pet of teachers. One who ridicules you at every possible chance. One who is your nemesis. For me it was Varun. Even when our maths teacher forgot to give home work , he would duly remind him and then give me a sly grin. If I had known to use my finger then, I would have used it a lot. So one day I decided to teach him a lesson.

A lesson that was not in the NCERT curriculum. The lesson was simple – Don’t mess with me. Even though we were in 4th Std, we still used to write with pencil. Our teachers thought using pen will ruin our handwriting. If they had seen our hand writing, they would not have worried about that. I decided to impart my lesson on Thursday. Why Thursday?.

On Thursday, the maths period was in the afternoon. My whole plan was hinging on the lunch break. The plan was simple. I decided to erase Varun’s homework from his note book as if it never existed. I even bought a new eraser solely for this mission. I also somehow did my home work for that day. I had everything figured out. I would remind our teacher about checking home work that day and then enjoy the view of Varun getting beaten. I wanted a partner in crime. So I asked my best buddy to keep a watch outside the class while I carried out my mission.

So the D- day came. I had my eraser wrapped in my right hand the whole day. So when the bell rang for lunch break I waited with bated breath.  When everybody went out, I signalled my buddy to take position. I started searching Varun’s bag for the Maths note book. The bag had more note books than a paper mart. But I found the note book and frantically started turning the pages. My legs were trembling all the while. The confidence I had during my planning phase had vaporised with the stroke of the bell. But then I was dumb struck to find that he hasn’t done his home work. It was a rare incident like Haley’s comet, may be even rarer. I haven’t foreseen this possibility. I wasted some precious seconds recovering from the shock.

Then our maths teacher entered the class out of no where. I still could have gotten away if I had acted natural. But I had that “caught my hand in the cookie jar” expression written all over my face. I was caught red handed. The class turned into a crime scene. The evidences were plenty. I still remember the teacher taking the eraser from my hands with his hand kerchief as if it was a gun. I couldn’t say a word in my defence. He inferred that I erased Varun’s homework and Varun never admitted he didn’t do it in the first place. I got caught for erasing something that never existed. That was the first and last time I ever planned something. And as for my best buddy who was keeping vigil for me, the moment he saw the teacher coming he greeted him and walked away. The plan was he would cough three times in case of danger. He didn’t cough even once.

History Repeats / History Returns or Whatever

I went back to my class to get my file. When I was about to enter I heard someone coughing loudly three times. I saw Koshy tearing some papers out of a note book and placing it in Rahul’s bag. Koshy is the past me and Rahul is the past Varun. Koshy didn’t see me coming. So I sneaked out before he saw me. After putting the book back, he walked out of the class as if nothing  happened.  In a way I was happy that he executed his plan perfectly.

Whoever he appointed for keeping watch gave him the signal. But he didn’t hear it and I saw what he did. Apart from that it was ok. I didn’t do anything at that time. When I went to the class, I didn’t ask for home work. I saw Rahul opening his note book and looking perplexed. I started teaching keeping an eye on Koshy. He was getting restless. His whole plan hinged on me checking the home work and I had no intention of putting him out of his misery. He could not let his plan go to waste. So after some time he reminded me of home work. I told him that I will check it tomorrow. Sheer disappointment spread across his tiny round face. I was thinking about how to deal with the situation all the while. I didn’t want to humiliate him in front of the whole class. But I also wanted to make sure he learned a lesson and never repeated it.

When the class was over, I called Koshy to the staff room and told him my story. My point was how I paid the price for ruining some one’s hard work. The take home point was if you try to ruin some body’s effort you will have to pay the price one day. Some times on the spot like I did and some times some other day.

On hearing everything he asked me “ why didn’t you think about tearing off his home work instead of erasing”? .

I stood there speechless while he walked away.