You are here: Home / Childhood and Kids / Money required for sister’s marriage managed in style 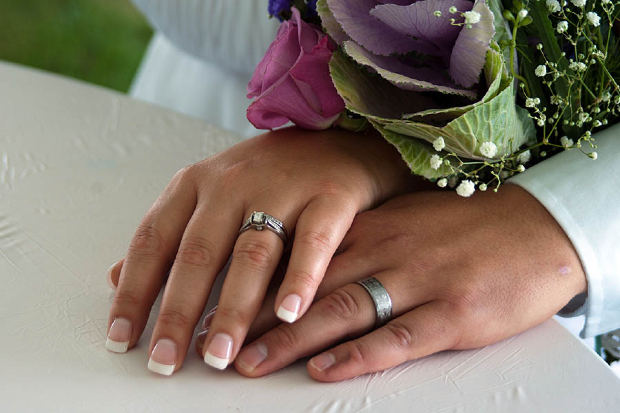 Once, for quite sometime, in East India, one Raja named SuryaKanta used to rule. His kingdom used to range from utmost north, Chadigarh to ultimate south, Shivnagar within this East India. His palace was so renowned for its beauty, that people from other places used to come to visit that. Raja was also personally very kind at heart compared to other rajas ruling during that period in other parts of India. He had different peoples managing his different monarchy jobs in his territory. So Swapnil, a poor guy from that place only, was also managing one part, the horses and stable, in his kingdom during his rulership. Swapnil though poor, was successful enough in attracting everyone’s notice along with that of raja’s by his skills in managing the horses. Each and everyone used to get paid on the basis of their performance and the difficulty of their work. Similarly Swapnil also used to get paid for his stuff, some around 50 bucks per month, which at that time was quite a fair amount. Swapnil also used to manage well, his, his mom’s and his one sister’s living by those bucks. So everything was going all fine.

However days were passing and Swapnil thought for his sister’s marriage. He got a bridegroom also, good enough, whom he used to know, working with him only in raja’s kingdom handling some other thing, willing to marry his sister. Since they were good friends, so his friend promised of not taking any bribe. So a poor guy like Swapnil was also happy hearing this, but at the same time for the minimum arrangement and decorations also, a few more bucks were required.
So Swapnil thought that, he would well explain the situation to the Dewanjee, who used to handle all the worker’s payment along with the total revenue of the kingdom, and he would give him some extra money for his sister’s marriage.

The raja was good at heart. If he would have been in charge of these money, Swapnil would not have had even been required to request him, and he would have given him the money. But if like this Raja started getting involved in all his matters, he would not have time for himself. So he divided among his various men. This Dewanjee again was rude and tough like rock. On hearing Swapnil’s problem, and that Swapnil needed some more money now for the time being, which he could gradually could cut in small parts from Swapnil’s salary at end of each month, Dewanjee was no way in a mood to agree to that. He said, he could better give leaves but not money.

Swapnil thought of going to the raja personally and letting him know his request, which again was tough for a poor guy like him to get to meet Raja. Even when Raja used to go out for a horse ride in the morning, there used to be a lot of men along with him and Swapnil, for Swapnil not being able to pick up the topic of his choice with the raja in secret. And if told in front of all, the Dewanjee could get annoyed with him, coming to know from one among them and punish him by doing some scramble with his monthly salary.

So Swapnil, thought of playing a trick with the Dewanjee so that he gives him some extra money he wanted and also doesnt get annoyed with him.

At one night when the Dewanjee was returning home in complete darkness, Swapnil from beforehand hid himself behind a tree. As and when Dewanjee drew near the tree, Swapnil started making some noise by hitting the tree with his hand, then rubbing the dry leaves with his foot, that were lying below, and tried to depict a picture that some two guys were fighting on something at the back of the tree but were unable to be seen in complete darkness. Naturally Dewanjee stopped a few distance away from the tree and started waiting for them to complete and go away rather than himself calling at them, as they could be doing some criminal offence and getting to know that this Dewan has come to know, might even attack him.

After sometime Swapnil again made a bit different noise to make an impression that one of the guy ran away. And then immediately Swapnil came out from the back of the tree, with a sharp knife, shining in the moonlight, in his one hand and fell down all of a sudden, in front of the Dewan to scare him. The Dewan also got quite scared and immediately took few steps backwards with a thought that this Swapnil in monitory pressure for his sister’s marriage has got mad and is killing peoples around, hurt somebody couple of minutes back and now attacked him, not getting the required money from anyone. Then in that motion only putting his hand inside his pocket started shouting in scare and asking Swapnil in a trembling voice, “O O please please dont kill me. Sorry. I am now fine with giving you the money for your sister’s marriage and also blessings along with that. Tell me how much you want?”

Then drawing some 100 rupee notes from his pocket he again continued in that same trembling voice, “Tell me how much you want. Take 100? 200? or rather take the whole lot. There is 500.”

Now Swapnil had surely played this trick to get the money, but he had no bad intentions  neither his request was unfair. Also he was willing to pay them back from his salary. So getting the money, he took and before the Dewan in scare could again proceed and give him complete ownership and tell that those need not be returned, he said, “No no wait..thank you sir for these bucks. It would really help me for my sister’s marriage. But as told in the morning, you could cut these bucks from my salary gradually in small parts each month. Also sir, for your information, I was not coming to attack you or kill you. I see you are so scared.”

Then throwing the knife away he continued, “Sir I thought of doing a last try by requesting once more going at your house. But while following you to your home, I suddenly luckily was able to notice one person covered full in a blanket, was coming towards you from inside the jungle with that knife to kill you. I quickly went inside the jungle and caught him from back and fought with him, before you could reach here. He seeing his grip losing the knife, left it with me and ran away. But then when I was coming out from behind the tree, to tell you all these, my sandal got stuck with the banyan tree’s hard root and I fell down.”

The Dewan got reliefed, but since already gave the money to Swapnil, dint ask the money back from him, considering it to be his gift to Swapnil in exchange of saving his life, thinking the story narrated by Swapnil to be real.