You are here: Home / Childhood and Kids / Owing to a poor person counts more curse 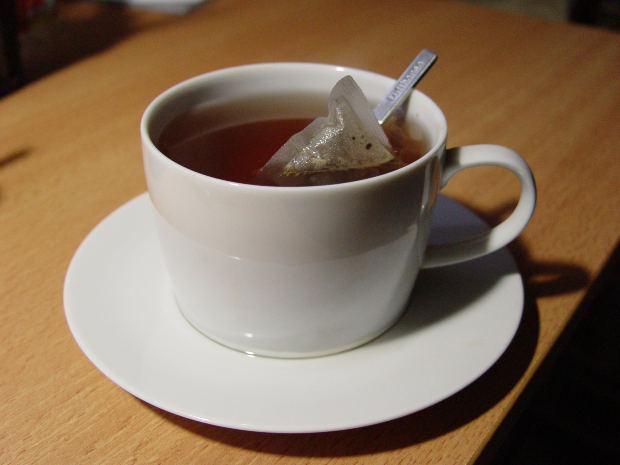 One morning Swapnil went for his morning tea to the tea shop. It was winter and Swapnil was quite early to be there. So naturally he was alone. The shopkeeper also just opened the shop. So Swapnil agreed to wait till his cup of tea was prepared.

Swapnil took one seat in one of the benches lying in front of him. Suddenly he saw that the shopkeeper after putting the bowl of milk on gas to boil, started coming near Swapnil. That was not the first day that Swapnil was early, alone in the tea shop, but never did the shopkeeper come and chat with him. He ofcourse welcomed Swapnil and then like that day giving the milk to boil, rather started arranging his other shop items other days. Swapnil pretty well understood that this shopkeeper though never came to Swapnil for any of the solutions to his problems till now, but was well aware that if he is in some great danger any day, its Swapnil only who could save him from that, just by listening to all the solutions Swapnil used to give to his friends till now sitting in this shop. And then this shopkeeper though must had been busy serving other customers or with other shop items, was the only constant, consistent spectator cum auditor.

So this shop keeper today must be in some problem and thats why is his approach towards Swapnil. Swapnil also recovering from his astonishment, welcomed him and allowed him to sit beside him. The shopkeeper continued, “Swapnil baba, you must have, as usual, come to know that, I have just not come to you to chat with you, but to ask for a solution to one big problem of mine, of which kind I have not undergone till now. So could you please help?”

Swapnil affirmatively nodded his head and told him to narrate.

The shop keeper told, “You must be knowing this Haru, who also comes in my shop daily to have tea and other eatables. He is not in your group, but comes in with some other group or mostly alone. Now Swapnil, you know, that I like other tea sellers have given the option to keep debt and pay the amount together later, after it becomes a bit huge. This way it also helps me. Because we poor whenever get money tend to spend it. So like this we cant save anything to do something big for the family. So if the amount becomes huge or in other words, people save for us and then give it to us, we then can have something to do big.

As because the other days without the money we still could manage and control and restrict ourselves from doing regular day to day small enjoyments, as we dont have the money itself in our hand, which we cant if we have the money handy that time. And after getting the money we wont be doing that small enjoyments for a day which we have already missed and passed. So now all except this Haru do pay me after a certain period of time, mostly at the end of the month.

But this Haru has not been paying me for long, say since last 4 months. Now his debt also has become around 1000 rupees. Now if he gives one day, still its fine but I fear if he suddenly vanishes one day without paying me and moreover his debt is still increasing as he still comes, eats something and drinks tea and doesnt pay and go away. Now I have one principle, though not good for any businessman also a poor one like me, I dont ask for my money from my customers. I again fear of losing those customers. Money everytime doesnt matter, but the relation also sometimes talks, which I would be losing then the most. So do you have any solution with you for this in which I need not tell him for my money and still he would give and continue coming to my shop still. Hope you understand that if I dont like telling, I wont like others also to tell on behalf of me. So some other solution.”

Swapnil nodded and said, “He would come and pay the money to you casually as if he was about to pay, by tomorrow and also continue coming to your shop still then. You need not tell anything, but I would. Also be rest assured that I wont tell him to pay directly which you dont like. I need to play something with him. Dont worry. Give me the tea. I would have it and go set out for this only immediately.”

The shop keeper smiled, gave Swapnil a cup of tea, which after drinking, Swapnil went out.

Swapnil was thinking only to meet Haru, but was unable to find out the way in which he would be. He has indeed met him before and have spoken few words with him as well. Just a tea shop friendship was there between them. Fortunately Swapnil on his way only got to find this Haru. He stopped him and said,

“Hey Haru, I was looking for someone of your group only. I have personally informed all other groups who come to the tea shop. There’s a bad news. Kamu has been seriously injured and been hospitalised.”

Haru in turn asked, “Who is this Kamu?”

Swapnil said, “O you might not be knowing. He also used to come to our tea shop. You might have seen him but dint know his name. Since we were like a unit, though belonging in different groups, all coming to the same tea shop, thought of informing all others who come to the tea shop, about this. If anyone is willing to go and meet him.”

Haru said, “Ok, so what happened? How was he injured?”

Swapnil said, “Actually the one whom we used to think to be the owner of the tea shop till today, is not in actual the owner. His brother instead is the owner. Actually they are two brothers only. Both are poor but the one who sits, means Runu da is more poor than his brother. Also this Runu da’s brother, Kanti da is very lazy and wants to sit and earn. He had some money also. So what he did, he made this shop and kept his brother to do business in that. Thus his brother’s poverty could be somewhat diminished and most importantly since its his shop, he would at the end of the day earn most of the income, and that too sitting at home. After whole day whatever total comes, he would take 90% of that and give only the rest to Runu da. So like this Runu da still is poor, gets less and works hard more. But he had no other option also to go and work somewhere else and that is again because of this Kanti da.

This Kanti da is ruthless by heart. He would be beating his brother if he cant sell upto his expectation. Now Kanti da also has the understanding that he would be getting a bunch of money at the end of the month, rather than getting it in small chunk daily. So only Runu da let us know the same. But last month what happened. This Runu da failed to give the amount Kanti da expected at the end of the month, thinking that Runu da couldnt do business properly. So he beat Runu da black and blues. In pain, Runuda though tried to refrain from telling, at last told that one person is yet to pay back for the month. Dont know whether that was the only person or not, but Runu da told about just one person. He knew that still Kanti da would suspect to have some more not paid, but to stop him for the time being, told just one name.

Now while telling, Runu da never thought what would be the consequence and so among his list whatever name came to his mind first, he told. And that was of Kamu. Immediately Kanti da took one stick and went in search for Kamu. He found him also and beat him in front of all. I have also heard that this Kanti da also have friends in police, so would never be arrested. Also this Runu da from now would try his best to not to tell this reason anymore. But you know this Kanti da had also now come to know this reason of less income. He would surely ask at least for once to confirm whether this is the reason before suspecting Runu da’s technique of doing business.

And then his third degree, I think would be too hard for Runu da, why only Runu da, I feel for anyone, who had had been there in his place, to control. He would automatically speak out few more names. But still I think just looking at Runu da’s pain I would continue visiting his shop again and again. As because now since Kanti da has got some idea of number of customers, he would again beat Runu da thinking he had not done business properly, if we leave. Also Kanti da is ruthless, not Runu da. Where would we get this good behaviour like his in any other tea shop? Also Kanti da might even find the customer also out and beat him for leaving his shop, just like if he doesnt pay his debt. What it needs for me to actually do is to pay the money at the end of the month with whatever I am debted with.

Other than this we wont have any more challenges. Also where else would I get to have my group? All cant change shop at once. Also what’s the guarantee that there also wont be some other bad problems? Anyways, I would take a leave now and go somewhere else. I am in a hurry. See you soon in the shop.”