You are here: Home / Childhood and Kids / The Steel Bowl 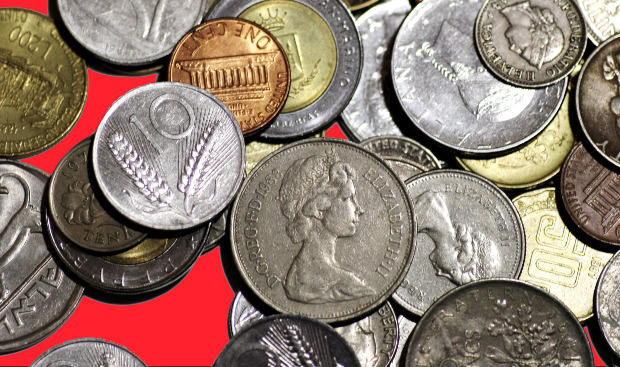 The coins made a noise against the steel bowl.
Shielding his eyes from the sun, the little boy smiled gratefully at the suited man in the big, black car.
Once the light turned green, he moved away from the threatening traffic and sat on the pavement.
Four coins at this signal.
He shuddered.
His master would not feed him tonight.
With the fear of having to go hungry for one more night, he got up and started his routine again.
The sunlight scorched his delicate skin through the holes of his tattered grey shirt.
That morning, his master had given him the shirt, three sizes too big and had asked him to tear it at random places to make it look worn out. He had then been made to rub his back against a dirty wall that made him cough but only managed to anger his master further.
As the signal turned red, he knocked on the closed window of a car.
But the ladies inside just shooed him away.
Attack the women, his master had told him. They’re the weak ones.
He had not wanted to.
Each of these women reminded him of his own mother, a woman he wasn’t allowed to meet for more than fifteen minutes a day.
He remembered the brief conversation he had with her that morning.

“Oh, darling,” She had said, holding him close. He hadn’t liked the feeling of her bare waist against his forehead. He hadn’t approved of the clothes she was being made to wear. “Look what they’ve done to you!” She had wailed, her eyes brimming with helpless tears.
“Mommy? When can we go home?”
She had shaken her head.
“This is home, sweetheart.” She said. “This is where we live now.”
He shook his head, biting his lower lip to stop himself from crying.
At a distance, he heard his master’s voice call his mother.
“Tuts,” His master said. It sounded like a weird name. “Your client is here.”
His mother had turned to look at the man, her long earrings making a lovely jingle.
She had then kissed him on his forehead and walked away, wiping her tears.
He watched as his master put his thumbs into the waistband of his mother’s skirt and pushed the skirt lower.
It made him cringe but he didn’t understand why.
His mother had closed her eyes and taken a deep breath.
Then, turning to her son, she had waved.
“Does daddy know?” He had shouted, but she didn’t hear.
So, he had just waved back into the air.

The little boy did not understand why his mother was spending so long with those random men and what they were doing, though once, he had questioned her.
He remembered the look on her face, her eyes trying to withhold the strength of her terrible secrets.
“They pay me very well, darling,” She had said, finally, “I just have to do what they tell me to for an hour.”
“What do they ask you to do, mom? Do you play games? Is it fun?”
She had just patted his head then and kissed his forehead.

Now, standing under the scorching sun, he had decided one thing.
He would earn enough money to save his mother.
He would be her superman.
As a woman on a two wheeler handed him a tenner and ruffled his hair, he gave her his best smile.
A new kind of confidence filled the heart of this poor seven year old.

“Sir, please sir! I just need one coin. Please.”
He stopped his cycle and looked back at the little girl begging.
Her hair was messy and specks of dirt could be seen on the top of her scalp. She was wearing a cute frock that looked dusty and old.
It reminded him of a time, ten years ago, when he had been in the same position.
She had a steel bowl in her hand that reminded him of his own, from his years on the street.
He still had his, in the corner of his home, to remind him of a time that he never wanted to experience again.
Now, he was still battling with poverty, but he and his mother were finally together, in their own little hut that he had built for her from scratch.
His clothes were still worn out, but they were ones that he had bought for himself.
This new found freedom was more than he could have ever asked for.
Digging into his pocket, he pulled out the only two coins he had earned that day and gave them to the little girl.
She beamed at him, thankful.
One day, he had decided, he would abolish begging in his little town.
Determined, he cycled his way towards a life full of hope.